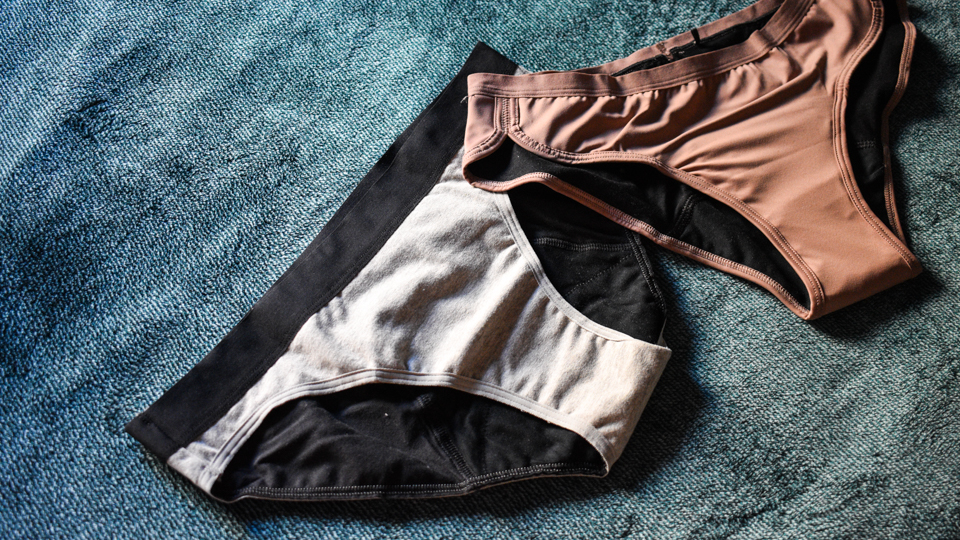 Thinx would have been nice to have this around when I was much younger, instead of in the waning years of my fertility. (Cue crickets.)

The bright side is that we've all got lots of great younger sisters, nieces and daughters down the line that can benefit from the period undie. Progress has been made.

Though the period undie has been a thing for a bit, it wasn’t until I decided to move toward more environmentally-conscious and sustainable products that I decided to see, if yes, Thinx could replace the entire period experience.

Single use products, generally, just aren't great from a cost-conscious view. Could it also possibly save money, had I been more cognizant and thoughtful about it in my earlier babymaking years, even though we are talking about shelling out $30+ a pop for underwear? (Yes.)

May I also one day travel back in time and done the smart thing by investing in a full set of period underwear five years ago? Probably not.

Sizing up materials, fit and wear over time

In the beginning, there was one. After a few years, there are multiple types of period panties of all shapes, sizes, and materials to capture Aunt Flo at her worst.

The classic Thinx underwear (though there have been upgrades to a super duper one) is comprised of nylon, cotton and elastane (5-11%). The bulk is mostly nylon, while the gusset—or the crotch area—is mostly comprised of cotton. The gusset is pretty well reinforced with extra layers of material, and almost doubled up to capture any messes.

(Surprise, there are things going into that area?)

The main difference between the different Thinx types mostly lie in the exterior fabric used, with the gusset remaining more or less the same, though there are variations in liquid capacity. 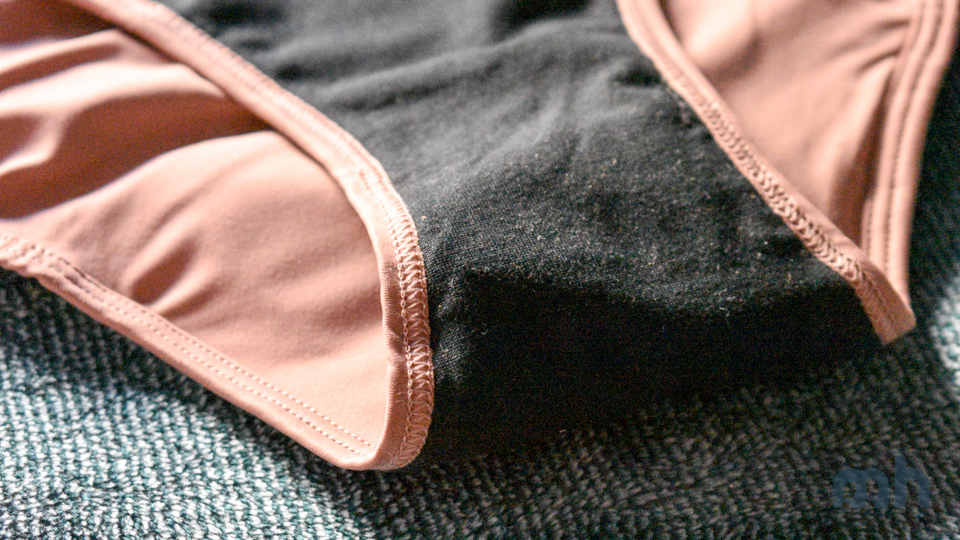 Mostly, wearing Thinx sort of feels like wearing a swimsuit bottom, though it's slightly more comfortable than that.

Pro tip: Thinx runs true to size, and though its tempting to size up, remember its a great idea to keep things *secure* down there. The sizes are pretty standard across the Thinx products, so if you're an XS in the classic Hiphugger style, this will also apply to the Cotton Brief.

Most of the underwear has decent longevity, lasting at least for several years. It is still impossible to tell you if the undies will last past five years at this point, given the company was only founded in 2013. Though the ones that we have date back, they are starting to look a little worn.

By far and large, these work though the most common complaint that we've heard is that the underwear can get particularly itchy after prolonged wear. For optimal comfort, the suggestion would be to change the underwear between every 12-24 hours (I mean, how long do you want to sit in your own blood?).

The one thing that seems to be very, very common in the "wear and tear area" is that it is not uncommon for the gusset to discolor in the crotch area. In our case, it happened after three or four cycles before the "stain" started appearing.

Thinx clarified to us this is natural reaction between the material and pH variances inside the body. More or less, what seems to be happening is that the acid in the vaginal discharge bleaches the natural fibers of the underwear.

The company clarifies the issue in a corporate blog post:

As you may know, vaginas have a naturally acidic pH, and for some folks, that acidity fluctuates so that it interacts with the underwear’s fabric, causing those bleached spots. This a totally normal thing, and it’s actually more of a problem if your vagina isn’t acidic enough than the opposite.

Besides, I hope we aren't *sharing* period underwear, here?

The cost of buying pads and tampons

For starters, I have never thought about buying the cost of pads and tampons. All I know is that when a pack runs out, it's usually an emergency run to the nearest drugstore or retailer.

(It also includes some makeshift options to, ha, tide me over until I get there, because I am a poor planner.)

It's hard not to balk at the $34+ price tag for a set of period underwear. That said, Thinx does offer several discounts for those looking to cover their entire cycle.

(Our recommendation: Splurge on one, and see if you like it. Then go ahead and build that set!)

Here's a pretty basic calculation on what you might expect the savings to look like, considering the average cost of a panty is $36.14.1

(For instance, our collection of four panties cost $130 total, but rang up to $117. It does depend on the exact selection.)

For the record, I actually don't expect that most people need beyond three or four Thinx panties, so we're going to assume most people will buy three and then panty-liner the lightest days.)

Curious as to how much money it would actually save us, we calculated some pad costs based on the price of this 52-pack of Always Ultra Thin Overnight Pads at $10.79, or 21 cents per pad.

Depending on how many pads get use per cycke, here are some estimated costs over the years and months. Based on this, those with heavy flows and in their late twenties or early thirties should definitely invest into a set of Thinx to cover their entire cycle.

(Every scenario above $100 has been highlighted, since that's where we estimate the savings will begin to kick in).

The players during Aunt Flo 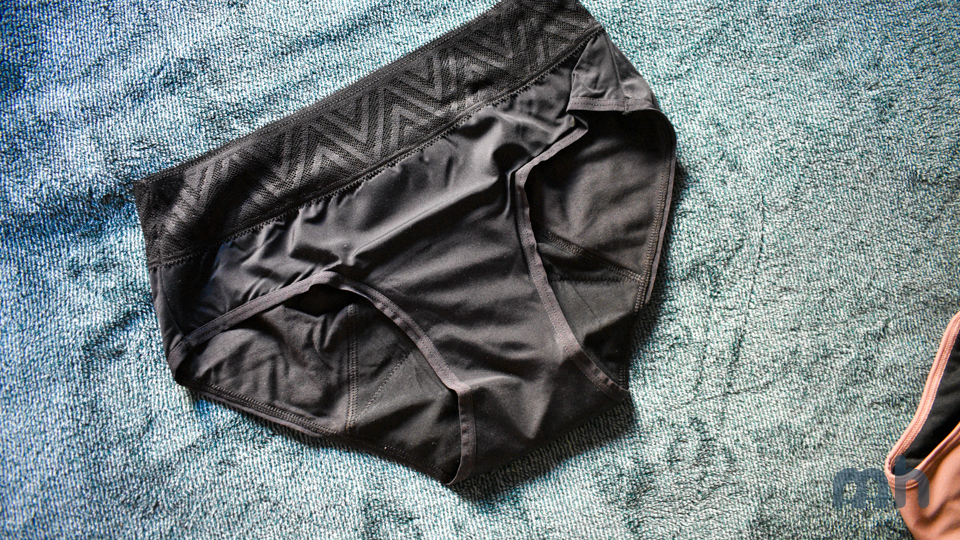 There, of course, was underwear involved in the testing of this article. Most of them performed quite well, sans pads, but we also definitely had our favorites.

The four we looked at were the Hiphugger, the Cotton Brief, the Sport, and the Air Hiphugger. It would tempting to generalize and say they were more or less all the same, but there were enough slight variances to make notes between each.

(FWIW, it’s also the order I would use as my period progressed. The average length of my period is four days, plus or minus,2 and we will be noting them on which days we think you should wear them, though, of course, it is entirely up to you how you want to do it.)

But to break it down even further...

If it ain’t broke, don’t rock the boat. These are the OG set, and though it’s gone through a few changes over the years, these continue to be Queen. If you’re only going to buy one pair, buy these.

This particular pair is comfortable and durable enough that if I only owned one undie, I would save these for my heaviest day due to how uncomfortable my period can be. (Since I often think of my first day as a visit to Niagara Falls, that’s saying quite a bit. Putting on Thinx feels like putting on rain protective gear.)

The absorbency is substantial enough for a full 12-24 hours on the rag, though it does get slightly uncomfortable (and a little scratchy) for any longer than that.

Likewise, if you’re going to buy a set, make sure these are included.

The Cotton Brief style are my next favorite after the Super Hiphugger, and actually in fact, if my flow wasn’t so heavy, they might be even my first pick.

In whereas the Super Hiphugger can feel a little bit like wearing a bathing suit bottom at times, the Cotton Brief is a cute, comfortable style that can be worn every day, sort of like wearing a favorite pair of pajamas or leggings every day. 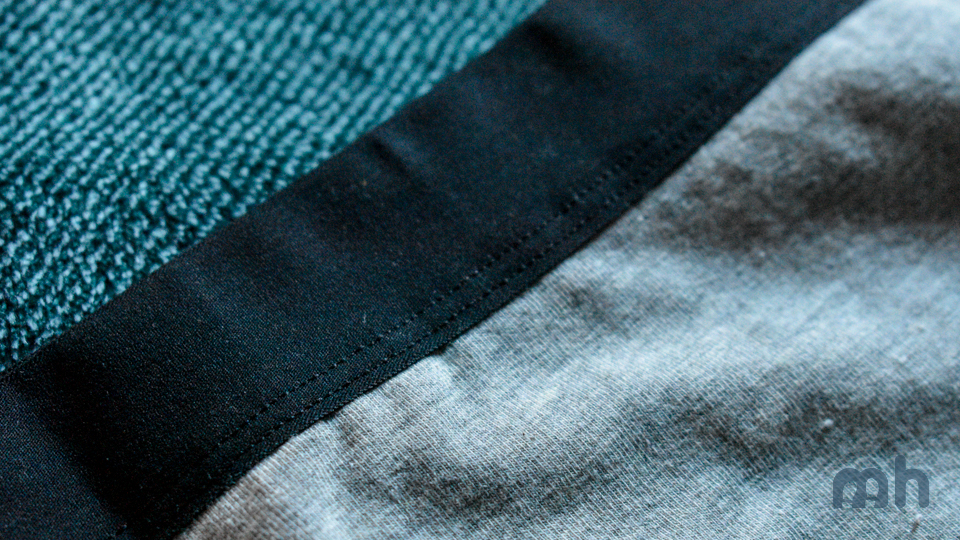 In terms of personal preference, I like to wear these on the second heaviest day, because it is likely I will still feel slightly uncomfortable in my flow. Though I kinda wish I had two or three of these.

Strange as it may sound, these were the most anticipated of the bunch. Busting a move on the rag is… well, just terrible.

Being a frighteningly, extremely active person, being on my period restricts my exercise activities, figure skating and ballet, which for the most part, is incredibly high intensity. These activities are a core part of my weekly routine, and its something I do three times a week, so encountering one of these on my period... was more than likely.

However, after wearing this, this happened to be the most uncomfortable of all the styles that we tried. I'm not sure whether that this designed to be a temporary wear, but there is a thread along the middle inseam that has a tendency to irritate my skin. It was serviceable after snipping it off. 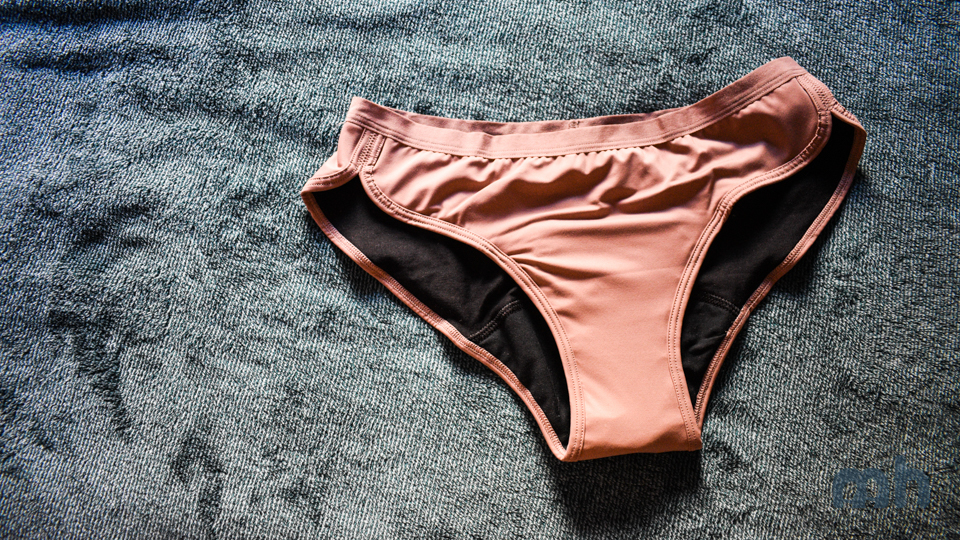 There’s a way that it actually angles up into the inner thigh that is not particularly pleasant, though it is going for that sporty look. In this way, it actually becomes more of an irritant, because it does NOT feel seamless donning on leggings or tighter-fitting active wear.

This might be a better fit, for say, a runner, or short wearers, but I found it quite annoying to feel something bulging when I needed to focus on my line.

In short, this fell slightly short, though the Dusk color was particularly cute?

I'm not a big fan of the "air" marketing nomenclature, thanks Steve Jobs.

The Air Hiphugger is perhaps the most different out of all the products that we tried.

The main difference is that it has a bit of a mesh exterior that allows for faster wicking and drying compared to the average Thinx underwear, making it the best one for re-wearing during the same cycle (though it should be spaced spaced several days apart).

In terms of care, Thinx should really be hand washed on the first run, and then laid down to dry.

It's great for pantiliner days, to be specific. It's also great for traveling, whenever we get back to that. But, it's definitely not a heavy hitter when it comes to carrying weight when you need the real MVP to show up to save the day.

If you think you might use Thinx for more than five years (ideally, 10), definitely invest in a full set as it will be cheaper in the long run.

Most of the undies are far more comfortable than wearing a traditional pad or tampon, with substantial coverage, but look into the differences between each product.

The underwear do also seem to last a while, at least for a couple of years if you're only wearing them twelve times a month.

For $10 off, consider using this referral link.