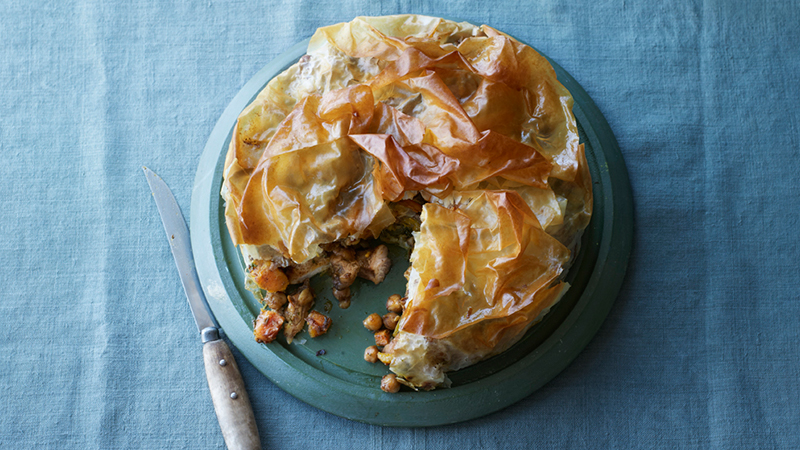 Forget pumpkin pie, how about kicking off the most gluttonous season of the year with a recipe from the first woman who flew around the world?

In a modern world where it is shockingly easy to be defined by a single action, Jerrie Mock shied away from the limelight and accomplishment, and instead, chose to revel in the things that brought her delight. One of her favorite hobbies? Cooking.

One of Mock's (other) goals was to write a cookbook, and her granddaughter, Rita Pike, notes a particular Moroccan chicken bastilla and couscous dish that frequently appeared in the familial repertoire. It was from Mock's journey around the world where she first discovered the dish, and savored it.

Morocco also happened to be Mock’s third stop in her flight around the world. According to the Smithsonian, Mock feasted on Ramadan soup, pigeon bastilla and couscous on her two days in Casablanca.1

Bastilla, a North African meat pie of sorts, is made with warqa pastry, reminiscent of phyllo dough. This is code for being that it's okay to be human and buy phyllo from the supermarket, instead of being on The Great British Bake Off.

Throughout life, Mock reportedly often used recipes as a "jumping off" point. Befitting for a woman that clearly thrived in the unknown, and if you yourself, of course, want to pull out all the stops!

It’s okay to be human and buy phyllo from the supermarket like a normal person. But it's also okay to be psycho and let's be real, attempt to make warqa from scratch too.

The point is, I'm hungry, and Jerrie Mock was an awesome cook aside from being the first woman to fly across the world.