You could argue that spending money on a travel spork is either one of the most useful or useless things ever. I live to eat so I don’t care.

Sure, I could just pack a normal fork in my bag and be done with it. It’s certainly a cheaper way to go. But there’s a big, wide world of street food out there and sometimes I just grab my food before checking if I’ve got like… actual things to eat it with. Either the guy selling my curry fish balls is just like, “Sorry, come again later!” in broken English or there’s a 900-person line before I can get any water or attention. Then it pays to be prepared. This is one of those little life things people fail to appreciate.

In that respect, humangear, known for its travel tubes, produces a whole line of travel products including portable cups, pill boxes and yes, eating utensils. In particular, its GoBites line focuses on the Uno, Duo and Trio, respectively named for the number of pieces in each kit. The company sent us samples of the Duo and Trio, which retails for $7.49 and $12.99 on Amazon. Between the both of them, the Duo toes the line between portability and functionality the best.

In general, the handle is wider than a typical spoon/fork while it’s also shorter in length compared to its full-fledged brethren. I do personally think that humangear could have shortened the handle length slightly for more compactness. However, the handle length isn’t insanely long and actually fairly close to a full-sized knife and spoon (as opposed to most travel sporks I’ve seen). This makes it easier to wield. 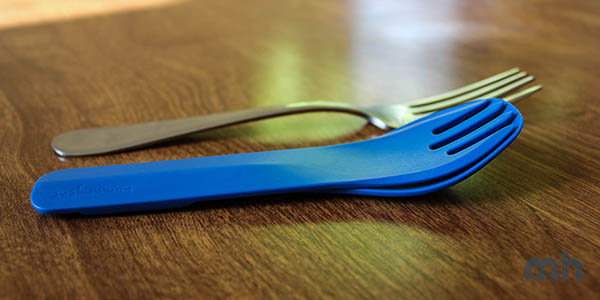 The GoBite Duo is still shorter than a normal fork.

The sporks are made out of high-strength nylon, which is about as TSA-friendly as it can possibly get. I used to travel frequently with a foldable, stainless steel spork but it’d constantly flag me at security so I’d always have to hang around afterwards to answer any questions (most officers just wanted to double-check it wasn’t a knife). It’s possible, actually, that a normal fork would also run into these issues but in all the times I’ve traveled with the Duo and Trio, there hasn’t been a single issue at a security checkpoint.

In general, in travel form, the spoon secures itself to the fork by sliding behind the two ridges on the fork’s back. This is reinforced by a slightly elevated ridge on the bottom of the spoon, which creates a nesting effect between the two utensils. In general, it feels solid — like I’m not gonna lose anything, which I always do. It’s also possible to have the handles end-to-end for a long, extended Uno. This is great for things like, um, stirring pots, if that’s something you’re gonna do while you’re traveling, I guess.

There are a couple of reasons most people should opt for the GoBites Duo over the Uno or the Trio: first of all, the Uno is longer than the Duo because of its double-headed position, increasing its footprint. There are less moving parts with the former but the Duo pretty much solves any of these issues with its unique attachment method. The Duo also allows hungry hungry hippos to use both utensils at once, with one utensil functioning as a hold and the other as a separating mechanism. This is a significant advantage of the Duo; I’ll get more in-depth in a bit.

My biggest issue with the Duo is its lack of a hygienic cover. There’s just no obvious way to keep the Duo clean, short of slotting it into a Ziploc bag or wrapping it around a napkin. (I prefer the latter because then I can use the napkin later to wipe cupcake off my face.) This doesn’t seem like a huge issue for humangear to address; in fact, it’d be great to see the company provide a small plastic piece that covers the small head of both utensils.

In general, though, its two-piece build serves the Duo well. I found that the spoon often acted well as a knife in its stead, provided whatever I was eating wasn’t burnt, too difficult to pull apart or had too much bite. Meats like chicken fared excellently under its expertise direction but foods such as asparagus were often difficult to break into small pieces.

Here’s how my meals broke down, whether I was on the road or at home, because truthfully, it doesn’t matter if you’re doing a three-course meal on the N or in someone else’s kitchen:

Sue me, I’m a born-and-raised Californian.

Actually, my first and real worry was how I was going to eat the chicken tenders. I shouldn’t have worried: the chicken was at least tender enough for me to use the spoon in place of a knife to separate the chicken as I held the other side down with the fork portion.

This didn’t work quite so well with the asparagus. I just used the fork to throw some stringly, uncut bits of asparagus in my mouth. Thank God I have no hot man around to impress.

The tofu was a little overcooked and rubbery from the prep work I had done but I’m sort of digressing here. It was still good and I managed to get all the healthy deliciousness into my digestive system effortlessly.

I also accidentally put way too much chipotle mayo on my plate.

Verdict: I should have kept a closer eye on the chicken in the toaster oven. 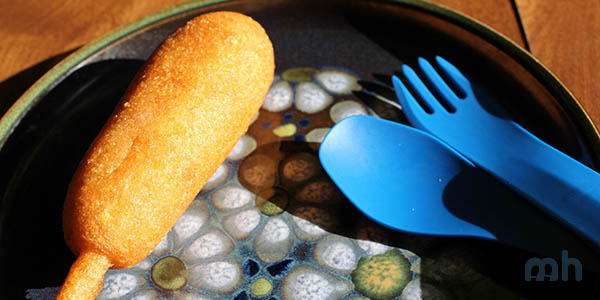 Hellllooo, how snobby do you think I am?

Chicken quesadilla, with side of avocado.

There weren’t a ton of issues here. Again, the spoon has to double as the knife but worked fine in its stead.

I sorta went back to my Asian roots for this one.

This was an interesting experiment testing the depth and capacity of the Duo spoon. humangear estimates it can hold about ~1.5 teaspoons and that seems about right because the spoon is simultaneously fairly wide and shallow, limiting its actual volume. Most impressively, I managed to plunge it into boiling soup to stir my meal without any issues of the nylon melting. Because the Duo isn’t made of metal or steel, there is also less likelihood that you’ll scald your tongue with the Duo. The soup still can, though.

Meanwhile, hungry hungry hippos may find it frustrating that it doesn’t have the same depth as a proper soup spoon. Don’t get me wrong: It is sufficient for the task even if it’s a lot better suited for eating solid foodstuffs like rice or grains. Not that you can’t use it for soup; it’s just not 100% optimized for the task. 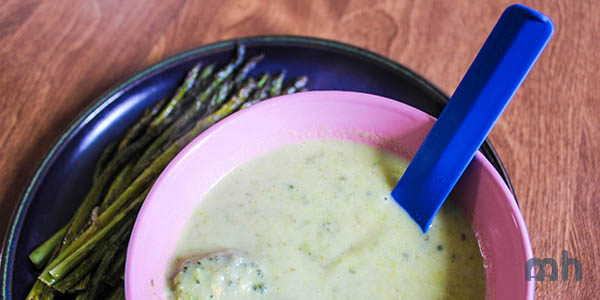 Cause I’m a fattie.

Cause despite all my attempts at dieting, a girl still occasionally loses willpower. Cheeeese.

Again, the same issues prevalent using it for soup reappeared. It definitely doesn’t have that good depth a good soup spoon has, meaning there needs to be more “scoops” needed to get the same amount of sustenance in my body as a regular soup spoon. I did not test and count how many scoops I actually needed to get the whole bowl into my system as opposed to a regular soup spoon. I am not counting how many licks it takes to get to the center of a Tootsie Pop roll here.

The GoBites Duo is an appropriately-priced travel eating utensil kit. It goes in and out of airport security without a hitch, which is often a problem with its metallic competitors. The attachment system is also great for keeping both pieces secure while retaining two-utensil functionality. Most importantly, it lets me enjoy meals in peace without feeling like a hungry, hungry hippo.