Is it a pill box? A travel cup? A portable measuring cup? Do I even need all of this shit? That’s at least the premise of humangear’s GoCup. If that’s too crazy, the GoTubb is an option.

Humangear is best known for their GoToob travel bottles but I have issues coughing up $20 for plastic bottles. In fact, some of their other products are more reasonable for what they offer relative to the price such as the GoTubb and the GoCup. The GoCup may be the Swiss army knife of travel pill boxes out there but the real value may lie in the GoTubb, which comes in a set of three.

Now, let’s figure out which one of these “pill boxes” are right for you. 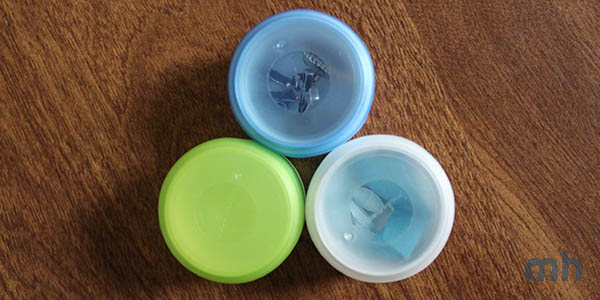 The small GoTubb is only able to carry .5 ounce (15 mL). It measures 1.2 inches in diameter (3 cm) and weighs .2 ounce (5.7 ounces), about the size of a quarter. The medium—which is a bit of misnomer because there is no large—is a bit better and holds almost six times the capacity at 2.94 ounces (87 mL). There’s a bit of a tradeoff, there, too because it also measures 2.8 inches (7 cm) in diameter, which is practically the same size as the small GoCup. It weighs a little bit less than one, though, at .7 ounces (19.8 grams).

The easiest use for these containers are pills. These are perfect for taking my travel meds with me, though don’t expect to fit a ton in there. One tub can contain about 20 to 30 small pills or much less if you’re sticking some big pills in there. Perhaps my main complaint is that there is no easy way to separate several different types of them but I guess I don’t expect magic. 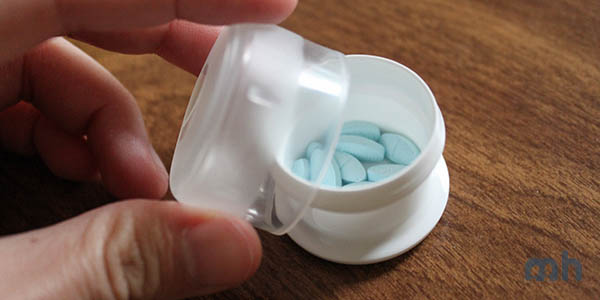 My teeny hands for perspective.

Aside from that, they’re also great to keep small jewelry and earrings from getting lost, which happen a lot in large purses or a carry-on purse. humangear notes that there are tons of uses for them, including packing spices. (This may be how I packed my cinnamon and ginger for the pie on the plane.) For the most part, this is actually how I’ve used the three GoTubbs that came in my pack.

Interestingly, humangear claims GoTubbs aren’t designed for carrying liquids, though some reviewers have noted that this is possible. To test this, I filled the GoTubb with water and shook it vigorously, as hard as I could. It is not waterproof but it does do a pretty damn good job of holding it. Imagine hanging outside and feeling some questionable moisture on your face but not enough to know whether it’s really raining or it’s all just in your head: that’s the amount that escapes if you weren’t paying attention. For relatively stable trips, I wouldn’t be entirely surprised if it did hold liquids securely. In fact, given how hard I had to shake, I would definitely chance liquid in a GoTubb.

Some people note the larger GoTubb is perfect for creams, gels and other liquids given the fact it’s under 3 ounces. In fact, it practically seems perfect for soaps, facial creams, shampoo and conditioner bars. The main issue with that is that the capacity isn’t clearly labeled, unless you want to measure everything in CCs. If you have an issue with the TSA, chances are you might not win the argument though people have reported that they have gotten through security without any issue. 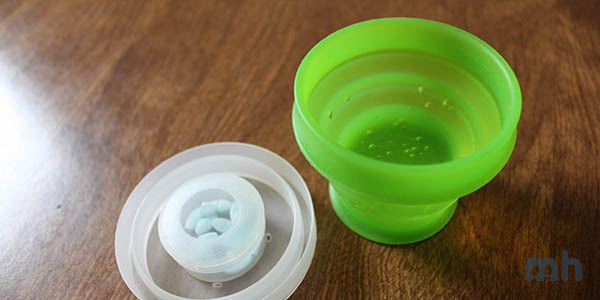 The GoCup comes in two sizes, small and large, retailing for $9.63 and $10.85 on Amazon. The small contains 4 ounces (118 mL) of liquid and weighs 1.5 ounces (42.5g) dry. The small sample that we received from the company measures just under 3 inches (7 cm) in diameter with the internal pill box measuring around 1.5 inches (4 cm) in diameter. It’s unclear what the volume capacity of the pill box is but it seems to be about the same as the small GoTubb.

In comparison, the large version of the GoCup can contain up to 8 ounces (237 mL) and weighs 2.5 ounces (70.9g) when it’s dry. The large GoCup is reportedly a lot bigger than most people expect so the small size is the most travel-friendly. Imagine carrying a full cup of liquid and you get the idea.

It is also available in four different colors such as clear, green, blue and black and made from FDA food-grade silicone, making it dishwasher-safe. Perhaps the nice thing is that it’s leak-free and condensation-free. It’s one of those tools that you want for camping, if you’re a germophobe, dislike water fountains or need portable cooking supplies. (More on that in a bit!)

The lid contains the chamber where the pills are stored, though it’s just a normal lid unlike the GoTubb design. In the larger “DoubleDecker” version of the cup, there seem to be two chambers to separate two sets of medication. I don’t need much: my sleeping pills, Dramamine and some Advil. Thankfully I’m also young enough to be able to distinguish between them. I never had an issue with the GoCup supporting the full amount of water in the cup.

There’s a couple of unique features to the GoCup I really like. Though it may not seem apparent, on one side in the inner part of the cup are measurements for varying levels of mL at 25, 50, 75 and 100 mL. The other side contains cup measurements for ¼ cup, ⅓ cup and ½ cup. The same side also contains measurements for one or two shots (in case you were feeling frisky). The larger version of the GoCup will obviously have different measurements because it is double the size. So in terms of usefulness, not only is it a plane or bird, it is also the perfect portable measuring cup for a travel spice rack.

The main drawback (or asset?) to the GoCup is that it’s not really designed for carrying liquids. This is amplified by the fact that they are four vents in the top of the lid, which I assume is there to allow the cup to safely and sanitarily dry so bacteria doesn’t breed. Perfect for glamping by a river. I never liked carrying liquids around in my bag anyway; the last time I dared to, some salsa exploded in my purse because I thought I could beat the liquid gods at their own game.

The other downside is that it’s not really possible to drink hot liquids in it. I mean, you certainly can, but the real problem is that the middle part of the silicone can actually become too hot to hold. Not that it will melt like the Wicked Witch of the West. In that regard, if you were outdoors, you’d have to let your boiled water to cool down some before attempting to drink up like a king.

That said, bourbon does taste great in it.

Both the GoCup and GoTubb are solid products in their own right but if you have to pick one or the other—unless you really need four pill boxes lying around—I’d just opt for the GoCup. Its versatility makes it the best portable and travel option despite its much larger footprint. In both cases, though, go for the small version of both the GoCup and GoTubb. Fill me up, flight attendant!