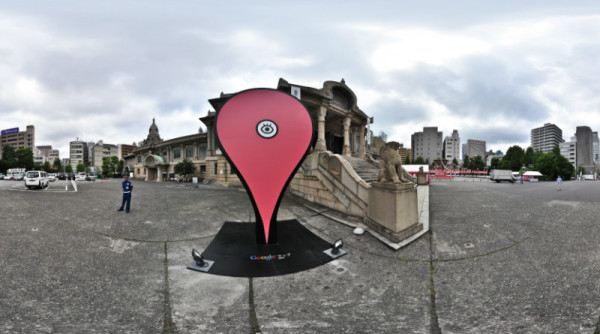 Guess what! Google Maps has a hidden offline feature that can be used anywhere.

It may be 2015 but Zuckerberg’s mission to get the whole world on the Internet has yet to be fulfilled. Thankfully, Google Maps has a dark horse ready to ride us out of the Internetless-danger zones — OK Maps. This rarely talked about feature allows smartphone users to access Google Maps even when there is no Wi-Fi or data services available, for both the Android and iOS version of Google Maps. The only catch? You have to save the map ahead of time.

I wanted to give the tool a try to see how well it would serve as a guide when the Internet has betrayed me. To my surprise, OK Maps is remarkably easy to use. The only major downside I found was that saved maps are well, just maps: raw, downright simple maps. It does not allow users to route directions or search places offline and only provides a visual of the place you save. It’s basically an old school paper map but with a flashier screen.

Some point before an excursion, you’ll need to find a location where you have either Internet data or Wi-Fi available. To start, open the Google Maps app and sign into your Google account. Next, type in the location you want an offline map for. Living out my dream trip to Ireland, I use Dublin as an example. 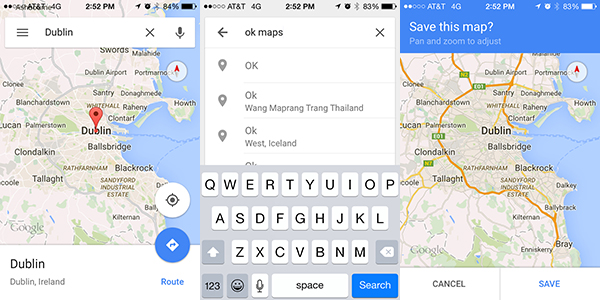 Zoom in or out to focus in on the area that you know you will need for offline access. Google Maps allows users to zoom in and out from saved maps and gives closer details of streets and buildings offline. So it’s generally more useful to zoom out when creating a new map: there’s more data to look at later since it saves more minute details than you think it would.

The OK Maps feature can only download areas as large as 50 km (31.7 miles) x 50 km (31.7 miles). If the area you are trying to save is too large, the app will alert you to zoom in to save. If you really need an entire area, my suggestion would be to create two maps (ex. Dublin East and Dublin West) and use those interchangeably if necessary.

Next, tap the search bar again, this time, typing in the magic phrase “OK Maps” or, according to Lifehacker, "Okay maps". Google Maps will ask you if you want to save the map. If the area looks good, tap “save.” The app will then ask users to name the map for reference later. All done.

Once the map is saved, it can be accessed again offline by opening the app and clicking on the menu button in the search bar. Depending on the type of mobile device you have, this may look like an icon in the shape of a person or three horizontal lines like in my example. This will take you to your Google Maps account where you can select “My Places.” Scroll down and voilà, your offline map is there for viewing.

Last July, Google announced they had created a new feature to make offline maps even more accessible for users. The feature functions the same way as OK Maps—i.e. you can’t get directions offline but you can look at previously saved maps—however there is a more direct way of saving maps that doesn’t require typing in the elusive “OK Maps” passcode. 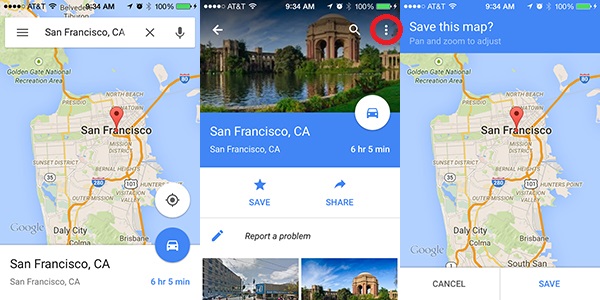 To use the alternative method, open up Google Maps and again search for your place. Here, I choose San Francisco. Next, pull up the information about the location you just searched. This can be done by clicking on the name of the location at the bottom of the map. The screen will then change to the information brief. On this window, touch the menu sign (looks like three circles stacked on top of each other) in the top right corner.

When the menu comes up, an option to “Save offline map” will appear. You will want to choose this and then zoom in to your select location. Just as with using OK Maps, these maps can be accessed from within “My Places” on the Google Maps app.

Keep in mind that Google Maps only saves offline maps for up to 30 days. After that, they are wiped off your app. If you need the maps for a longer period of time, you can update the map by going into “My Places,” then selecting “View all and manage.” Find the map you want to renew and click its corresponding menu sign (three stacked circles on the right). Now it is good for the next 30 days.

Although it may not provide the same directive advice Google Maps has taught me to rely on, the offline maps feature can definitely be a useful tool to help get around an unfamiliar location. Even if the excitement of feeling like the Sherlock Holmes of Google Maps wears off, I’m sure saving money by not purchasing an international data plan will still win me over.

Updated: November 16, 2015 Google confirmed that this feature is not available everywhere. Please let us know if there is a location that does not work; these are the confirmed locations that do not work: Bangkok, Buenos Aires, Barcelona, Chiang Mai, Japan, Penang, Qatar, Yangon and Yemen. 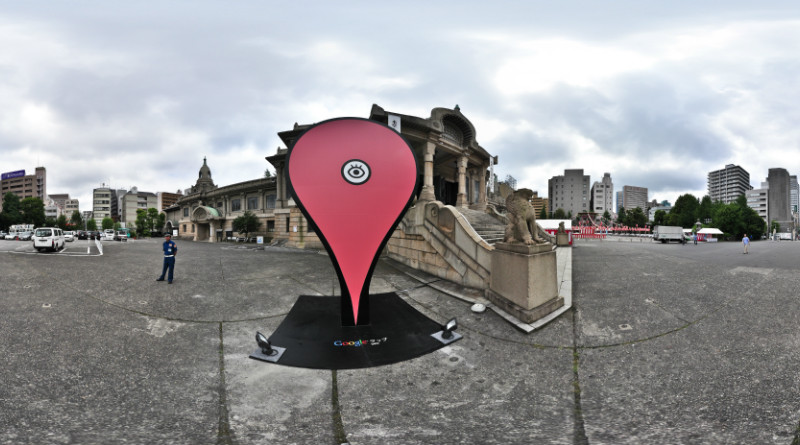 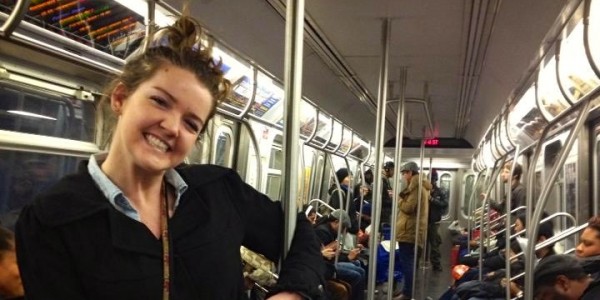