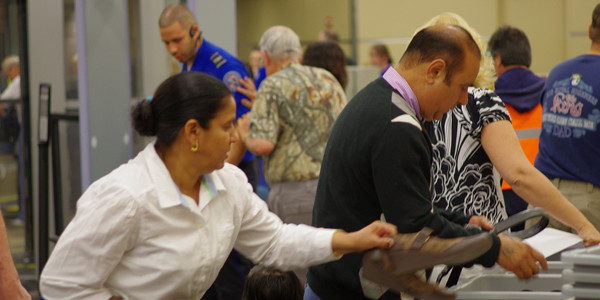 Fly enough, and you'll know. There's nothing worse than getting stuck in (security) traffic, and it pays to be efficient lest you miss your flight.

I don't like being judgmental, but it pays to be astute here. Do not get in the line with the family and the two screaming kids; do get in line behind the business travelers who look like they fly a lot (thanks, Up in the Air.) The shortest line doesn't mean its the best if security officers are spending 30 minutes on one person; look for the line likely to move the quickest.

The two objects that probably suck up the most time in the line are your laptop and any liquids you may have. You can save a lot of time here by packing your liquids properly in a clear quart bag and placing the plastic bag closest to the zipper or clasp of your carry on. Same thing with the laptop: put it in your purse or have it be the first object you see when you open your carry on. You should be able to grab both effortlessly and put them on the X-ray machine in one fell swoop.

The third thing to address is your clothes. No metal objects people! Including belts. Keep all the change out of your pockets. If it's cold where you're at, you'll most likely be asked to remove your scarf and jacket. If you're in America, be prepared to go the extra step and remove your shoes. You'll probably won't want to wear flats or sandals, either; a shoe that requires socks will probably be your best bet. Do you really want to run barefoot around the airport? I don't want to run barefoot around New York City and, trust me, neither do you.

Also, do yourself and others a favor. Once you're through, move all your trays and things to the furthest end of the machine to stand out of people's way to repack your stuff. It's just common sense, people. 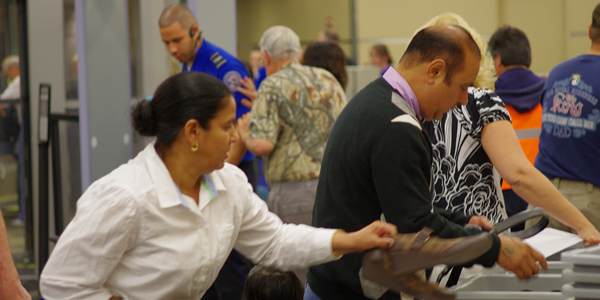