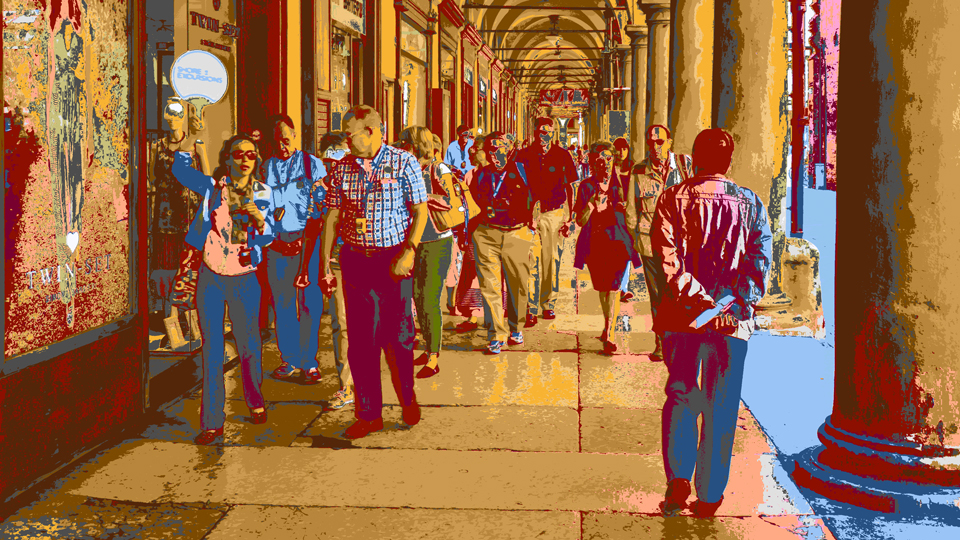 It's still not a great idea (or even possible) to travel far and wide these days. In real life, that is.

Remember what everyone was touting a year ago? Virtual tours have never looked so relevant. If you are game for an online adventure, the opportunities for delving into museum collections, perusing historic old towns, and touring iconic sites are getting only better by the moment.

Like a real tour, some of them are only available at select times. They also aren't all free, but they are definitely cheaper than jumping on a plane, and paying for accommodation.

Here's a handful of virtual tours that we found that puts you right where the action is.

The biggest plus? There's no leaving the couch.

You may have to figure out a way to get some Memphis barbecue (seriously though, Goldbelly has you covered) but a visit to the former digs of Elvis Aaron Presley is as easy as booking a ticket online.

Though these two-hour guided experiences include many of the same rooms of Graceland’s in-person tours, they also bring sections of the mansion that are roped off to real-life visitors. You'll have the chance to view artifacts like The King's sparkly jumpsuits and his pink Cadillac from entirely new angles, while spending a little time at the property's outdoor meditation garden.

The tour's interactive element even allows you to ask questions to a real tour guide (like, “What was Elvis really like?”).

There's nothing better than the ability to gawk and marvel at Graceland's lavishly over-the-top offerings from the privacy of your own home.

Tours only take place one a month and are for a limited time only. 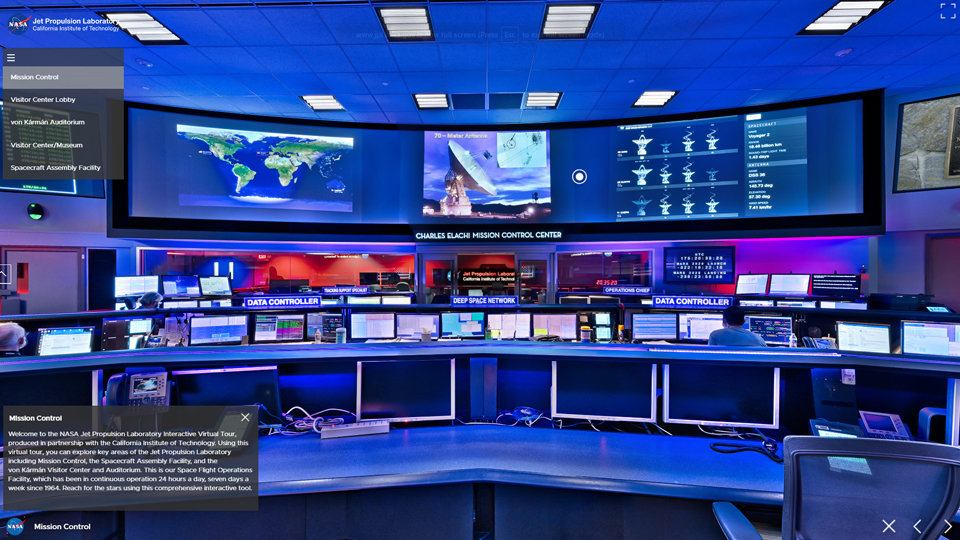 Fulfill all of those space fantasies. (NASA)

Real life tours may currently be on hold at NASA's 177-acre laboratory in Southern California but it is still possible to visit what's often referred to as the “center of the universe”—because it sends and receives data from across the solar system— while still wearing pajamas.

This self-guided virtual tour is available 24/7, and allows access to rooms like the Jet Propulsion Lab's (JPL's) Mission Control, Multi-Mission Support Area (where parts of a mission like landing on Mars are conducted), and the visitor center lobby.

There's also up-close views of artificial satellites such as Cassini, the first spacecraft to orbit around Saturn.

By hovering your mouse over different parts of the screen, you'll be able to learn about everything from asteroids to the SWOT (Surface Water and Ocean Topography) satellite, which is designed to make the first-ever global survey of earth's surface water. It is scheduled to launch in 2022.

Especially cool is the 360-degree views of the facility where JPL builds and tests the bulk of its robotic spacecraft, including the first successful missions to Jupiter and Uranus.

Simply scan a QR code with your mobile phone and start exploring. Start off in the museum's Great Hall which acts as a portal to galleries highlighting four themes: Power, Home, Nature, and Journey.

There are 46 interactive works in total, such as Vincent Van Gogh's Roses and Rembrandt's Self-Portrait. Some exhibits like the Seated Statue of Hatshepsut, a thousands-of-years-old sculpture depicting ancient Egypt's most accomplished female pharaoh, feature audio guides.

As you click to move, you'll even hear footsteps as though you're actually walking through the galleries. How's that for realism?

One cool feature: You can “borrow” artworks by taking quizzes. Answer a question correctly, and you'll then have 15 minutes to “hang” the artwork in your own place.

What skill did Rembrandt have in addition to painting? (Answer: draftsman).

Of course, it is then possible to "snap pics" of your new display to post on social media.

The MET Unframed is available 24/7.

A gem of southeastern Europe, Romania is home to the Carpathian mountains and stuffed cabbage leaves as sarmale. It's also got some amazing cities to explore.

Bucharest-based tour company Romanian Thrills is providing boutique virtual jaunts through some of the country's most popular spots. First up: medieval Brasov, which company owners Vlad and Georgiana call the “basecamp of any traveler willing to explore Transylvania.”

Tours run 45 minutes each, and include local insights and visits to some of each region's best-known landmarks.

For instance, “Mysteries of Medieval Brasov” features the Transylvanian Saxons, a population of Germans who settled in the area during the Middle Ages, as well as the secret mistress of Vlad the Impaler (a.k.a. The real Dracula).

Choose your own direction for the tour to take, pause if you like, even go back and revisit a site.

There are English subtitles—so no, you don't have to read or speak Romanian, though it may be fun to learn—to accompany the interactive voice recording that's doing the virtual guiding.

Though it’s not possible to actually join a tour, Intrepid Urban Adventures began back in 2009 and now hosts walking tours worldwide. Their Philly tours run the gamut from a stroll through the city's legendary beer scene to a delve into its historic and food-filled Italian Market.

More recently they've added a couple of virtual tours, including one through Philadelphia's Old City, a haven of Colonial history. It includes a visit to Elfreth Alley, the oldest continually residential street in the country, and the story of Betsy Ross, who crafted the first American flag.

To book one of these 60-minute virtual tours, simply select a date and time (they're typically offered twice daily), and voila!

For another great slice of Americana, their virtual Birthplace of America tour highlights sites like Independence Hall, where reps from the 13 American Colonies both drafted and signed the Declaration of Independence, and the Liberty Bell Center. It’s the birthplace of democracy. 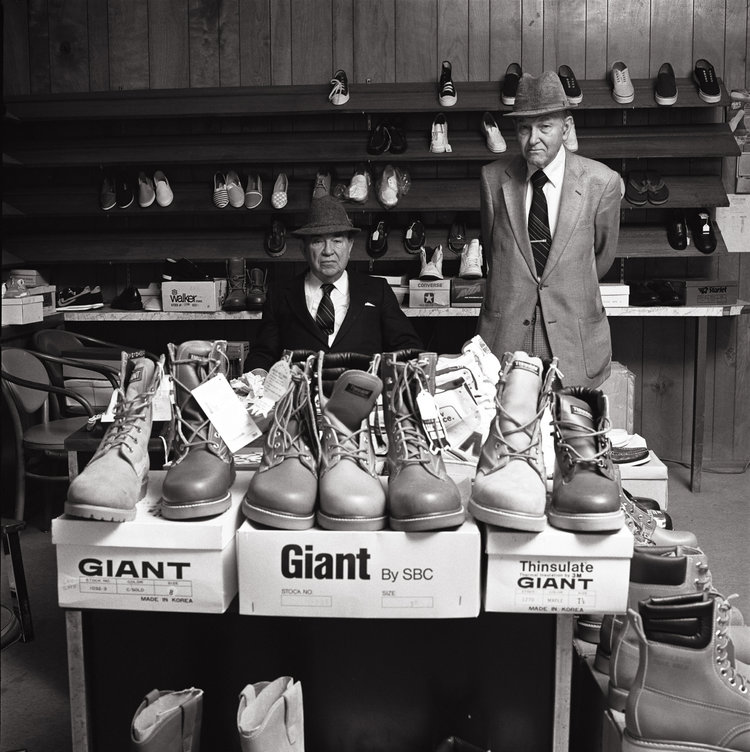 Into the heart of Old City. (Courtesy of James Wasserman)

Tours are available at select times. They're available on desktops or laptops, but not on mobile devices.

Like a real tour, some virtual tours are only available at select times. They also aren’t all free, but they are definitely cheaper than jumping on a plane. And you never leave the house!