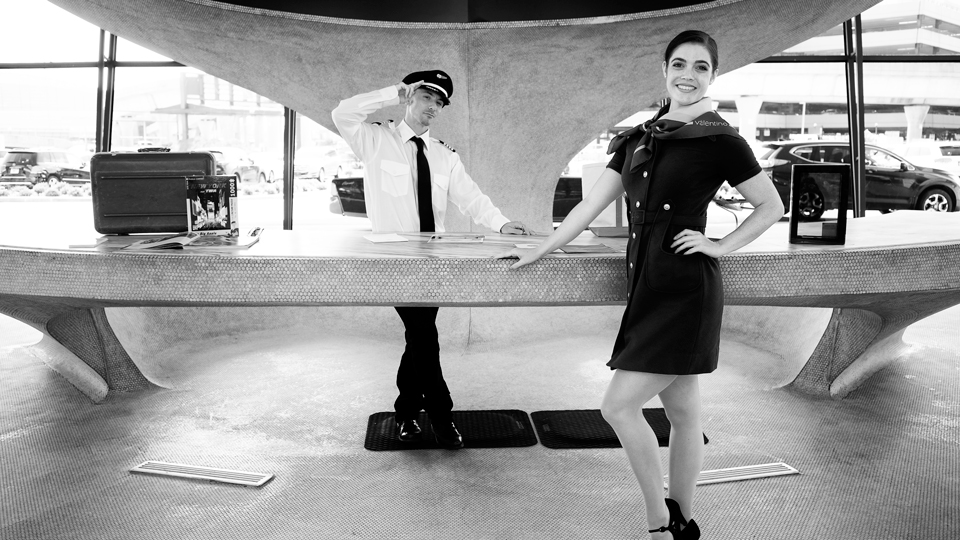 There was a time when sleek jetliners were filled with well-dressed, martini-sipping passengers ruled the sky.

However, I think we can all agree: Airplane seats that are practically on top of one another, meals that cost extra, and checked-in luggage fees that used to be free, flying hasn’t been glamorous for a while.

Though the 1950 and 1960s were known as the "Golden Age" of flying, it is more commonly known as the Jet Age in aviation history.

It began with the introduction of jet planes in 1958 lasting into the modern era, initiated by the transition from propeller-driven commercial planes to large, more high-flying (literally) aircrafts. Many of them also had the pressurized cabins that we all now know and love, which meant they could fly safer at higher altitudes.

As commercial planes became easier to manufacture (and companies like Boeing increased their skillset, starting with the production of military planes during WWII), they got bigger. They also flew faster.

The larger the aircrafts got, the more accessible the seats becane. This made air travel a possible option for middle class travelers, though it was still quite posh.1 Suddenly, a family of four from Ohio could book that trip to California they’d always dreamed about without spending three days on the train.

In fact, before President Jimmy Carter deregulated the airlines in 1978,2 traveling the skies was considered both a thing of novelty and thrill.

The Jet Age was all about style 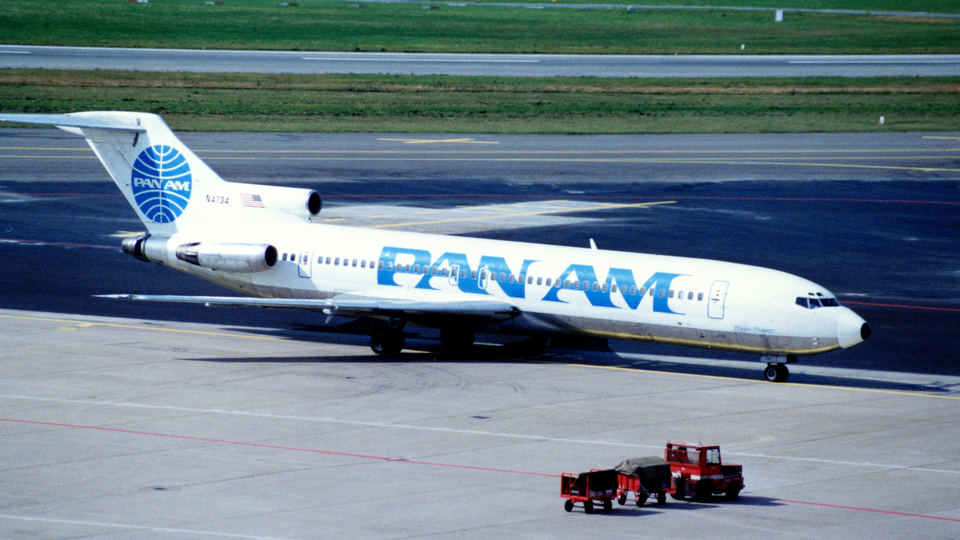 They flew the newest and sleekest planes: Aircrafts like the Boeing 707 were fast and widespread, behemoth vehicles moving across the sky.

Later came the Boeing 747, the world’s first “Jumbo Jet.” It was massive, spacious, and a Pan Am favorite.

Once onboard, the airlines treated passengers—already dressed to the nines in their swankiest suits and slim sheath dresses with matching shell-shaped caps, the aspirations every travel influencer actually aspires to live—like royalty. We’re talking real china dinnerware, free-flowing booze, and roomy seats.

For instance, Pan Am's Boeing 747 had a first-class dining room on the plane's upper deck. Here, passengers sat down to six-course meals that consisted of dishes like caviar and lobster thermidor (lobster meat cooked in wine before being stuffed back into the lobster shell). 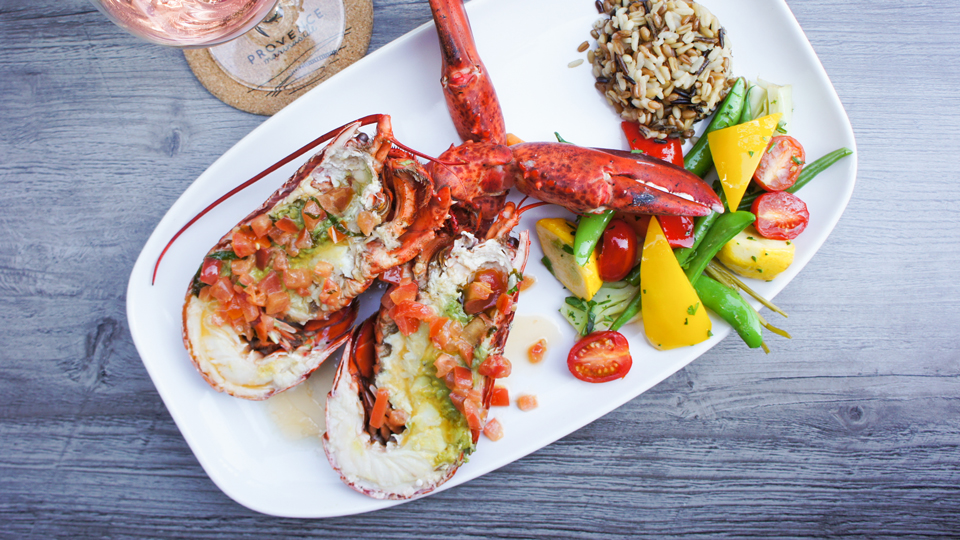 Of course, there was also ample imbibing.

Some planes, like the short-lived Boeing Stratocruisers—a Pan Am favorite—and the Lockheed Constellations popular with TWA had sleeping berths that could fold down for long-haul travel. It was sort of akin to sleeping on a train through Europe, but onboard a plane.

Flight attendants (then called stewardesses) dressed as though they were hitting the runway at New York Fashion Week.

Even Hollywood got in on outfitting them, so much so that the Academy Award-winning chief designer of Paramount studios, Edith Head, came up with the wool gabardine shirtwaist dresses (think leather belt, Chanel-inspired jackets, and three-inch stiletto heels) that Delta flight attendants once wore.

Stewardesses typically handed out postcards to passengers to occupy them during long flights. That is, if the passengers weren’t already too busy drinking, eating, and socializing.

There were some cons, too

How often do you think about hijackings these days? Back then, the possibility was pretty prevalent. Especially since modern airport security—metal detectors for passengers, X-ray inspections for bags—didn’t arrive until the 1970s.

This was also a time when people could smoke on planes. At their seat. In the lavatories. Cigars, cigarettes... it didn’t matter what they smoked, and depending on how you feel about smoking, it was gross.

There were also fewer flights to choose from.

Air sickness bags were a regular backseat feature to help quell uneasy stomachs. This was because turbulence was on par for the course in previous decades, when planes flew at a lower attitudes. With pressurized cabins still making the rounds and not quite standard yet, increased turbulence remained an increased possibility.

Then there was the cost of a seat on a flight. Though air travel was becoming more mainstream, they remained relatively upscale, even if they were becoming more affordable. A flight from NYC to Los Angeles in ‘travel’ (aka coach) class might set you back the equivalent of $1,500 today.

Though you might not be wearing your Sunday best for an air jaunt from Boston to London these days, unless c’est la travel influencer, flights are undoubtedly cheaper.

Still, nostalgia for the Jet Age of air travel remains alive and well. 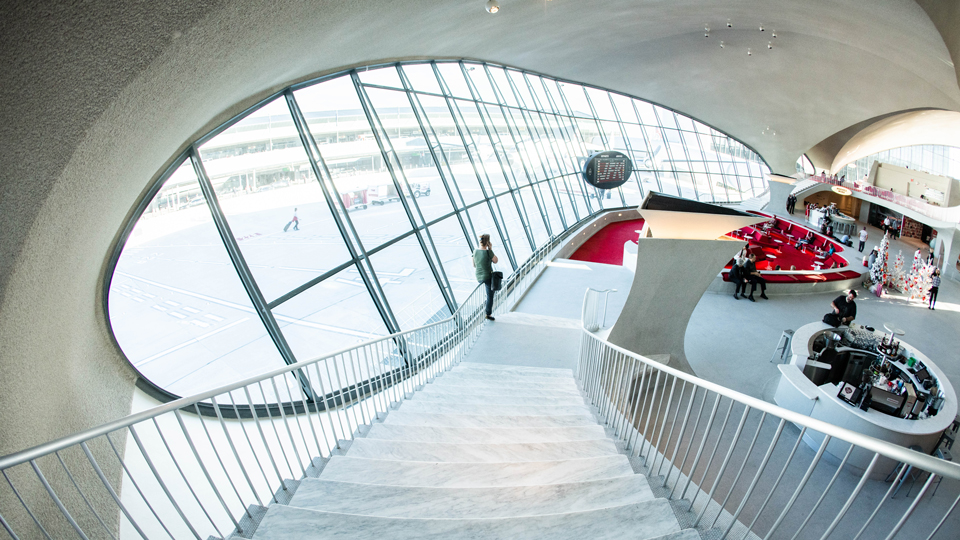 There’s the famed rooftop infinity pool, where you can watch planes glide in as they come in on the tarmac. The property even features a retired 1958 Lockheed Constellation airplane, completely renovated and transformed into a sumptuous cocktail lounge.

If you’re passing through Los Angeles International Airport, chances are you’ll catch sight of the Theme Building. It stands like a central outdoor hub between terminals, and looks like a flying saucer on stilts.

Then-Vice President Lyndon B. Johnson, dedicated the structure in June 1961. While its Encounter restaurant closed permanently in 2013, the building itself still operates as a public observation deck on weekends.

Air Hollywood puts on the Pan Am Experience, a series of monthly dinner parties (currently on hold) in Los Angeles, Calif. They take place inside a Boeing 747 replica that’s outfitted like a vintage Pan Am plane, complete with souvenir prop cigarettes, luggage tags, and postcards, complete with the vintage price tag to match.

Multi-course meals run the gamut from five-course, 20-person seatings in ‘business class’ with open bar and entertainment ($475/per pair) to six-course ‘Upper Deck Lounge’ affairs complete with caviar, swivel chairs, and a limit of 14 guests ($875/per pair).

Air travel may never be perfect, but thankfully there are ways to relive some of it in its full glory without ever need to set foot on a plane.

There's never been a better time to look back at the past.