How has each leader of the free world approached the hazards of jet lag? Each personal technique seems just as different as how they liked their eggs for breakfast. Perhaps it only proves what no one wants to hear: there is no guaranteed, tried-and-true method for beating the beast.

Dwight D. Eisenhower: Eisenhower’s method for avoiding jet lag was always to arrive a few days early at his destination to give himself a couple of days to readjust to his new schedule. For a while, though, it would seem that former ConocoPhillips execs were also forced to use a modified Eisenhower approach. Studies, however, have shown that this does work but the rule of thumb is that you need about one day per time zone change. You would have to arrive about ten days prior for a time zone change shift of approximately ten hours.

Richard Nixon: Nixon had an interesting method for breaking up the jet lag, often stopping in a third country for a day or two to give his body some time to adjust. On his historic visit to China—known for its implications in Sino-American relations—Nixon stopped overnight in Hawaii and Guam en route to Beijing. John F. Osborne, a former columnist for the The New Republic that covered the event, observes that:

It was a poor time in the sense that we were weary, dulled by 13 hours in the air on the trip from Honolulu with brief stops at Guam and Shanghai. The doctors and advance men who counseled Mr. Nixon to break his journey across the international dateline with two nights in Honolulu and another in Guam were wise.

According to Richard M. Nixon: A Life in Full, on a trip to the Middle East in the summer of 1974, he stopped by Salzburg, Austria on his way to Cairo to rest before another important diplomatic meeting.

Ronald Reagan: The former actor was probably the biggest proponent of the Argonne Anti-Jet-Lag diet, which involved modifying the traveler’s eating patterns for about four days. This required the person to alternate “feasting” and “fasting” days for maximum efficiency on the ground. In 2002, a study conducted in Military Medicine journal found that 9% of soldiers who followed it experienced jet lag after deployment versus the 44% of other soldiers who had not followed the diet.

Lyndon Johnson: Now here was a man who didn’t even try to beat the system. Johnson’s method was to effectively ignore jet lag and to virtually ignore any attempts at adjusting to his new time zone. He remained on his body’s natural schedule—and home country’s—and tried to rearrange appointments when he was awake. This was basically the tactic he employed when he met with South Vietnamese heads of state in Guam during the Vietnam War. Others were forced to work around his schedule but hey, we all can’t be the President of the United States. 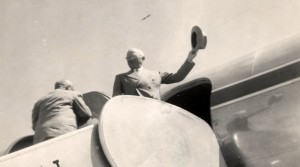 George W. Bush: I am still unclear if he ever left his ranch in Texas.

Barack Obama: Though it’s unclear as to what strategy Obama exactly employs to combat jet lag, a strange notation appeared back in 2010 on his medical records that he was taking a “physician-prescribed” drug for jet lag management though it’s not exactly clear what he was taking. Media pundits presume that Obama was taking Provigil or Nuvigil, stimulants prescribed to help off excessive sleepiness, which would have been (more) effective for time zone management.

But what about all of those Secretaries of State?

The ones whose job where it is to fly around the rest of the world and conduct U.S. foreign affairs? I think it’s only fair that we give some of these people a nod too.

Henry Kissinger: Former Secretary of State Henry Kissinger’s approach was to systematically shift his body’s internal clock by going to bed one hour earlier each day and then to get up one hour earlier each day. This was his preferred method of dealing with the problem, especially when he had important meetings to deal with. Unfortunately, this method isn’t always feasible for dealing with your own life at home especially if you’ve got, well, a life.

Hillary Clinton: “Hillary Clinton doesn’t even have time for jet lag,” the saying goes. Clinton broke the record for visiting more countries than any other former U.S. secretary of state, including esteemed figures such as Madeline Albright and Henry Kissinger. In the first three years, she logged more than 102 countries over 351 days of travel and 843,839 miles. Her final tally? 112 countries Four months after she resigned from her position, she quipped she was still jet lagged.

John Kerry: “I can’t say my past experiments with jet lag remedies have been very scientific. When I’m flying, I usually take an Ambien and listen to one of my own speeches on my iPod. I’m out in seconds. But it doesn’t always work and sometimes you’ll have some funny moments from being overtired. There was an incident in New Orleans, at Mardi Gras, in 1997. But the video has been destroyed and I gave the beads back.”