Map Happy » Travel » The Point It Book Communicates (Almost) Everything

The Point It book is an absolutely indispensable tool, especially if you happen to have the artistic and linguistic skills of a squirrel. Who said you needed to know Turkish?

The book is essentially a picture dictionary for all the things you would ever need on the road. People always tend to get really hung up on the communication part of traveling, but what they fail to understand is that all you have to do is regress back to the communication skills of a two-year-old. Which, if you remember accurately, revolved around pointing to the stuffed animal that you wanted.

Before I bought the book, I had a pretty similar if not rudimentary system in place for dishes that I wanted to eat, but couldn’t pronounce. I can’t tell you how often I pointed to a picture of chowfun noodles on my phone in Hong Kong, with my gut busting in thanks. But the more I travel to regions I’ve never been before, the more I realize how lazy I’ve just gotten about miming some things.

Because the Germans are so wonderfully German, we also have to them to thank for publishing something rather ingenious. My edition of the Point It book, which has been revised 17 times for the 2013 iteration, features about 71 full pages of pictures. It’s also compact and superlight, measuring at 3.7 inches (9.4 cm) x 4.9 inches (12.4 cm) and weighing in at 2.1 ounces. Best thing ever, it’s the easiest thing you could stuff in a purse or bag without realizing it’s ever there.

The book covers a pretty wide array of travel topics that include food, hotel, transport, shopping, sport, and help. While it’s not guaranteed that it’s bound to include less important items, it will for the most part pretty much cover everything else. (I tried to communicate “pumpkin” once to an elderly Turkish grandmother with the book. I ended up drawing a rather poor-looking pumpkin.)

In particular, it was nice to see that the book has ways to denote one-star to five-star establishments, non-smoking or smoking, types of beds, modes of transport and health conditions. The most useful pictures however may be the emergency scenarios: there’s even a way to portray clogged toilets or automotive problems!

There’s also several pages devoted to world and regional maps for more specific geographical information. Just about the only region that it doesn’t cover is Antarctica. While less adventurous travelers won’t even notice this omission, I felt like this was a relatively easy fix to cover all of their bases in one fell swoop. 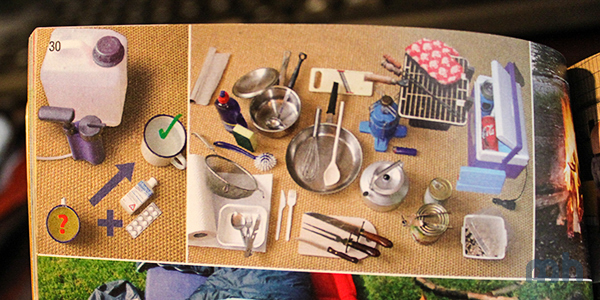 A quick glance inside the book.

Unfortunately, despite all of the publisher’s efforts, most of the actual pictures are pretty small, which was done to keep the book compact. Amazon reviewer SS also makes a fantastic point that we never thought about: sometimes you might want to point to something to indicate that you don’t want it, and in this case it would be especially helpful to carry around a printout of a green check mark or big red x.

The unused 72nd page is a rather nice touch and provides translations for a few common phrases in three languages (English, French and German) and space for you to write two other additional translations. I personally think they could have gone at least with one Eastern language here. But given with what you get, I would opt to fill in some of the empty spaces with some of the missing UNESCO languages.

(The official languages of UNESCO are Arabic, Chinese, English, French, Russian and Spanish. This is actually pretty representative of the languages mostly widely spoken around the world, which is why we try to cover them in our language primers.)

Here’s the thing. It’s pretty easy to get by for the most part if you speak the language of the world (English) but for the random moments that you happen to be stuck in a small town or remote part of the world, it’s a great book to get you out of a situation in a pinch. Once you wander out of a tourist zone, there will be less people around who are able to converse in a different language.

There’s also an Android and iOS app for those who are more electronically inclined. It covers pretty much the same topics as the book, but with the added bonus of having a dedicated table of contents and index that make it much quicker to navigate to the page that you need. About the only downside with all technology in general is that if you run out of juice, you’re shit out of luck.