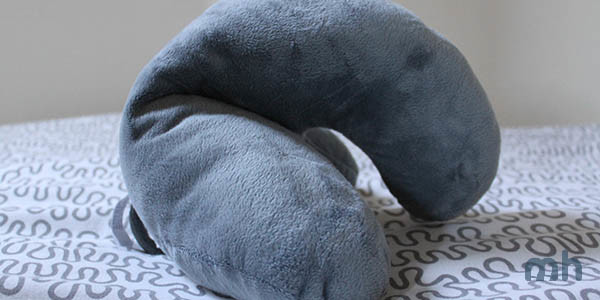 I have a confession to make. I hate neck pillows. So when Karina asked me if I wanted to take the J-Pillow review, a part of me died inside. In the name of traveling…?

Not only was I being forced to use a neck pillow for the first time in years, someone had thrown me a neck pillow that looked like a torture contraption straight out of the medieval period. (I have been watching a lot of CW shows as of late.) But looks are deceiving: the J-Pillow might be the comfiest neck pillow I’ve encountered yet if it wasn’t for the fact that’s it’s not exactly the most portable pillow I’ve seen on the market. The latter is an understatement.

But the J-Pillow doesn’t purport to be any neck pillow; it aims to be the travel pillow. Originally developed by Virgin Atlantic flight attendant Gemma Jansen, it promptly won a shitload of awards, including the 2012/2013 British Invention of the year due to its unique design. No offense to anyone, though, my minimalist packing sensibilities are just too offended to actually consider shelling out the $29.95 on Amazon.

It certainly doesn’t look like any traditional neck pillow: it’s not square and it’s certainly not U-shaped. Instead, it has three prongs, one to support the back of your head, one for the side of your head, and one to support your neck and chin for full head and neck support. The best way to describe this thing is that it’s an alien pillow on steroids. SmarterTravel even thought it looked "vaguely phallic." 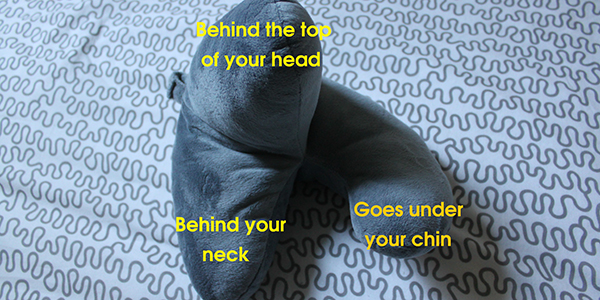 Yeah, you actually need instructions for this thing.

The pillow is made out of plush polyester with a polyester fiber filling, which basically means it’s soft. And I mean soft. So while it doesn’t come with a pillow cover, the whole thing is machine washable so that’s a plus. It measures at 9.3 inches x 2.4 inches x 8.4 inches (23.6 cm x 6.1 cm x 21.3 cm), which actually isn’t a trifle object to be carrying around. It’s still fairly light for its size at 7.5 ounces (212 g), though.

Rather begrudgingly, I coerced it in my carry-on bag on the way home from New York. The first test was on a JFK to SFO flight where I ended up pulling it out (rather ashamed, I might add) next to a United flight attendant I was sitting next to. Then I tried to put it on correctly, using it as a prop against the window, where I was sitting.

I didn’t fall asleep. Not because I wanted to drool without remorse but I needed to get some work done so I actually couldn’t afford to fall asleep. But I did sneak in some movie time and happily used the pillow as a cushion against to rest my head. (I usually put the airline pillow behind me for back support.) I don’t much trouble falling asleep in planes if I have my eye mask with me so I wasn’t terribly worried about not being able to fall asleep with the J-Pillow. Most Amazon reviewers have reported very little issue about not being able to sleep while using it.

Since then, the J-Pillow has found its way next to my bed pillows, where I, uh, slip it on time to time while I watch some TV when I’m not working. I often fall asleep due to the fact that the pillow is doing its job well and the actors of Revenge clearly aren't. I rather like the fact its three-pronged approach allows for you to cradle your head in a variety of positions besides the recommended method. There’s no denying that the J-Pillow is extremely comfortable, to the point where I’m using it to prop my head up while I write this piece. 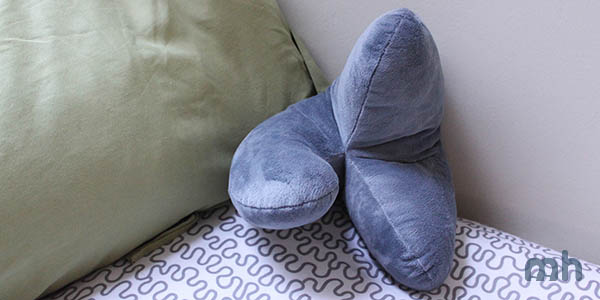 Sometimes when I feel lazy...

However, there have been reports that the J-Pillow doesn’t fit everyone well. Though it purports to be a one-size-fits-all device, a few people have noted that if you have a large neck, the J-Pillow may not fit. One commenter even complained that the J-Pillow seems to have been designed for an average woman and may not work so well for a large man. Though I didn’t seem to have any issue—I’m a tiny female, after all—it might be worth something considering if you fall into the latter category.

The J-Pillow’s main detriment is that it’s really bulky and likes to retain its shape though it can be smushed around if need be. To be fair, I was so appalled by its initial footprint that I even briefly considered leaving it behind on the plane, despite the manufacturer’s claim about being easy to carry. Space is valuable to me and I don’t have time to worry about smushing it into my carry-on bag or looking like a space cadet around the airport. The less shit I have to deal with, the better. The pillow does come with a clasp, though, so you can attach it to a luggage handle or a backpack strap in the absolute worst case scenario. Still, it doesn't seem hygienic.

There’s no denying the J-Pillow is a great overall pillow but it is really not built for minimalist packers in mind. To me, the greatest sin of all is taking up lots of space. In fact, after further digging around, I eventually found out there’s an inflatable version available for £24.95 ($47.87) with free shipping direct from the manufacturer, which would solve the problem. But unless they drop the price down to sub-$30 for the U.S. market, that's pretty extortionate.

That said, I might be convinced to bring the J-Pillow if I have to endure a domestic red-eye flight because that shit is just horrendous. 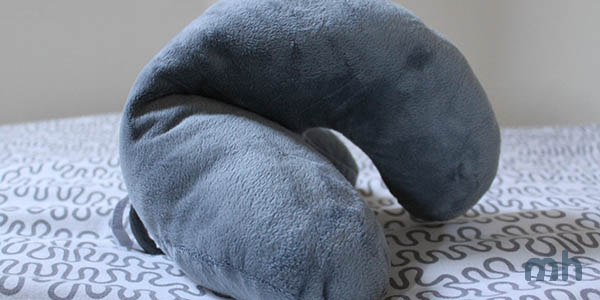