Sometimes two flights can cost less than one. There are instances when splitting up itineraries and combining different airlines can result in a cheaper overall fare. Get ready to make your own layover.

This trick is especially beneficial for booking one-way flights. I mean, how desperate are you to save a buck? For example, instead of flying Sydney to Philadelphia on a one-way (which would require a layover anyways!) it can be a lot cheaper to make that layover yourself. Often the real trick is really about finding the right hub, which should be an airline’s major base of operations.

The only thing to really note is that, unlike traditional layovers, these aren’t protected. Generally, airlines are required to take care of passengers that don’t make their connecting flight. In the case of making a faux layover, most people are really on their own, so budgeting a lot of time in case there’s a significant delay on the first flight is a wise move.

When (and why) it works

This trick works best when flying long-haul from non-hub cities to popular destinations with major home airlines. Flying from a city that doesn’t routinely run routes to a far-off destination assures I’ll first be routed to another city in the U.S. that does.

From the hub city, I’ll have my pick of different airlines that could run routes at far lower fares than what I’d find in my local city. And to get to that hub city, I can usually rely on at least one low-cost carrier to have a direct flight for less.

It bears repeating that the savings are usually best when the trip is one-way. Roundtrip flights just take a little bit more digging, and the itineraries get complicated quickly. But if you’re in it to save money (like me!), then it’s worth all the effort.

Here’s a telling example on a one-way flight.

Say I’m booking a last-minute, one-way flight from Philadelphia to Sydney departing May 13th, 20161. The lowest available fare is $1,028 on an American Airlines flight that has a layover at LAX.

But what happens if I were to book one flight from Philadelphia to LAX, then book a separate flight from LAX to Sydney? I’d be making the same trip but manually inserting a layover. 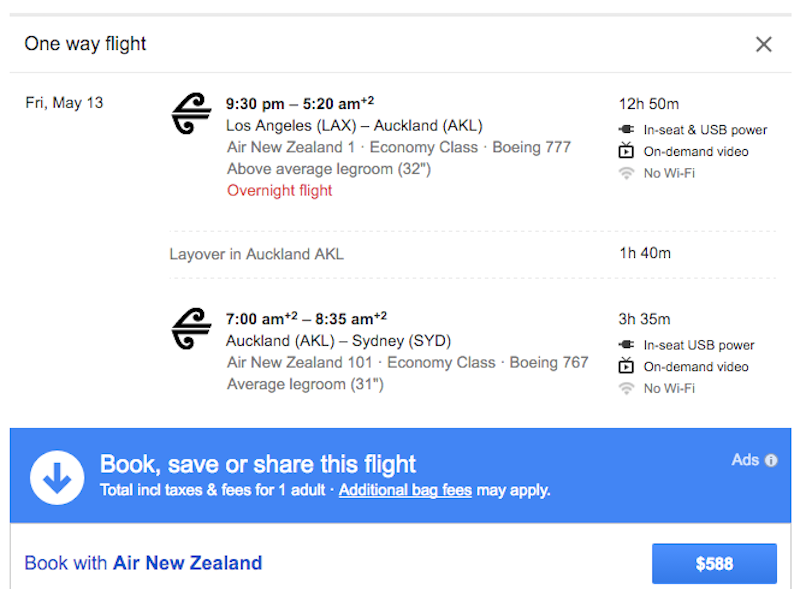 The first flight arrives at LAX at 3:30 pm and the flight to Sydney doesn’t leave until 9:30pm. So I have plenty of extra time in case of delays.

Splitting up a single-carrier flight into multiple legs gives customers more opportunities to take advantage of different airlines and different airports. In this case, Air New Zealand offers a good last-minute rate to Sydney that wouldn’t have been available to me flying from Philly. But originating from LAX afforded me that opportunity.

Example #2: Dallas, Tx. to Tokyo, Japan and back again

This time it’s with a round-trip itinerary. (It’s about to get complicated.)

Pretend I live in Dallas and I want to spend a few nights in Tokyo in August. I could fly on United and make a two-hour stopover in Chicago for $1,491 roundtrip.

Sure, I’d be flying on four different airlines – but I’d only pay a total of $1,319 for a similar itinerary. The risk, of course, is that the more stops and airlines I add, the more likely I am to miss a flight. But I’d save $172.

Example #3: Las Vegas, Nv. to Anchorage, Ak. and back again

Now I live in Vegas and I want to escape the summer heat. So I plan a trip to Anchorage in June. (Talk about extremes!) I could catch a flight on Delta for $370 that has a layover in Seattle.

But I could fly from Vegas to Seattle on Spirit, and Seattle to Anchorage on Delta. The return flight to Seattle would be on JetBlue, then on Spirit back to Vegas. All for $332.

In this third case, the savings aren’t amazing and the extra flight time might make some flyers’ heads spin. But it’s all in the name of saving a few bucks. Spend that extra cash on some kitschy Alaskan souvenirs.