The best way to get the cheapest flight is to search for alternate days and alternate airports, right? Wrong.

Well, it’s not a terrible strategy if you don’t want to spend a lot of time booking a flight; it is certainly the least hassle. And even part of me believes that all that extra time searching for just a couple of dollars in savings is honestly not a great way to go sometimes. But when I’m at the end of my rope and prices are already butt-ridiculous, I pull out every single trick I know in the book. When you gotta get there, you gotta get there.

(Be aware that if you’re planning on using award miles, this often adds another layer of complexity. Other considerations include whether it’s actually worth it to pay instead, using combinations of different airline programs, using a combination of paid/free one-ways, or a combo of all three.)

Set aside a good chunk of time.

The first thing you should be aware is to set aside an hour. Or at least 30 minutes for some pretty intense concentration. Looking for a cheap flight—or ways to cut money—requires time. Time is money.

This might even sound a little strange to suggest but I would suggest having a pad of paper and pen to keep by the computer while cycling through different flight searches. You’ll be sorting through lots of options so it’s good to keep a written record of flight numbers, dates and prices to find the best deal at the very end. (I also screenshot all the viable flight options but this isn’t the easiest way to keep track when piecing together one-way flights).

Establish the baseline price that you’re trying to beat. Use good search engines. In most cases, I recommend users to book normally if prices aren’t ridiculous and the situation isn’t dire. (Your snorkeling trip to Aruba is not dire, trust me.) This includes searching for the normal criteria first, such as flexible airports and flexible dates.

It’s easy to default to the most convenient airport but if the flight involves a smaller, regional airport you can betcha your guns it’s going to require at least one connection. A flight itinerary consisting of two small airports can and often require two connections. Instead, consider driving out to the big airport like Los Angeles instead of Orange County to save money. I like to make sure there’s at least one major airport on the itinerary, whether that’s the destination or arrival.

Reason being is because big cities and hubs, such as LAX, SFO, DFW, ORD, EWR, often have many more routes going to another hub or a decently-sized city like Philadelphia versus a much smaller town, like Allentown, Pa. Bigger airports mean more routes, which means more competition and cheaper flights. It might be worth it to consider LAX-PHL instead of SNA-ABE for a trip from Newport Beach, Ca. to Allentown, Pa.

Think in one-ways and hidden-city ticketing.

Hidden-city ticketing is essentially when you really want to get to, say, Philadelphia but buying a flight that goes to New York and leaving the airport at a Philadelphia connection is a lot cheaper. There are tons of things you have to be aware of when you do hidden-city ticketing but I only keep this trick on the back burner until things get majorly desperate. It has to be a life or death situation in order for me to bend the rules quite flagrantly like this.

Just be aware that hidden-city ticketing can constitute as a violation of an airline’s Contract of Carriage but there have been cases where it’s been reportedly ok’ed by the airline. You’ll have to carry on everything and book a one-way because the rest of the itinerary will be canceled otherwise.

It’s possible to do it for the inbound or outbound flight and/or to search both for the most options. Of course, there’s also the case of the other flight, whether that ends up being a normal one-way or another hidden-city ticket. Your choice: I wasn’t kidding when I said this stuff was going to get hardcore.

It’s easy to look for open-jaw tickets but not many people do it because they don’t know how to. Most people know to at least look for alternate airports. But sometimes an open-jaw can yield cheaper ticket prices than a normal roundtrip and what we’re looking for here is an open-jaw flight between nearby airports.

The absolute quickest way to search for both open-jaws and roundtrips between nearby airports on surrounding dates simultaneously—this is about being flexible to the nth degree—is to use Google ITA Matrix. Unfortunately, Kayak, Hipmunk and Skyscanner just aren’t as powerful as Google ITA Matrix to pull off this type of search. 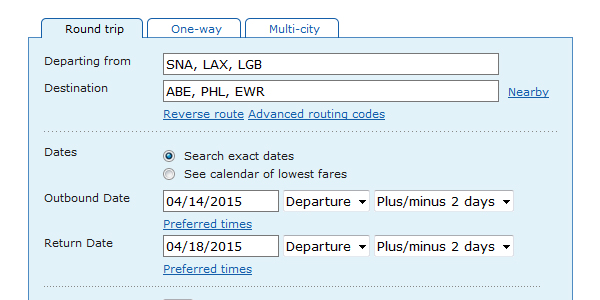 In the departure list, I list any airport I would be willing to fly out: in this case, Santa Ana, Los Angeles and Long Beach airports make the cut. Then I’d list any airport I’d be willing to arrive at, including Allentown, Philadelphia and Newark airport (there is a long bus that goes from Newark to Allentown, my final destination). Do it like so.

To be ultra-flexible for the cheapest price, I’m willing to fly within two days of either side of each date. The results will return both open-jaws and round-trip tickets in the cheapest order (airports will be highlighted in red if it is an open-jaw trip). 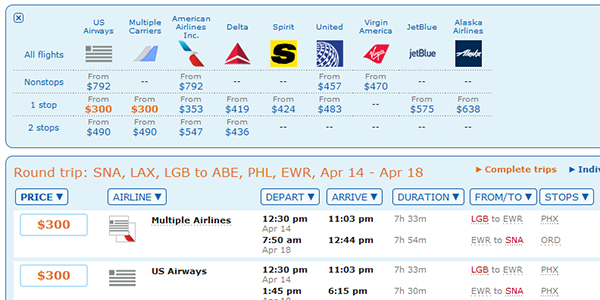 In this case, the cheapest nonstop flight is an open-jaw for $457 followed by a round-trip for $470, making an open-jaw the cheapest option. The biggest overall rock bottom price is an open-jaw flight that leaves from Long Beach and returns to Santa Ana for $300. Comparatively, the cheapest round-trip flight is $357. So savings stand around $57 for those willing to put up with some minimal hassle. You will have to evaluate if that savings will negate any possible added transportation time and costs to an alternate airport, though.

It’s worth noting that Google ITA Matrix does not help users book tickets. I often head straight directly to the main airline website to find the fare, plug those exact flight conditions into Kayak’s multiple destination search or turn to Hipmunk to book the specific fare I’m looking for.

I would probably be the last person in the world to suggest Priceline bidding but I actually am. Recently, a couple family members were looking for last-minute flights to Pennsylvania. Round-trip tickets with flexible times and airports were regularly clocking in at $700+. And though I had pulled every tool I knew in my arsenal above, the cheapest price I could find was $580, had two connections and required an arrival airport at least an hour away.

My uncle eventually bid on Priceline (to what I was thinking, okkk) in a last-ditch attempt and managed to score a ticket for $552.65. So while though that doesn’t seem like a ton of savings, it required one less connection and had the preferred destination airport. In fact, Priceline flight bids state that ticketed bids will have their flights will fall under these conditions:

Connection times for domestic travel can be up to 3 hours, depending on the best available routing. 80% of domestic connections booked by Priceline are 2 hours or less.