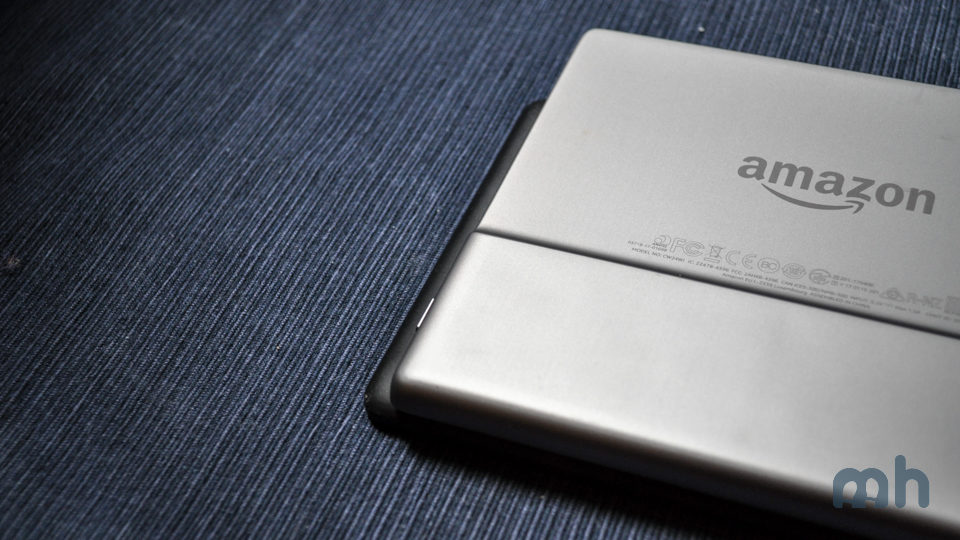 There’s no doubt about it: The Kindle is a godsend on the road. Nothing beats full access to a bookshelf when there’s no Wi-Fi around.

But with so many versions of the Kindle to pick and choose from, is the Kindle Oasis really the best model for traveling? It can be worth it to upgrade, but it depends on what you’re looking for, and obviously, your lifestyle. If you’re a surfer, maybe. If you already own a functioning Kindle, probably not.

The Kindle Oasis is expensive at $250, and is more than double the price—212.5% to be exact—of the cheapest Kindle available. It is also 108% more expensive than the Kindle Paperwhite, which is priced at $120. This is not a cheap Kindle by any means.

(To be perfectly clear, the difference between the cheapest Kindle and the Kindle Paperwhite is $40. It is 100% absolutely worth it to spend the extra $40 to get the backlight on the Paperwhite. It is life-changing.)

The Kindle Oasis has a couple of things that make it different from all the other versions, but its most appealing "travel" feature is that it can withstand a quick dunk in the water and rugged environments. Naturally, we’re going to put this to the test, because I freaking love my sea salt baths and going to the beach, so let’s figure out whether it’s time for an upgrade. 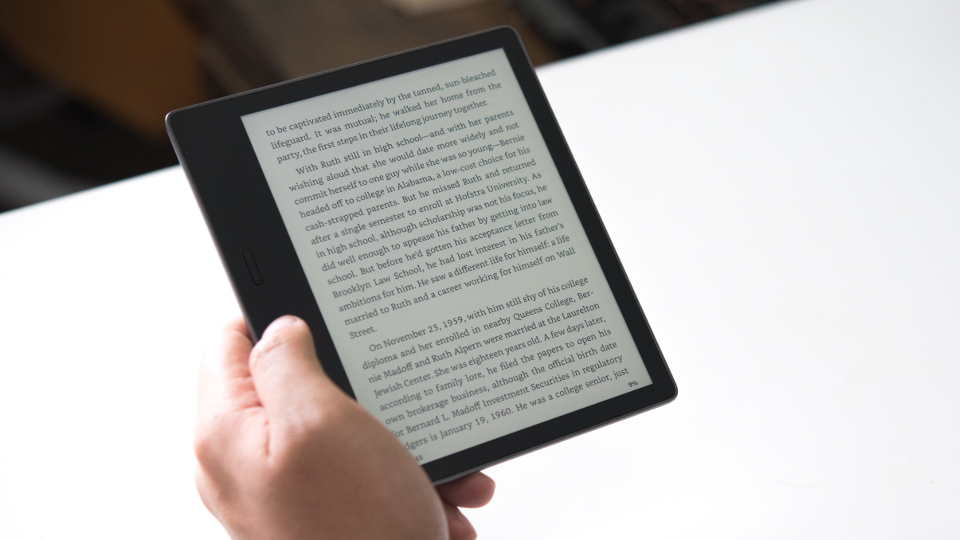 But first, let's talk about the trade-in program.

This is kind of a big deal, especially for previous Kindle owners, because it could potentially tip the scales on whether it makes sense to buy or upgrade.

For a limited time, Amazon is offering previous Kindle owners an Amazon gift card (equivalent to the value of the old Kindle) and a 25% discount off their next Kindle for trading in their old device. This can be completed online or in-store at Amazon Books.

Kindle owners must start the process by June 30, 2018—that's one month left, folks—and the devices must be sent in 7 days from the submission date. The 25% discount doesn't expire until August 31, 2018. Depending on what version you plan to purchase next, savings can range from $20 to $63 out of the starting gate. (Plus, the gift card.)

Here are the new prices with the discount:

For those that own a Paperwhite, trading it in brings the price of a Kindle Oasis just a hair more expensive than the cost of purchasing a new Paperwhite. I mean, you'll still have to splurge an extra $68 (or just an extra third) on top of that, but think of that gift card. Think about it, real hard.

Briefly, an overview of the Kindle Oasis and other Kindles.

Before we get deep into what's included for $250 (not a lot), let's briefly cover the main differences between the different Kindle versions. Each version builds on previous models, so technically, the Oasis has all of them:

Next, let’s debunk a few things. This is what is included for the $250 Kindle Oasis box: the device and a microUSB cord. There is no wall outlet charger or leather cover included. I had really thought it included an uber special leather cover that also charges at the same time, which was included in the first edition of the Oasis. (Turns out that was due to the battery usage, but we still think its needed to protect it from nicks and things.)

I can only conclude that Amazon thinks we should pay a fortune for the ability to read.

For the record, the Kindle Oasis is not the lightest Kindle on the market. That distinction lies with the Kindle Voyage, at 6.3 ounces.

The Kindle Oasis does include Audible support and Bluetooth connectivity, which none of the other Kindles have. Listening to audio requires that the reader own Bluetooth-enabled headphones, like the Google Pixel Buds, or another Bluetooth audio-producing device. However, I am not a douche, so I do not own such a pair. 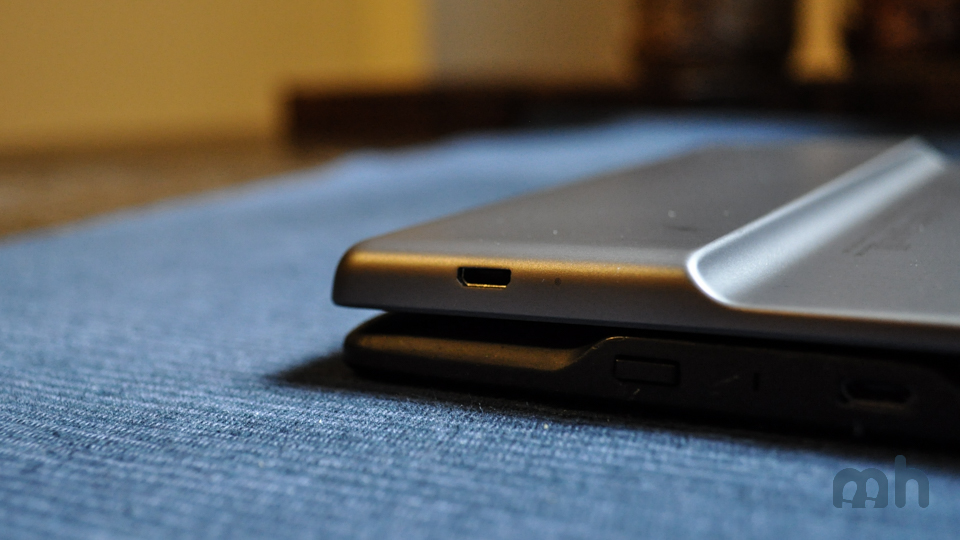 To be fair, there’s quite a few major UI and hardware changes from the other iterations of the Kindle that previous Kindle readers will notice.

Most noticeably, the device is constructed out of aluminum, instead of the rubber-like plastic used for other versions. Strangely though you wouldn't have thunk it, we loved the Paperwhite plastic backing because it provided noticeable padding and fair insulation from physical shocks. It was also instrumental in providing readers a secure grip. The Oasis doesn’t have any of this; it’s a sleek device that resembles more phablet than e-reader, but is offset by a slightly 6.3 inches x 2 inches  (16 cm x 5 cm) raised bar on the side.

The Oasis has a completely different profile from the Paperwhite and other Kindle versions. It is most notably much wider and a tad shorter than the Paperwhite. The raised bar has also been moved to the left (or right) side of the device for one-hand holding. Previously, it was set in the middle.

It is a fairly slim beast. 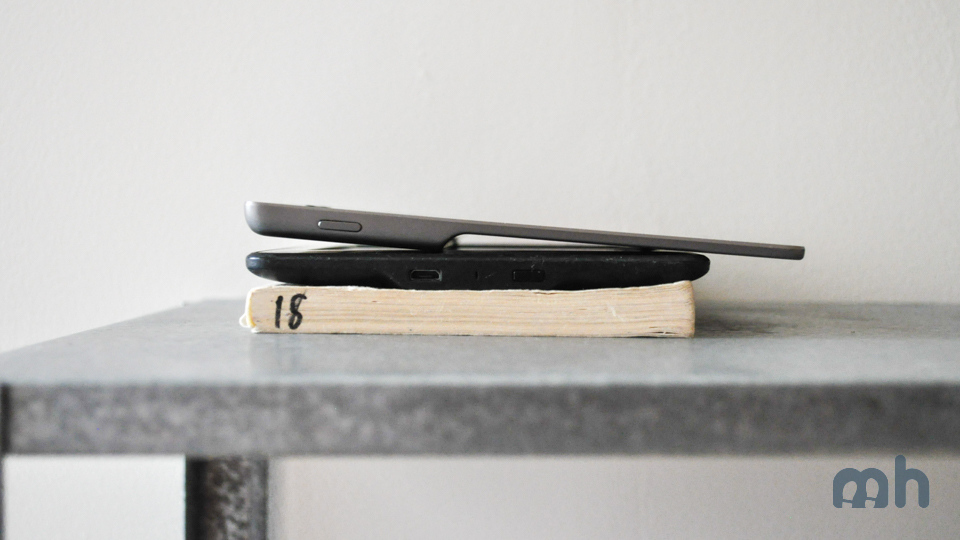 The screen is also distinctly larger with the extra inch—the Oasis has a 7-inch screen compared to all the other Kindles' 6-inch screen—which means its easier to read PDFs. (It is not possible to enlarge the text on PDFs). Before, I relegated reading PDFs to the iPad Mini because of its larger screen. Though it's still not the most ideal, the Kindle Oasis' screen renders PDFs sufficiently in a way that does not make me want to turn and reach for another device.

The page-turning refresh rate on the Kindle Oasis is also absolutely light years ahead, as compared to other Kindles (Amazon declined to provide technical details). Page turning is an absolute delight: In the previous Paperwhite, it could take multiple swipe attempts simply to go to the next page. There are also dedicated, customizable previous and next buttons that add to its ease of use.

In layman’s terms, if we compared the refresh rate to the speed of driving a vehicle, the Paperwhite is able to go at about 30 mph. Though it wasn’t blindingly fast, it was sufficient to get us to our destination. The Kindle Oasis goes about 70 mph – and while by no means is it a Ferrari, its definitely a league above.

The UI also has undergone some changes (left is Kindle Oasis; right in Paperwhite); the brightness, text size and settings have been moved around slightly with new icons. In all in all, it's not a big deal, though.

Some funky, if not completely random, observations.

To be completely honest, there wasn't a ton of things that made me think it was worth the upgrade. For one, I don't listen to audiobooks at all. Two, I fall asleep so quickly while reading (often because its late at night), that I barely notice the fact I can turn things with one hand. The buttons are great but it isn't as life-changing as the Paperwhite backlight is.

In fact, I kinda miss the plastic because I tend to kick my devices off the bed while I'm sleeping. I worry more about the Kindle Oasis getting scratched up during the night.

Noticeably, the battery also doesn't seem to last as long as the Paperwhite, probably because the adaptive lighting may require more energy. 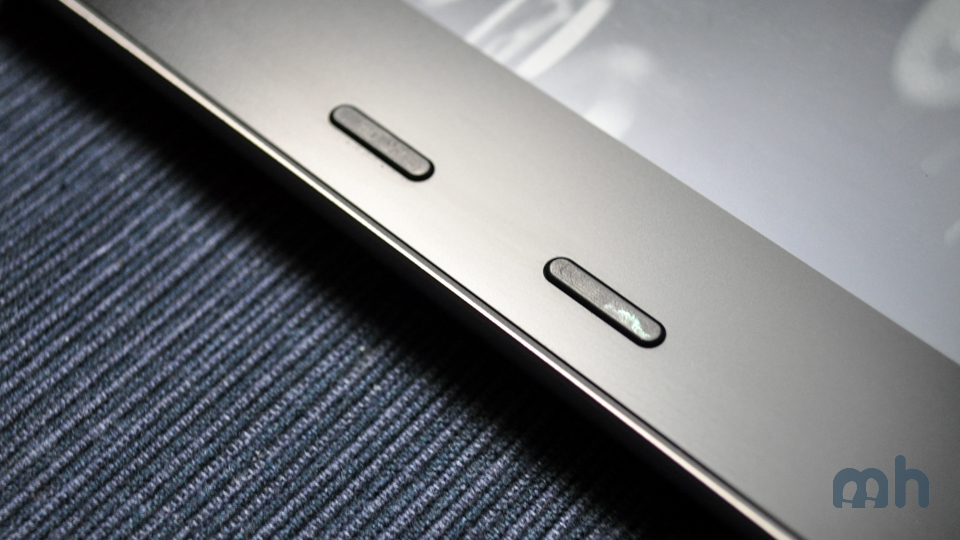 The updated materials also seem to make the Kindle more delicate, which is kinda ironic, since Amazon bills this as the Kindle for traveling. This was evident after some basic wear-and-tear in a bag—there was noticeable discoloration on the bottom button. Let's include a cover, shall we.

The slim profile did make it easier to fit in the smaller pockets of various bags we've been traveling around with, something we weren't expecting. The Kindle Paperwhite didn't always fit as well (or at all, period).

On the plus side, the upgraded UI, dedicated page-turning buttons, and increased refresh rate were definitely things we loved. Interestingly enough, I did like referring to it more for recipes than an iPad while cooking. This is probably because I felt more comfortable with its "waterproof" feature than my definitely not-so-waterproof iPad. And there are buttons.

Back to that waterproofing thing, again.

Marinate on that for a second.

The main selling point of the Kindle Oasis is that it can “withstand immersion in up to 2 meters of fresh water for up to 60 minutes.” Meaning its time to dunk it into the the Dead Sea to see how it fares. Kidding. I went three years ago already and I have no intention of returning soon.

Ideally, the Kindle Oasis targets people who love going to the beach, hanging out at pool parties, and love, love baths. Good, because I do love baths and occasionally, I get kinda drunk in the middle of them. (In fact, I recently dropped my phone in the shower, which led it going dark for the next 36 hours in a tub of bomba rice. No more paella for me.)

Amazon has a pretty handy guide for dealing with that if such things happen. Essentially, remove as much liquid as possible from the device and let it completely air-dry before attempting to turn it back on. Or, stick in a bin of rice overnight. Do rinse it with fresh water if any salt has gotten inside.

It's general advice most techies would recommend.

So, I took a bath with the Kindle Oasis.

It did not change my life. No, I did not try to read underneath the water with it in a rather ridiculous experiment. But, there must be some peace of mind knowing you have a great reason to complain about if it doesn't live up to the claims.

By the way, there's a one-year warranty on this thing.

However, I would like to note there's nothing until that moment when a $700 device gets dropped into the tub, then do you realize how addicted you really are to technology. Even though the Kindle Oasis and Kindle Paperwhite cost significantly less than a phone, I cannot tell you how annoying it is to live without a Kindle once you've gotten used to its presence in your life.

Should you upgrade? Time to give it straight. 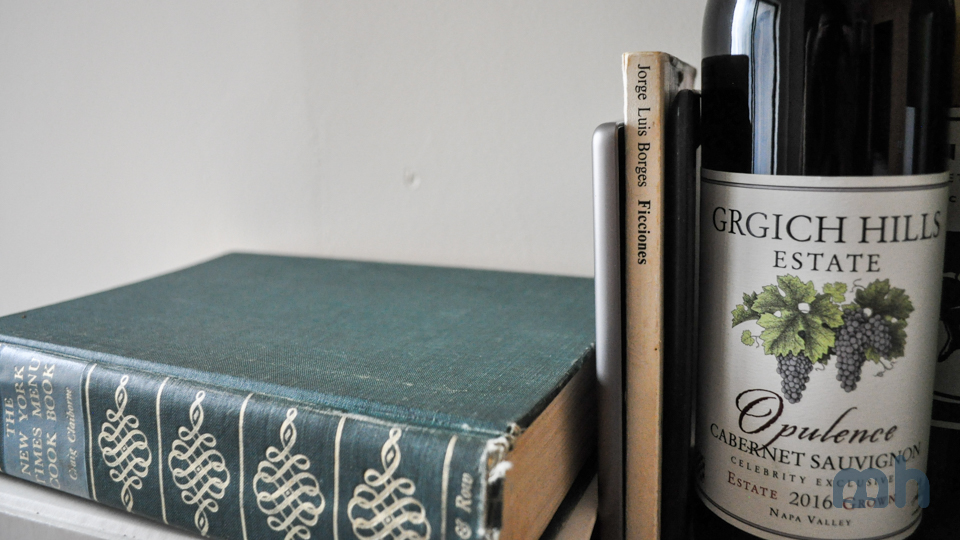 This product was provided on loan.