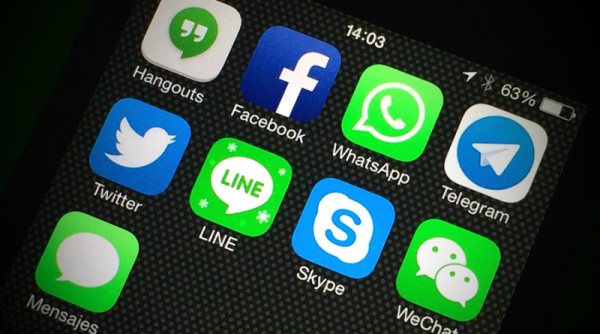 Because it's simply not efficient to snail-mail these days. In four years of living abroad, I’ve learned that maintaining relationships across continents—like reminding people I'm still alive and love them!—takes resources.

Good thing what most people need is just some ol' fashioned Internet, even if it’s just 3G, to communicate for free. What’s that rule about 10,000 hours? I've probably logged that much time through messaging and VoIP apps alone. And while Voice over Internet Protocol (VoIP) really means any internet or broadband-based phone service, I take a broad definition to include messaging services. These days, they're all sort of converging anyway. 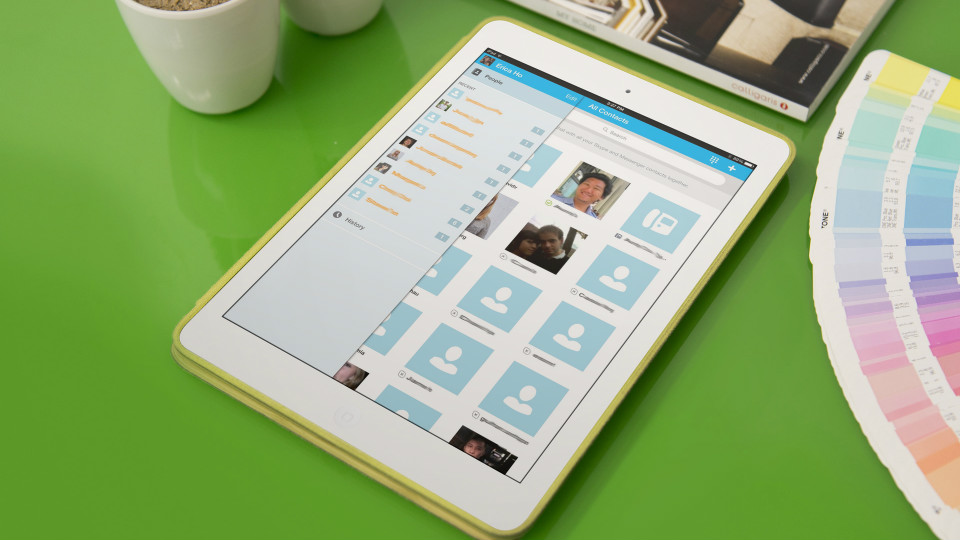 Use: Now and then
In short: Overrated

Skype was one of the first guys in the game and they’ve had staying power because of that. Most people defer to suggesting “Let’s Skype” when they want to video chat. (People my age, at least. Maybe it's generational?) Too often, I’ve found the quality to be total crap, though I guess this depends on internet connection speeds, but I’ve moved on to other services. Having a call get broken up or drop repeatedly when you haven’t spoken to someone in months is really, really frustrating.

I do give Skype credit for—ha, lame Skype pun there—is its international calling options, which range from pay-as-you-go to monthly plans. Adding money to an account and calling anywhere in the world really is as easy as a couple clicks. 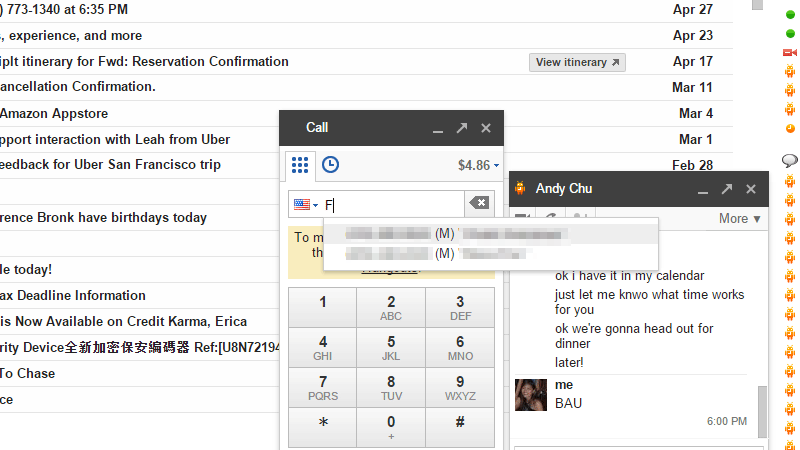 Use: Frequent
In short: Lots of potential

Google Hangouts now bundles up Google Voice, which is its phone service, and Google Chat, the messaging service. So, it’s possible to message contacts, video chat and also place phone calls to any number all from the same platform essentially.

The problem is that it hasn't picked up steam as a mobile device messaging service compared to some of its competitors — but there's some evidence that it's eventually getting there. For now, it’s still something my friends use when they’re logged into their email on their computer while working to message. And of course, then I'm just talking about people with Gmail.

It's nice that Google Hangouts (or the artist formerly known as Google Chat) can place a phone call right in the app with the correct Google Voice number showing up on the recipient's caller ID. For those that don't have a Google Voice number, the call shows up as "unknown.”

But because I set up my Google Voice number in the U.S., I can call any +1 number for free, no matter where I am, whether that's Argentina or China. International calls (in the sense, they're international from the U.S.) do incur a small cost.

Word on the street is Google will soon be offering its own international call and data plan. I’ve always been pleased with how well Google Voice calls work—much better than Skype, IMO—so I’ll definitely be signing up for that when that's launched. 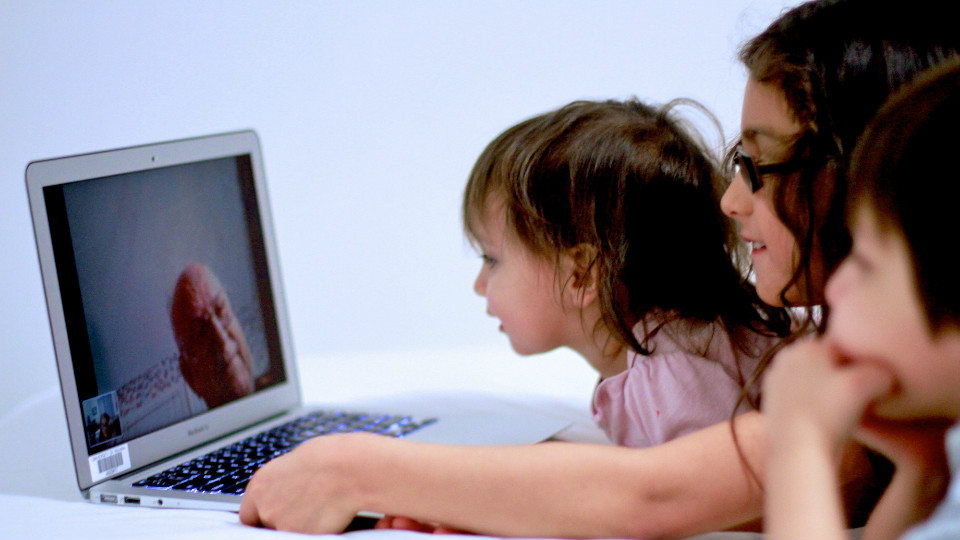 The family that FaceTimes together stays together. (Alec Couros/ Flickr)

Use: Frequent
In short: Perfect… for iPhone users

Out of all the voice and video call options out there, I find FaceTime to consistently deliver the best quality. The clarity on calls is so good that I recommend not even sipping a drink while talking on it for sake of the person's hearing on the other end. (It'll sound like someone is swallowing in their ear. I’m not even exaggerating.)

Audio and video calls pop up as a regular call would, taking up the full screen and producing a ring (at least that’s the default setting) so it’s hard to miss when someone is calling.

The thing is, it’s obviously no use if the person I want to talk to is an Android user. My family, however, happens to be an iPhone family and my boyfriend also is an iPhone user, so my call log is dominated with FaceTime dials. The number of FaceTime users will only increase as the Apple empire continues to proliferate. 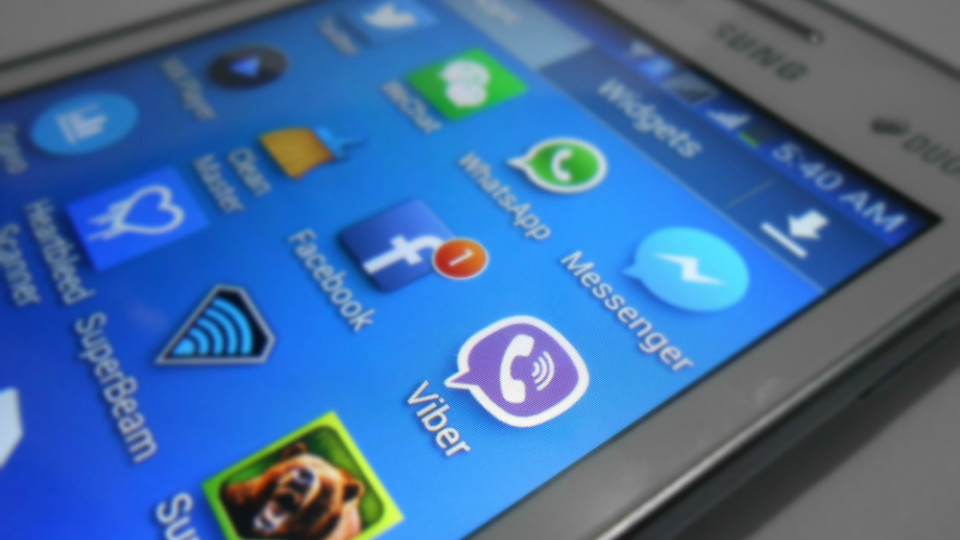 Use: Now and then
In short: Underused

Viber, in my opinion, is a better version of Skype. It has written message capabilities and call services designed to mimic placing a call regularly. All phone contacts get loaded into the app and gives users the option to place a “free call” or “free message” to Viber contacts or dial them regularly. Once connected, though, I’ve always found the quality to be very good.

In order for a call to pop up on the phone, the app needs to be open. Usually when I connect with someone on Viber it’s a matter of telling people you're going to jump on the app with them via another messaging service and then placing the call (silly, but hey). Viber does let users dial out to normal lines instead of through the app but at a cost. It does have its fans, though, which has close to 400 million users according to VentureBeat. 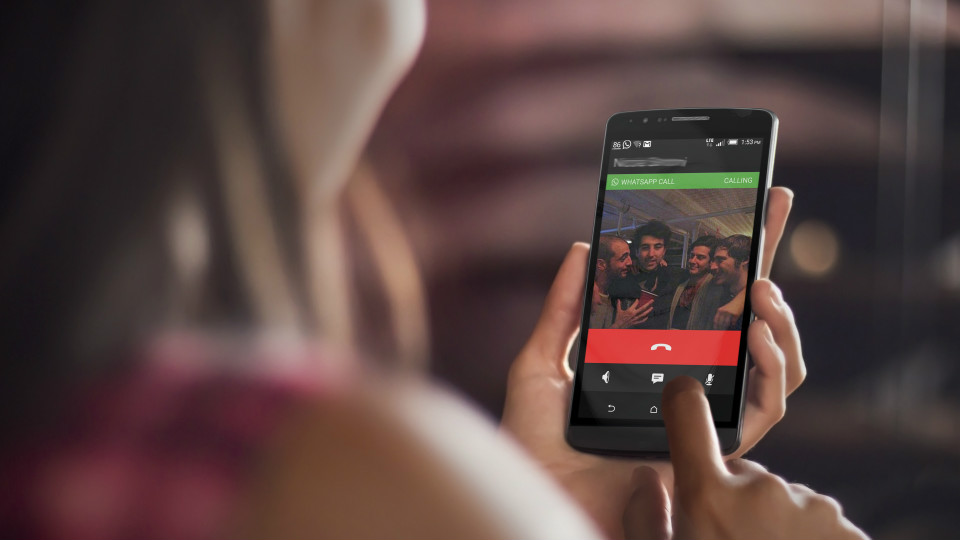 Calling on an Android. (Placeit)

Use: Aaaaall the time
In short: Indispensable

WhatsApp isn’t as much as a VoIP service or multi-platform as the others but I could never write this post without including it. That’s because it’s the world’s preferred messaging service even if that’s not the case (yet) in the U.S. The reason I use it so often is primarily because everyone I converse with regularly is on it. Social circles do carry over to technological usage.

The interface is simple and no frills, with all the functions to send photos and voice notes, and that’s the pure genius in it. It also is the app of choice for keeping up constant conversations, whether on your phone or web.

WhatsApp also now has an in-app call service, currently only available for Android users. The iPhone version is slowly rolling out for Apple users, with mixed results, but that's very likely to change for the better over time. Its reported 800 million active users, including me, will have most all of its telephone communication needs met right in the app.

Because 7 billion people, and 1.4 billion of those poeple live in China, with WeChat comprising 500 million active users. But other than that, no reason to use it until Chinese world domination is on the horizon. Then, in that case, we all must brush up on our Mandarin. 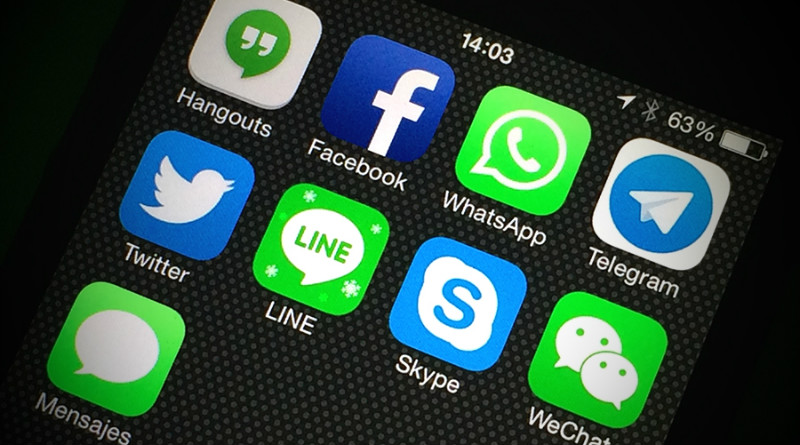