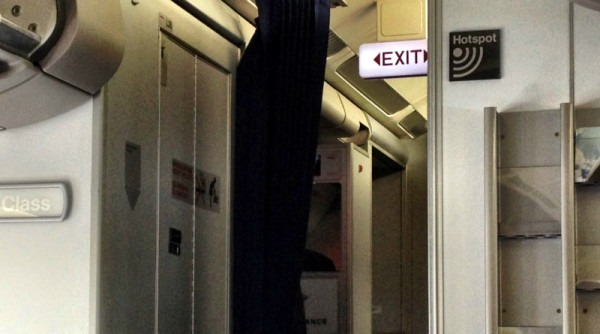 Going to bite the bullet to get online, are you there? This is the complete set of tricks to doing it the right way without getting robbed and coughing up full price.

Paying for Internet on a flight can be extortionate. It probably doesn't help that sometimes I cave in with the intention of working only to find myself wandering over to uh, Facebook. Let's forget about that $25 I just put down to be "productive." But fortunately, there's a bunch of ways to make the pain hurt a little bit less when you're heading home for the holidays (eek) or en route to Prague (yay).

The problem with in-flight Wi-Fi is that the price is always a surprise by the time until you get on the plane. To make matters worse, most people won’t find out the cost until the plane has reached cruising altitude and the crew has turned on the system exactly how bad the damage will be. Fortunately, this chart shows the correlation between all the airlines, prices and distance so you can make an educated guess. Expect coast-to-coast flights to cost around $25.95.

Not only is it expensive, it’s also sometimes substantially cheaper if you prepay for a Gogo internet pass before you leave for the airport depending on what route you’re flying. For example, an all-day pass costs $16 no matter how many flights you connect or get on. In terms of cross-country flights, this could save you up to 40 percent of the in-flight price… but you might want to forget it for flights under 1,370 miles. Daily passes generally aren’t activated until you login to your account on the plane so it’s possible to store them until you’re ready to use it. (Flight passes bought in-cabin are often only valid for that particular flight and usually cost more than the pre-purchased cost).

The monthly passes also can offer great value, although those are pretty much activated on the date you buy them, meaning you shouldn’t buy them until right before traveling. It’s not cheap: even the most economical plan starts at $49.95. The airline-specific unlimited pass is only worth it if you’re planning to use it on at least four mid-range flights in the same month or two cross-country flights in the same month. The Gogo unlimited pass that applies to all airlines is only worth it if you’re using it on at least five mid-range flights or three long-haul flights over different airlines in the same month.

Combine this with the fact that its possible to find and use Gogo promotion codes that knock the price further down and it's almost a no-brainer to consider buying ahead of time.

So why not fake your laptop as a mobile device? For luddites, the user agent is something in software that identifies the device you’re using. There are many ways to spoof your user agent so it appears that you’re using an iPhone instead of a MacBook Air. Theoretically, this would prompt Gogo to ask the user to pay up with the cheaper price though you’ll pretty much be stuck surfing the Internet in a mobile-optimized view the entire time.

Maybe the savings could be possibly worth it. It is actually not possible to buy the mobile pass first and then sign out and login on your laptop to lock in the cheaper price. (You can upgrade it though.) But if you’re willing to pass up using your laptop as the main device, the savings can be substantial. For instance, the full price on a recent SFO-JFK United flight cost $24.95. The mobile price, in comparison, was only $12, making the total savings $12.95.

You can’t connect to more than one device technically at a single time. But it might be possible to use either a paid or free option to tether the signal—by turning your phone into a hotspot—so you can use the internet on multiple devices or instantly befriend the dude sitting next to you. Depending on your device, you may be able to share it via Wi-Fi, Bluetooth or USB. FlyerTalk users report that iPhones will have a hard time doing this through Wi-Fi.

If your goal is to simply use your laptop and mobile device simultaneously, there’s a better option: unbeknownst to most people, there are smartphone apps that work without having to pay for the internet. All you have to do is join the network.

There are apps on your phone that work without paying.

Not too long ago, I found out certain apps on a smartphone were able to work without paying to get past the internet firewall. Simply all you have to do is join the network (so that you’re connected) and then go into the app. The majority of the apps that we were able to test and that worked were Google apps, so if you’re in luck if you rely on Gmail or Google Voice as your life line. For the full list check it out here:

The connection doesn’t work as well if you’re past the firewall, obviously, and don’t expect notifications to work as they normally would. If you want to get an update, you’ll have to jump into the app itself to receive the latest and greatest. For instance, if you’re dabbling in Google Voice, you’ll have to open the app back up to see if you’ve gotten a response from whomever you’re texting. It may be annoying but at least it’s free.

Don’t expect to be streaming.

However, it only blocks the most popular services, not free (or illegal) video online streaming sites like CouchTuner or Project Free TV. It’s possible to load up Spotify or Rdio; I’ve certainly loaded up some Carly Rae Jepsen and enjoyed some head bobbing on a plane. But really for the sake of people around you, I’d hold off on the streaming to be courteous but there’s nothing really there to stop you if you wish to participate. There’s something to be said for good karma.

There’s a reason why no one will let you access your beloved video. Satellite internet speeds (512 kbps) often rank somewhere between dial-up (0 kbps) and wireless internet speeds (1 Mbps). In our previous review, our speeds came is at 816 kbps, just above satellite internet speeds. This is fast enough to do e-mail, basic surfing and some audio streaming. You might be even to load up a video stream… if you have the patience of a saint to let it load.

The exception seems to be JetBlue’s FlyFi, which seems clock in at 15 Mbps according to Engadget. There’s a catch: expect to pay $9 per hour for it. No joke there.

There are geographical limits.

Though in-flight Wi-Fi may be offered on certain routes, don’t expect it to be available during the entire flight. I haven’t had issues on many domestic flights but the connection could be sketchy if you’re going international. Gogo posts a disclaimer—like many people actually read it—when you first connect that its internet service may not be available everywhere. A while ago, one of our readers reported their connection dropped off around the International Date Line on a flight from San Francisco to Beijing. “I guess tomorrow doesn’t have satellite internet,” he quipped. 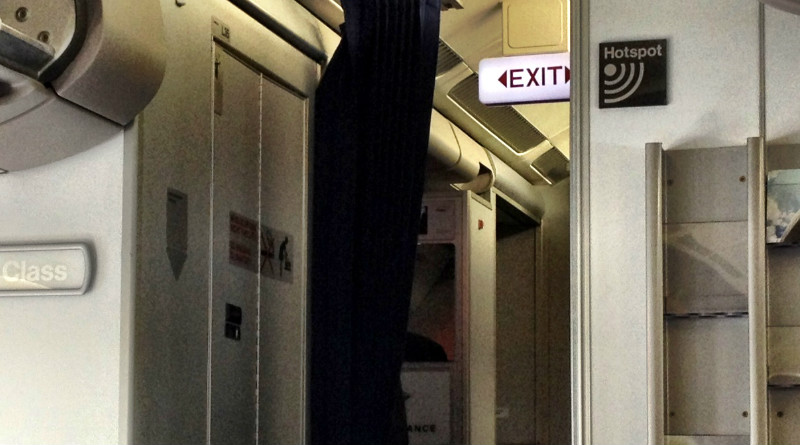