Chances are if you’re hooked up to the interwebs, you’re using Gogo satellite internet. Starting with Virgin in 2009, Gogo provides internet to American, Delta, AirTran, United, Alaska, US Airways, and Frontier. Basically, if you’re flying an American airline, you’re going to have a tough time getting online with someone else. It’s also a really expensive fix for kitty cat video addicts.

Prices for connecting apparently tend to vary depending on the flight. I’m actually on my way to California from New York (JFK-LAX) right now, and I can tell you that at $21.95 for the whole flight, it isn’t particularly cheap. Given that this is supposed to last six hours, $22 may just be worth it if you’ve got to get some serious work done for this particular leg. Luckily, it’s just enough money that I almost feel guilty I’m not getting actually work done, so much that I’ve paused Life of Pi to write this. Oh, Richard Parker, we’ll get back to you in a second.

Choices generally range by the hour, by hour blocks, by the flight or by the month. Basically, the flight pass you choose is associated with your Gogo account, which you can then use to log into any device once you’ve purchased it. Speed is pretty good, but one of the main drawbacks about the whole thing is that you can’t log into multiple devices simultaneously. If you decide to log in to your phone, it interrupts your current connection. And I thought I was going to be surfing the information highway like a boss. 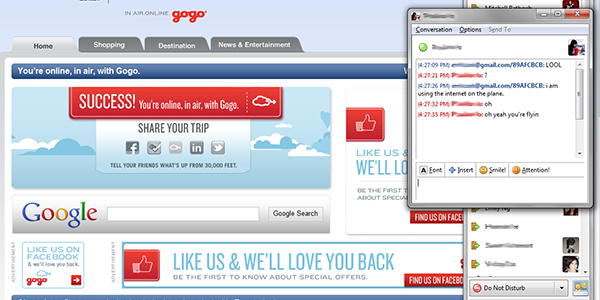 Interestingly, the prices for connecting a mobile device are substantially cheaper than the price to connect to a laptop. To connect for the whole flight, it costs $12.95, about 41 percent cheaper than the $21.95 I initially paid. However, if we’re going to be diabolical here, there’s nothing to suggest that you couldn’t lock in the $12.95 mobile price first and then switch to your computer, thus saving you $9. It’s also possible you could spoof your computer’s browser settings so that Gogo picks it up as a mobile device to get the cheaper rate, though we didn’t get a chance to do this. (Anyone want to try?)

If you’re willing to pre-pay in advance, the best deal comes in the form of an all-day pass from Gogo for $14, which is potentially much cheaper than what it would be for individual segments or if you have a particularly lengthy flight. This, of course, requires knowing that your flights will be Wi-Fi equipped and only works if all your flights are on the same airline. That means no crazy jumping between American and Frontier, alright? The pass is then activated, we assume, when you next sign-in.

For Gogo’s unlimited monthly prices, it’s a completely different story — the prices are pretty much fixed at $49.95. This isn’t worth it if you’re only doing one round trip in a month; it actually ends up more expensive than if you just purchased each individual segment. But Gogo occasionally runs promotions—ironically, you can’t find them unless you’re connected—and the best one we could find out there takes 15% off if you use promo code TAKE15, saving you $1.44.

Let’s take this show on the road, though. (Insert 30 minutes of mindless surfing.)

So I’ve determined that I love that I can check my email, but I also don’t love that I discovered I have an email from an editor waiting for me. I don’t want to look at it. Ignorance is bliss. I think business travelers will hate this. Wait until they’re expected to expense it. But if I really wanted an expensive excuse to waste my time even further? Facebook birthday wishers, look no further.

The real test, however, is all about video streaming. By default, Gogo restricts streaming from Netflix and HBO Go for the obvious reasons: if everyone on the plane was watching the new season of Arrested Development, no one could check their email. YouTube fares pretty well though in standard resolutions; HD streaming loads but, unsurprisingly, it’s not quite HD. Other streaming sites are hit and miss. The key word here is it is okay; it’s definitely not great. In other words, it’s exactly what I expected. 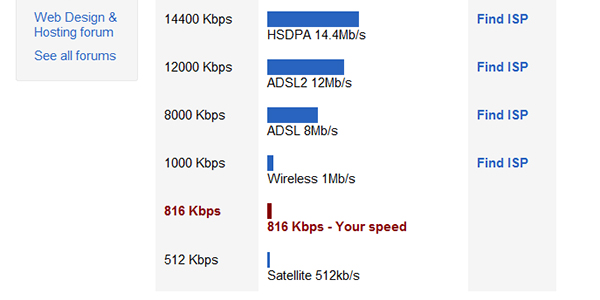 Our own scientific bandwidth test.

Wonder what the reason is? Chunking CNET’s Bandwith Online Meter at it, I see Gogo’s service comes in at 816 kbps down, which well, isn’t terrible. It ranks just above satellite speeds (it is satellite-powered internet after all) but below your typical wireless and DSL speeds. I’m not an expert on this. I don’t think most people would notice, unless they’re trying to download a Life of Pi Blu-ray rip. Still, it’s fast enough that I think in-flight Wi-Fi has finally stopped being some gimmicky, hokey feature that didn’t work in years past.

Though I’m not really having any issues, Gogo doesn’t guarantee you’ll be online the entire time if you run into a bad patch of turbulence. In fact, they have a disclaimer on the home page to cover their own booties:

Gogo is available when your flight is in the continental United States. Service may be interrupted if the aircraft travels outside this area.

Route Happy, a hotel search engine, (no affiliation!) actually found that only 38% of domestic flights have internet in a recent study, and, sometimes, it’s only up for about 44% of that time. If you’re lucky enough to experience it on one of the 38 international flights that leave the U.S. every day like Matt Schrader… well, we’ll let you tell in his own words.

If you may remember, Matt once also crawled through a hole in the Mongolian border, so we have a soft spot for him. On a recent international United flight from San Francisco to Beijing, though, his satellite coverage dropped about halfway across some Arctic tundras. “Right around the international dateline!” he emailed me, upset that he had paid for the whole flight. “I guess tomorrow doesn’t have satellite internet.”

Matt also pointed out to me that Facebook, Spotify and YouTube all seemed to work pretty well, though he had to sign back in two or three times over a six-hour period. This seems to fall in line with our conclusion that spending money on in-flight Wi-Fi is an excellent waste of your time.