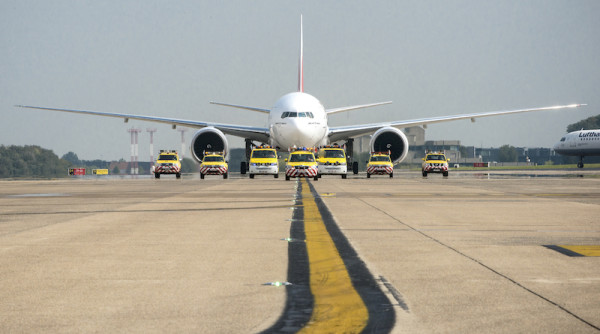 If you have 17 + hours to spare and want to travel on the longest commercial flight, here's the ticket.

Emirates currently holds the record for the world's current longest active commercial flight. Airways News reports that the flight, which runs non-stop from Dubai UAE to Auckland in New Zealand touched down on the first after a 8,824 mile journey. Here's the thing: airlines have been vaunting for this title for years, often with no clear definition as to what "longest flight" means.

This new flight is a full 246 miles and 25 minutes longer (17 hours and 15 minutes when flying eastbound) than the previous record holder. Qantas, with its non-stop 8,578-mile Dallas to Sydney flight taking 16 hours and 50 minutes, now sits in second place.

Emirates even planned to outdo itself by the end of the month. They were scheduled to operate a flight from Dubai to Panama City starting March 31. However, days after the Dubai-Auckland flight was announced, travel blog One Mile at a Time reported the Panama-bound route has been canceled. Had it run, the flight would have covered a distance of 8,588 miles with a flight time of 17 hours 35 minutes—making it the longest flight by duration.

This brings up an interesting question. Should we gauge the longest flight by distance traveled, or by time spent in the air? Different metrics give us different results. Sort of.

Emirates has the longest flight by either measure. Middle Eastern carriers and airports make up a majority of the top 10, with Los Angeles occupying the top spot by destination. Sixteen-plus hours in the air, and then Disneyland is less than an hour away by car. Score!

But, none of these flights compare to the longest ever commercial route: the discontinued Newark to Singapore flight on Singapore Airlines. With a distance of 9,535 miles and a scheduled flight time of 18 hours and 50 minutes, none of the current longest flight records come close.

In fact, many of the world's longest flights by both distance and time are now discontinued. A majority of those flights were discontinued between 2008 and 2014 because they weren't profitable (presumably because of fuel prices at the time). Singapore Airlines also flew from L.A. to Singapore in just over 18 hours. Delta Airlines once flew Mumbai to Atlanta in 17 hours and 55 minutes.

But it seems ultra long-haul flights are ready to make a comeback. United Airlines plans to open up a route between San Francisco and Singapore effective June 1, 2016. The Guardian also reports that Qatar Airways plans to start a 9,034-mile-long route between Doha and Auckland.

What's with the resurgence? Aside from a good ol' fashioned “mine's bigger than yours” competition, odds favor low oil prices. (There might an increase in consumer demand as well, but oil seems more likely.) If prices stay around where they are, expect to see more airlines rolling out new ultra-long haul routes in the next year or two.

If airlines keep competing for the world's longest flight, what's the farthest they can possibly go given the aircraft models in use today? Turns out we are pretty close to maxing out our current technology. The commercial airliner with the longest range is the Boeing 777-200LR. It has a maximum estimated flight distance of 9,285 nautical miles (10,685 regular miles) when fully loaded.

Remember—any journey longer than 12,441 miles can be made shorter by going in another direction. We do live on a sphere and all.

Since fuel prices the lowest they've been in years, airlines are rolling out new ultra-long haul routes once more. Emirates Airlines holds the number one spot with their flight from Dubai to Auckland—but how long will they remain on top?