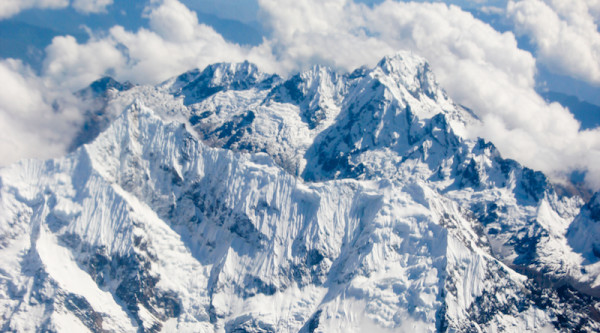 Millie Sanchez / Flickr
This is part 2 in Extreme Travel series.

Last year was the warmest on record by far (and that’s been the case for awhile now). If you're looking to get as far away as possible from rising tides, look no further than the highest city on earth.

But be warned: this is not a tourist destination. Life gets tough on the edge of the earth.

At 16,700 feet above sea level in the Peruvian Andes, La Rinconada is the highest city on earth. It's not a place for the faint-of-heart.

Aside from a small police presence at the border, the town is essentially lawless. Most of the 50,000 inhabitants live without electricity, running water or plumbing. There is very little in the way of infrastructure—garbage and waste is dumped by households directly outside of town or in trenches in the street.

Despite these harsh conditions, the population of La Rinconada has grown rather rapidly in recent years. The reason for this? A surge in the price of gold.

The economy of La Rinconada is based mainly in gold mined from beneath La Bella Durmienda glacier in the Cordillera Apolobamba range of the Andes. The mines are unguarded, unregulated and often dangerous. Miners work for 30 days under a cachorreo system where, on the 31st day, they are allowed to take as much ore from the mine as they can carry as a form of payment.

Peru issues tourist visas at ports of entry for up to 90 days. Visitors also have to provide proof of return or onward travel. A yellow fever vaccination is recommended.

There is no easy way to get to La Rinconada. To start, international visitors should fly into Alejandro Velasco Astete International Airport (CUZ) in Cusco, Peru. From Cusco, take a train or a bus to Puno—which sits on the shore of Lake Titicaca.

Here's where the trip gets tricky. It seems the only way up to La Rinconada is to hitch or buy a ride up the mountains. There may be a bus every once in awhile, but nothing is routinely scheduled. Travelers could rent a car and try to drive up themselves, but the roads are dangerous and the landscape inhospitable. There is little room for error.

There isn't much to do in La Rinconada itself aside from chatting with locals and getting to know a different way of life. Most visitors are backpackers looking for a night's rest, journalists, volunteer and aid workers along with the occasional government official.

There's always the option to do some mining if you don't mind the incredible risks to life and limb. But the real draw of the region is the adventure: hiking in the untamed Peruvian Andes. It's definitely not something one can do on a whim. Inexperienced backpackers need not apply.

A working knowledge of Spanish, Quechua and Aymara.

Your own water. Though La Rinconada sits by a glacier, the runoff is heavily polluted by waste from the town and from mercury used by locals in the gold extraction process.

Sunscreen. At that high an elevation, visitors and locals alike are bombarded with much higher levels of cosmic radiation than at sea level.

Layers upon layers of clothing and a few good pairs of boots (crampons recommended). The average temperature hovers at freezing year round. Expect harsh winds and a butt-load of ice in the world's highest city.