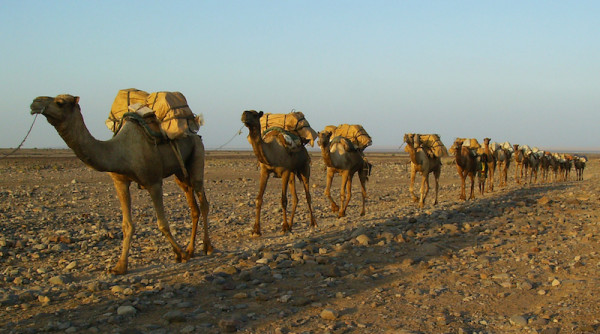 Achilli Family / Flickr
This is part 3 in Extreme Travel series.

Do proverbs say anything about April snow?

We just got a few inches up in Boston. In April. Mere days after it was a perfect 75ºF. I am sooooo beyond over it. If you're as sick of breaking out the winter jacket as I am, it might be high time to head to the hottest place on earth. (I'm seriously considering it right about now.)

Sure, Death Valley holds the record for highest temperature ever recorded. But that's not good enough for me. It has snowed in Death Valley in the past, so I'm not taking any chances. For truly unrelenting, brain-boiling temperatures year-round (with zero chance of a surprise winter wonderland), adventurous travelers are going to have to hoof it to East Africa.

At 430 feet below sea level, Dallol, Ethiopia is a mining ghost town by Ethiopia's northern border with Eritrea in the Danakil Desert. It sits in the middle of the Afar Depression, a geological low-point shared by Djbouti, Eritrea and Ethiopia.

The Afar Depression is most famous for being the site where Lucy, the Australopithecus skeletal specimen, was found in 1974. And while that region may be known as the cradle of hominids, don't expect much in the way of a hospitable environment in Dallol.

In the hottest place on earth, average daily highs for the year sit at a sweltering 94ºF, with average highs in June topping out at a whopping 116ºF. Winter lows hover around 76ºF. It's a wonder that humans ever settled in Dallol at all.

And yet they did—for about half of the 20th century. The reason: salt (potash) mining. From the early 1900s until the 1960s, Italy and the U.S. conducted mining operations in Dallol. And while the mining settlements are all but abandoned today, merchants from neighboring villages and towns still regularly travel to the hottest place on earth to stock up on salt.

Travelers are required to obtain a visa at an Ethiopian Embassy prior to arrival. Tourist visas are available for one or three month visits, with $50 and $70 visa fees, respectively. The U.S. State Department recommends all adults be fully vaccinated against Yellow Fever and Polio and should receive a booster dose before travel.

The easiest way to get to Ethiopia is to fly into the capitol city of Addis Ababa at Bole International Airport (ADD). From there, travelers can take a 12 hour bus ride to Mek'ele in the north. If you're not a fan of long bus rides, Ethiopian Airways also runs daily flights to Mek'ele (Alula Aba Nega Airport) from Addis Ababa. The flight is only 1 hour and 25 minutes.

No roads lead to Dallol. (It's also one of the more remote regions on earth, unsurprisingly.) Visitors will need to join a camel caravan or hire an off-road capable vehicle to make it there from Mek'ele. But don't let the difficulties deter you: plenty of agencies offer tours. 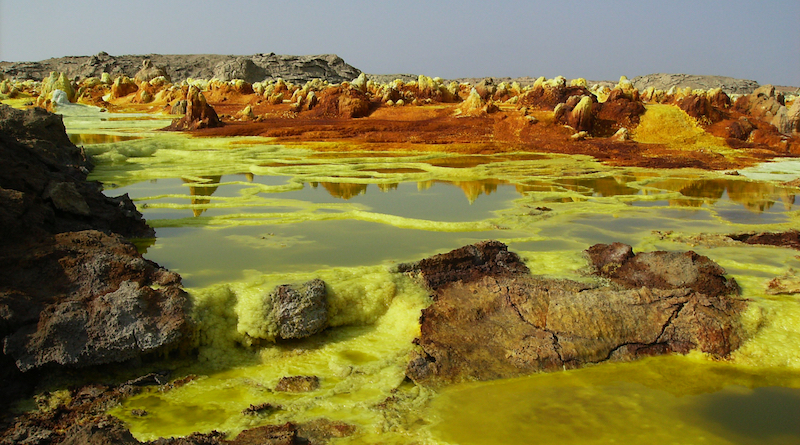 What remains of the mining settlement in Dallol is a rusted ghost town. And while it's always cool to walk amongst ruins, the main draw of the region is the landscape. It offers a wide range of strange geological features that make the trek more than worthwhile for geophiles. The extreme heat there comes from the earth as much as the air.

Dallol may be the closest thing to Hell on Earth. It is in an active volcanic zone, part of the East African Rift. The alien landscape features the Dallol Volcano (which last erupted in 1926), tons of hydrothermal vents, gas geysers and green acidic pools surrounded by ridges of salt. The land is colored with multicolored mineral deposits—sulfurous yellows and reds from iron oxide along with bromides, iodine and potash.

While the whole experience of Dallol might sound miserable to some, the harsh environment and adventure traveling through it brings is well worth the journey for others.

SPF 100, Ray-Bans and a big floppy hat. Expect a ton of sun in the hottest place on earth.

Gallons upon gallons of water—average yearly rainfall amounts to less than two centimeters.

Camping gear and enough food for the length of the trip. Don't expect to find a charming little BnB in Dallol.

A battery powered fan—especially if you're there in June. 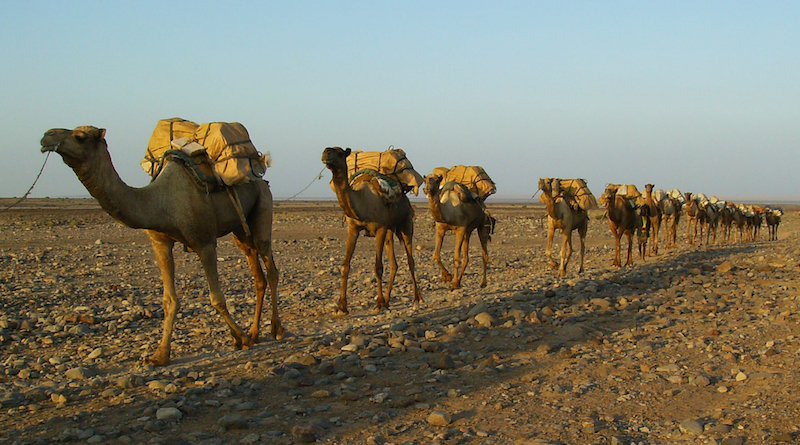