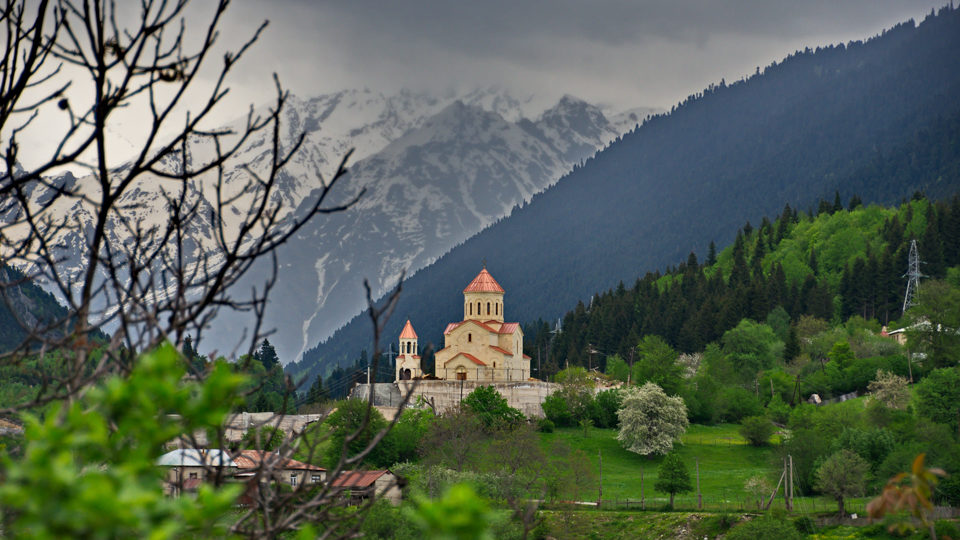 The first thing you'll notice about Georgia is that no one seems to know very much about it. In fact, despite the constant references to the American state, if the goal is to get away from American tourists, consider that mission accomplished here.

Nestled between the Caucasus mountains, Russia, Armenia, Turkey and Azerbaijan (with Iran looming), Georgia is a tiny, fierce country proud of its independence. Most people know Georgia used to be a Soviet state, and for 70 years, it was unwillingly occupied by Russia. Its 25-year old independence is as old as my sister, and we can all remember how different we were back then. The future will be an interesting one.

But despite a complicated history, Georgians are warm, open, laidback and happy to retain their low-key existence after a complicated past. Complete with its inventive cuisine and relatively unexported wine, indulgence is definitely available, especially when it's accompanied by boatloads and boatloads of cheese. All set behind the backdrop of one of the greatest mountain regions on Earth.

Adventure also calls, with opportunities for some of the best hiking around, well, the world. With rolling hills and craggy mountains as far as the eye can see, it's easy to understand why Georgians are so religious. (Especially after touring wine country and stumbling in an isolated 15th-century monastery side-by-side.)

Georgia is a minefield of biblical and historical proportions, often literally. The country is home to some of the oldest archaeological human remains, and legends such as Jason and the Golden Fleece. (Mount Ararat, the site where Noah's Ark supposedly landed, is nearby in eastern Turkey.)

So while Iceland has its glorious moment in the sun, there are also other places around the world that will only stay untouched for so long. Sometimes, the best reason to travel is perhaps not knowing very much at all to begin with, and then to go forth. 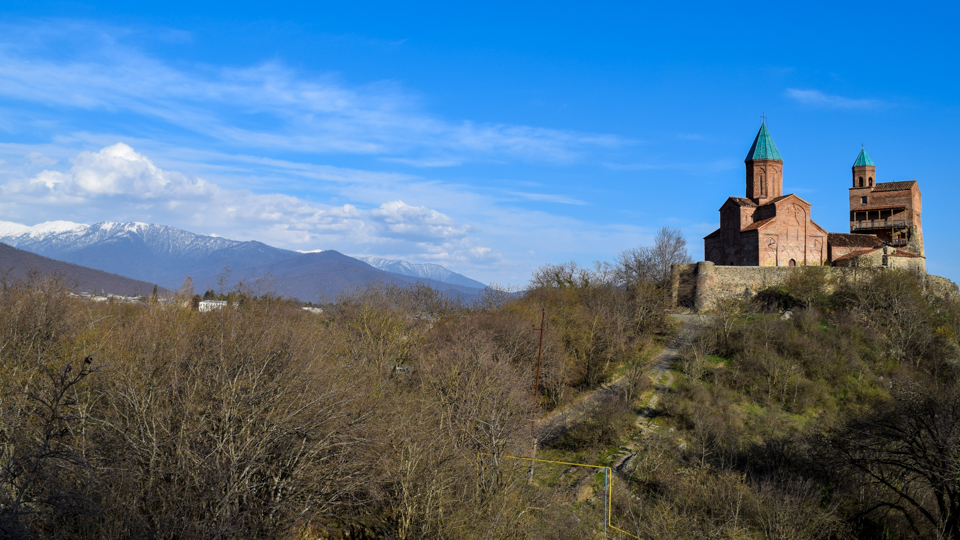 Georgian is the official language of Georgia (surprise!), and Russian is widely spoken thanks to its previous days under the Soviet Union. Knowing some Russian will go a long way for off-the-beaten track destinations. (Though Georgian does not adhere to a Latin script, and has its own script, the Romanized spelling does often translate phonetically, which is helpful for communicating.)

English is also spoken, though not widely. Most tourism establishments and major cities will have English speakers around to assist. This is further compounded by the fact that Georgia is not a destination that typically attracts North American visitors. In more rural areas, though, expect next to nothing, though tourist information centers can help out with more complicated communication issues.

Most younger Georgians have a basic, functional capacity for English, since it is taught in school. However, this is a rather recent development reflective of the country's political history; previously, Russian was the dominant foreign language taught in Georgian education systems.

The main gateway city and airport is Tbilisi International Airport (TBS), in of course, the city of Tbilisi. Visitors to Armenia may also find it easier to arrive into Tbilisi before carrying on via ground to Yerevan.

The airport is about 20 minutes by taxi (15-20 GEL) to the main city center, and about 40 minutes by bus to the city center (1 GEL). (In fact, it is so easy to get to the center by bus that this is the recommended option. Take bus #37 directly outside the airport.)

The one thing most people may realize about Georgia is that it's a lax place, especially upon entering immigration. (There is no form, nor a separate line for nationals and visitors.) This is reflective of its visa policy for many nationals. There is no visa required for Americans, and visitors may remain up to a year.

It is also similar for many other nationalities, though nationals from countries like Uruguay and Chile may find their stays restricted to 90 days. 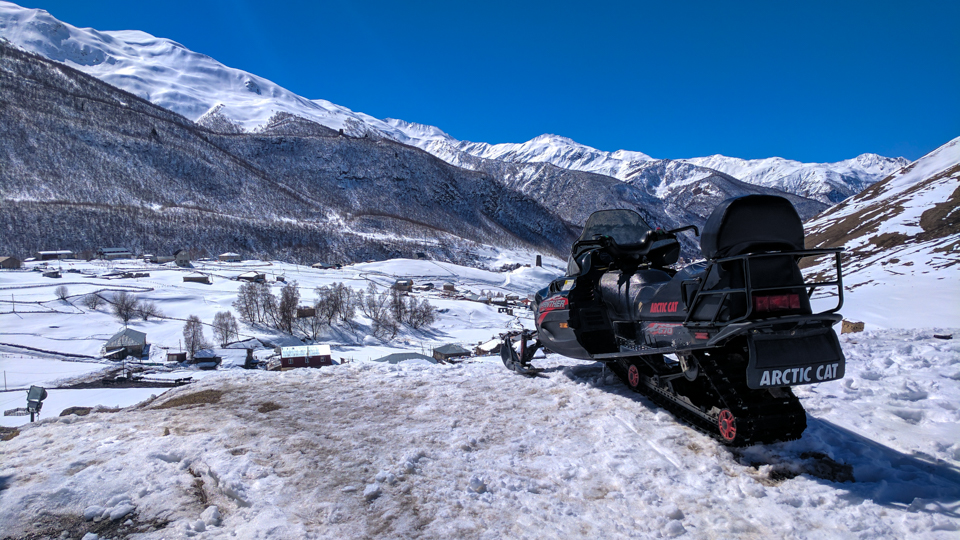 Georgia is a small country. Don't quote me on this, but I think you can drive like across the whole thing west to east in about 12 hours.

This makes getting around Georgia relatively simple, though most people will find that most routes will end up passing through Tbilisi... over and over again. This is because Georgia is a rather mountainous country, making certain routes difficult.

The roads are fairly well developed, so groups may find it easier to rent their own car or hire a private driver, though it's really not necessary and there are plenty of public and cheap options available.

Getting around Tbilisi itself is fairly straightforward, though most of it can be walked. There is a bus system and metro system. The metro system requires a metro card (it requires a 2 GEL deposit with .5 GEL per fare). The card can be used anywhere throughout the Tbilisi transport system. Taxis are also cheap, though be sure to get an approximate cost and haggle before stepping in the car.

In addition to buses, there are minibuses, known as marshrutkas, for traveling outside the city. The main stations for these departures are located next to the Samgori, Didube, Ortachala, Alavabari metro stations. A full list of destinations, associated stations and cost (as of March 2017) can be found here.

For longer destinations, the train, Georgian Railways, leaves from Tbilisi Central, which is found next to the Station Square One metro station. It serves most overnight trains, including those to Yerevan and Zugdidi. Zugdidi often serves as a marshrutka transfer point for Mestia and Ushguli. A first-class cabin to Zugdidi costs 29 GEL.

Flying is a rather underutilized option, but highly suggested for destinations like Mestia and Ushguli through Vanilla Sky. Keep in mind, weather is a real force during certain seasons and it's not uncommon for the flights to be canceled. It is highly, highly suggested to book in advance, as these are often small, 17-seater planes.

The main form of payment is the Georgian lari (GEL). The lari is a closed currency, meaning it will not be possible to exchange lari outside the country. It is highly recommended to exchange all money before leaving the country.

Cash reigns king here. Expect to pay for the majority of things from accommodation to activities in this particular monetary instrument. However, large, international hotel chains should accept credit cards. Small, boutique independent guesthouses, hotels and hostels for the majority will not.

Card is accepted for larger purchases. However, expect cash to be the easiest form of transaction: for instance, a 65 GEL ($26.81 USD) flight from Mestia to Tbilisi needed payment in cash at the flight office or through bank transfer.

It’s not necessary. It's not expected and on top of that, some restaurants (especially nicer ones) will automatically include a 10% surcharge added to to the bill. 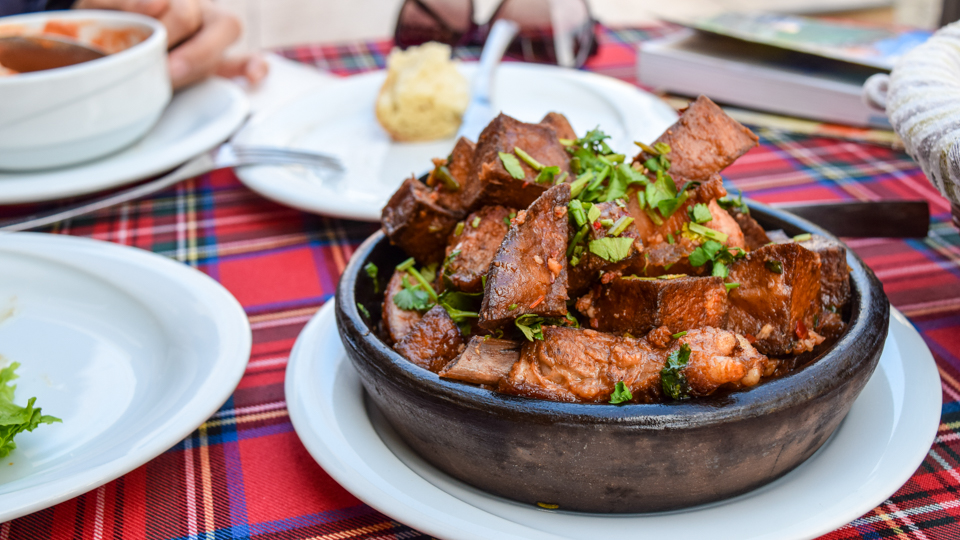 Georgia sits between the intersection of Russia, Armenia, Azerbaijan, Turkey, with neighboring influences from Iran. It is unsurprising Georgian food pulls from some of those influences, while like its language and culture, still retains its own culinary identity.

Other ingredients like walnuts, sour plums and pomegranate are culinary staples. Lamb and veal are common, as well. For imagine, think lamb stew in a tarragon, white wine and sour plum broth.

Georgian wine comprises thousands of different kind of varieties, thanks to its unique geographical topography and climate. It is relatively difficult to access Georgian wine from outside the country due to export problemsm but the Kakheti wine region offers tons of opportunities to sample the local flavors. Wines tend to be light, and err toward the semi-sweet variety, but for gastronomic aficionados, Georgia poses a unique opportunity for broadening the tastebuds.

Even for the least gastronomically adventurous, it's almost impossible to go wrong. 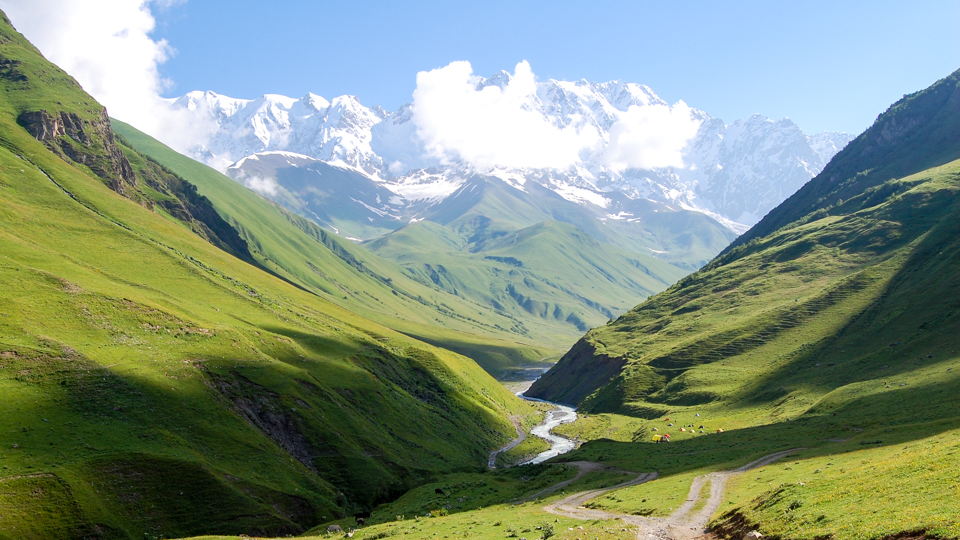 Georgia's proximity to the Caucasus Mountains (and its glaciers) means the water is generally fresh, great-tasting and, more importantly, potable. Drinking the tap is more than fine.

In fact, Russian tourists are known for flocking to Borjomi, the site of a favorite Georgian mineral water.

The country code is +995. The main mobile providers are Geocell and Magti. Grabbing a prepaid sim is as cheap as 1 GEL.

Georgia is an extremely safe country, with some of the lowest crime rates in all of Europe. 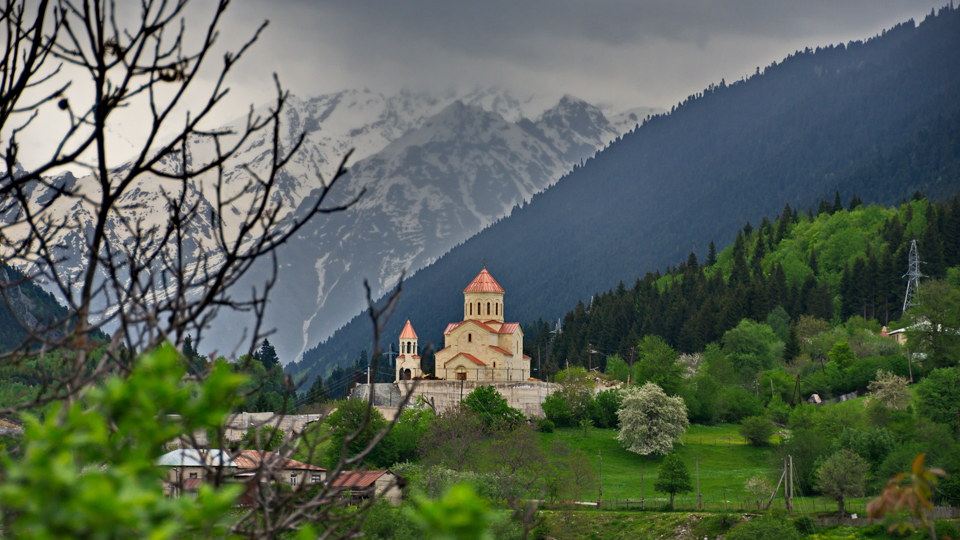