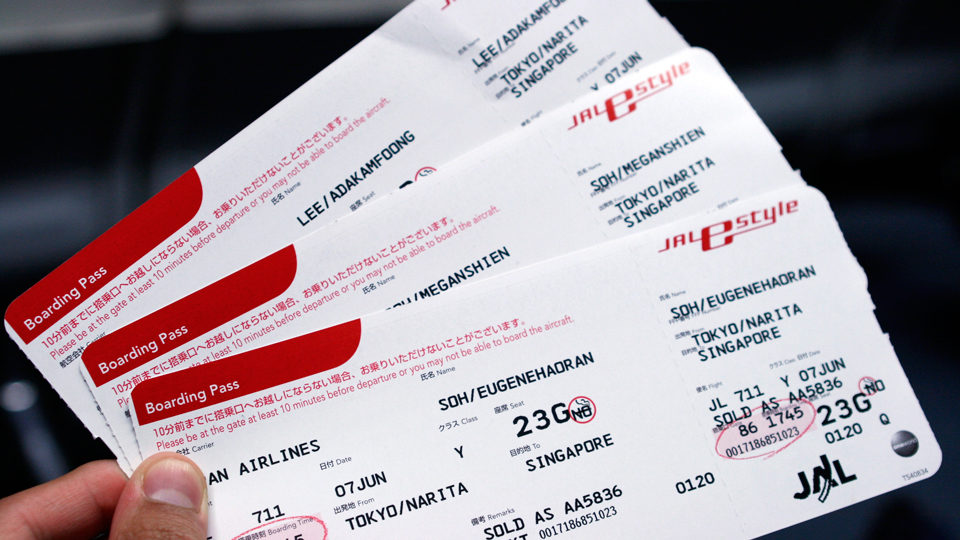 Much as I'd like to think I could freewheel it around in the UK, getting sent back to the country I just flew from doesn't top my list of "having a good time."

Surprise—not surprise! There are countries out there that aren't simply interested in hosting, or taking on travelers that simply can't pay their own way, well, out. Meaning, certain countries won't admit travelers into their borders without further proof of onward travel,  thus creating an interesting conundrum for travelers that perhaps are just a little too, aha, free-spirited, and have trouble committing to an end date for their trip.

Though there aren't exactly a ton of options for showing proof of onward travel (sans a ticket out the country, ahem), there is more than one creative way to get around this loophole for either a substantially minimal fee or for free.

It's pretty much recommended to take care of proof of onward travel before leaving for the airport, since airlines usually bear the brunt of the burden—and cost—for shuttling someone back to their originating country. Therefore, most airlines will act as the gatekeepers, and can choose to not let a passenger board in the first place.

Besides, I'm pretty sure running around an airport terminal with a shitty data or Internet connection trying to book an onward flight at the last minute while an immigration officer stares you down is not anyone's idea of fun.

(In fact, it seems like my idea of stress, pointed out for an extra dose of sarcasm.)

Reportedly, countries that require proof of onward travel include the following (subject to verification, and is definitely not limited to):

Book a future flight, then get it refunded. 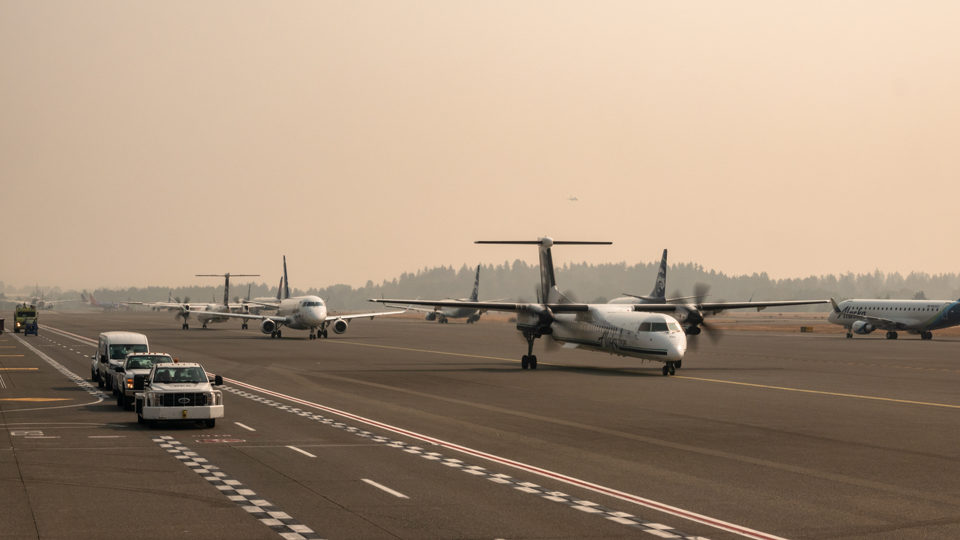 There's good news here if immigration requires proof of onward travel in the U.S.: All airlines departing from the U.S. are required by the Department of Transportation to offer a free 24-hour cancellation or hold.

For flights departing outside the U.S., Expedia.com offers free 24-hour cancellation for most major airlines. It is a relatively unknown trick exclusive to the American version of the website; other travelers have reported good success using this method. In other words, this would even work for a flight leaving from Bali to Sydney.

Budget airlines don't seem to really qualify for this cancellation, but generally speaking, there is enough flight selection that it would be hard not to find a flight that did fall under these guidelines for the purposes of showing proof.

The other option is buying a fully refundable ticket (booking into Y class; business- or first-class tickets also work) on any airline and then getting it refunded post-immigration. It is generally not recommended to do this with frequent flyer points, since most award flights might incur a redeposit fee.

The trick here is to buy the ticket as close to the flight departure as possible: For instance, it would make no sense to buy a ticket that has a 24-hour cancellation window, only to be in transit and arrive at immigration 27 hours later.

Guess what's not getting refunded? That ticket.

Rent a ticket for a small fee (seriously).

There are a few services that allow travelers to "rent" a ticket for a small fee. These agencies essentially provide a flight confirmation for a traveler to use (either for visa or proof on onward travel purposes) for a certain amount of time before canceling the flight. Presumably, they take advantage of the loopholes within existing airline fares in order to do this.

Most noticeably, the ones that get brought up a lot in traveling circles are BestOnwardTicket, OneWayFly, and Rent a Ticket (which seems to get horrible reviews, so buyer beware).

OneWayFly is a service that provides an proof of onward travel for two weeks, making it ideal for long visa application processes and long transit times. It also seems to be the most highly vouched for.

In the sample example, looking for proof of onward travel from the UK, the cost was €19 ($18.41 USD). It does allow the traveler to specify a particular destination, if that is something that is needed.

This is often the cheapest way to sacrifice only a few bucks, and can be cheaper than renting a ticket. Our primary strategy here would be to book a bus ticket from somewhere close to the country border, into another country. That's proof of onward travel!

Remember, the date of the actual bus ticket doesn't actually matter—unless you actually plan on taking it—and it's worth searching several times within the visa-free window to get the cheapest price.

Using Busbud, a bus search engine aggregator, we searched on a couple of random dates until we landed on a bus ticket out from London to Paris on Eurolines for $17 USD.

Short of using a possibly sketchy flight rental company, this may be the most surefire, legit way to go. 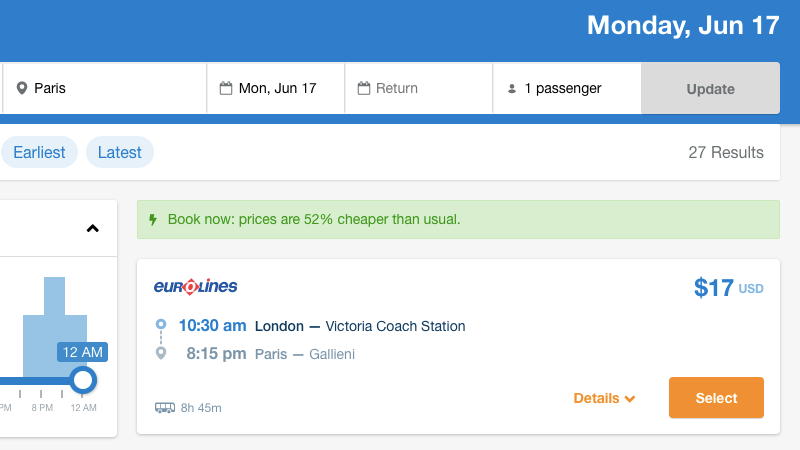 Booking a quick bus ticket out of the country.

I mean, if you plan on taking it, all problems solved. 😁 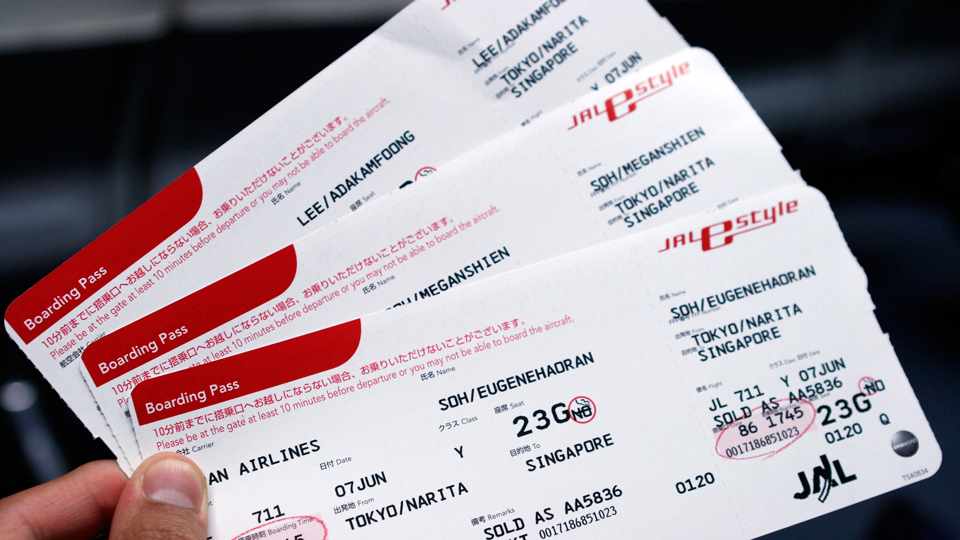