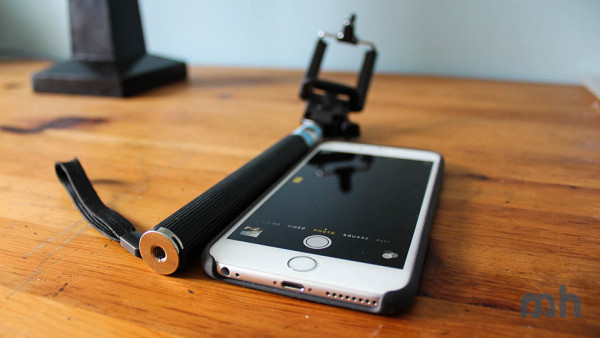 Come on, it's time to stop hating. You know you want to! If you can’t fight them then join them, right?

That's why it was time to go hard or go home and to take matters into our own hands, er, stick. The SnapandGo Selfie Stick retails for $24.99, about the going rate for other smartphone poles on Amazon, but the company sent us a complimentary unit to review. The only other stick I’ve held before was GoPro's GoPole which definitely is a stronger, more durable and professional product. It's also double the price. But since I don't plan to be surfboard-chic, go slalom skiing or jump out of a plane, it made no sense. I was just looking for something to use with my iPhone. The latter would have definitely been overkill.

Selfie sticks come in all shapes and sizes with all sorts of bells and whistles; some even come Bluetooth-enabled with remotes. The SnapandGo, however, relies on the phone's automatic timer to take any photos — meaning you have to click the timer button on your phone, then quickly jut the pole out to be in the position you want. So to be clear, this particular model is an over-glorified tripod. It doesn't do anything fancy; there are no timers. For $25, there probably should be something more to it. Most all the other ones retailing at that price point are equipped with Bluetooth shutter buttons.

The main selling point with the SnapandGo stick, which is made from aluminum alloy, is that when it's fully extended adds an full arm’s length. Unless you’re Michael Phelps-size though, it’ll, be a bit longer, because it’s a full 42 inches (106.7 cm) in length. Folded up, it measures 8 inches (20.3 cm) long, making it quite purse-stashable. Extending the pole shorter and longer takes a little bit of muscle effort—I would like it to slide more easily—but I found that it stayed securely in place at whatever length I wanted to use it at.

Updated: April 4, 2017The SnapandGo stick finally snapped after being stashed in a bag with an undue amount of pressure on the device. On the hunt for another one!

It has a handle about 6.5 inches (16.5 cm) long made out of ridged silicon rubber, which makes it easy to grip. Attached to the handle is a wristband. The clip where the smartphone goes is made from plastic and rubber and is slightly smaller than the width of an iPhone 5, and when the tab on the clip is pulled it extends with springs, which also are what secure it snugly around the phone. Though it look like it couldn't take an iPhone 6S, it managed to adjust just fine.The base of the clip is padded with foam, which also adds some stick between the base and the phone. 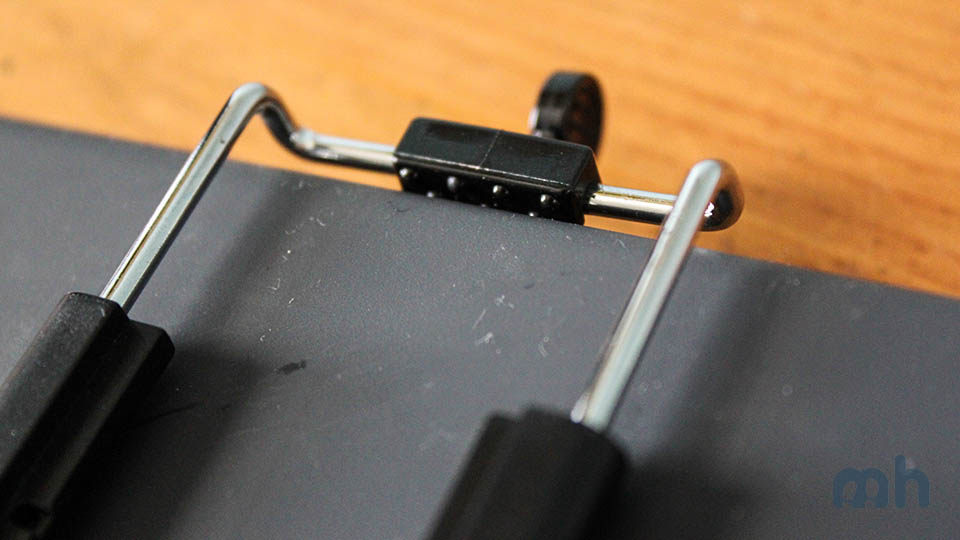 An iPhone 6S tucked snugly in the tab, ready for use.

So, those are all the essential moving parts. In total, the pole weighs 17.63 ounces (500 g). To give some context: This loaf of Sunbeam sliced sandwich bread weighs slightly more (67 grams more) than the selfie stick. It is still, however, substantially heavier than this Mpow iSnap Pro, one of the better and cheaper selling selfie sticks on Amazon, which weighs in at 4.8 ounces (136 g).

Still, its compact size and weight was still easy enough to throw in my bag and take around when sightseeing, which was a huge plus. I hardly had to factor in extra space or, quite literally, weigh whether I wanted to take it with me. But because the SnapandGo Selfie Stick is so small and light, I never thought twice about whether I wanted to bring it. I always brought it.

In order for the stick to pack up compactly the pole is thinner at the top and wider at the base. Fully extended, I feared it might be too flimsy to support my iPhone, but it always held it strong and the pole never felt like it was bending. I think those nerves came from never having used the stick before myself and from photographing in places where my phone could easily be lost forever should it fall — like into a waterfall. I never really used the wristband but I could have and should have if I feared dropping the stick.

But, lo and behold, off to Brazil I was! As it turned out, the selfie stick was everywhere. Everywhere! I mean, knock-off versions were being sold on blankets on the sidewalk and peddled by touts in the middle of the street. (If that’s not a sign selfie sticks are here to stay, then I don’t know what is. Brazilians are also a prime market for the go-go-gadget poles, so there was definitely no judgment there.)

In Brazil, the selfie stick managed to get more of the background than a standard shot would have, whether it was the panoramas of Rio de Janeiro’s beaches, mountains dotted with Carioca homes or the plummeting cascades of Iguazu Falls. Being able to capture all that grandeur surrounding me was pretty dang cool and all possible because, well, I was using a selfie stick. Since I tried to be mindful of using it with discretion, I’m pretty sure I didn’t do it at the expense of annoying anyone else.

Still, I was hesitant to whip out the selfie stick and use it to be honest, not just for shame. I know this sounds a bit ridiculous, but I didn’t really know how to use one at first. Yes, I understood the basics, but pivoting the clip took some getting used to. In fact, I actually unscrewed the entire clip from the stick itself the first time I was trying to set myself up. (I think they keep the pieces separate so the clip also could be attached to a tripod.)

The clip itself can rotate 360 degrees and when secured on the pole, moves 180 degrees front-to-back in 10-degree increments. (Depending on how it’s held can be seen as 180 degrees side-to-side.) So, unlike the pole length, which can be adjusted, the degrees at which the actual smartphone can be angled on the stick are limited. I found that this wasn’t too limiting because I could just, ya know, adjust accordingly the height or angle of my human arm holding the stick and take a selfie the old-fashioned way. 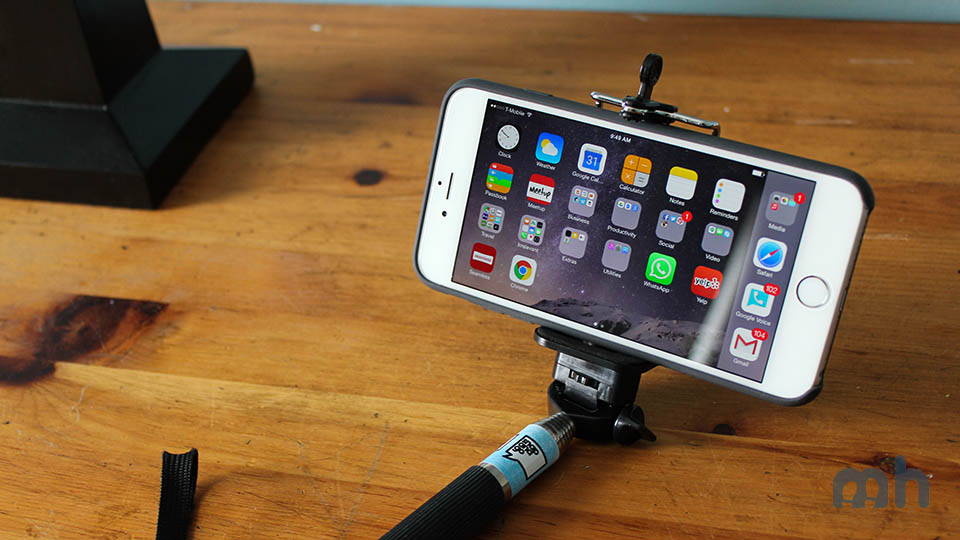 Who’s ready for their closeup?

But let's backtrack for a second. That’s one issue I had with the product: the wheel that keeps the clip attached to the pole (and can be used to tighten or loosen it). Every time I picked up or pulled it out of my bag, it seems to have become undone. I found I always had to tighten it up again. It’s now the first thing I check when I use it to make sure I don't end up accidentally dropping my phone. Not only is this a bit annoying, but because it always feels like it's about to unscrew it kind of makes the product feel cheap.

More or less, the SnapAndGo selfie stick has found a place in my bag because it's so lightweight and compact. I often end up taking it with me when I'm touristing around because why not? But for $25 it really should come with more high-tech extras, like a Bluetooth-enabled remote. Because if you're going to have a selfie stick, you might as well go all out. For now, we'll pass on this selfie stick but that doesn't mean you should pass on all selfie sticks. Embrace it.

For some context: The selfie stick actually was named the “holiday gift of the year” this past season and we actually included it in our best picks for travel gear. Cause.

Expensive for a selfie stick. There are undoubtedly better and cheaper ones on the market that include useful features like remote shutter. But FIVE STARS to having a selfie stick!