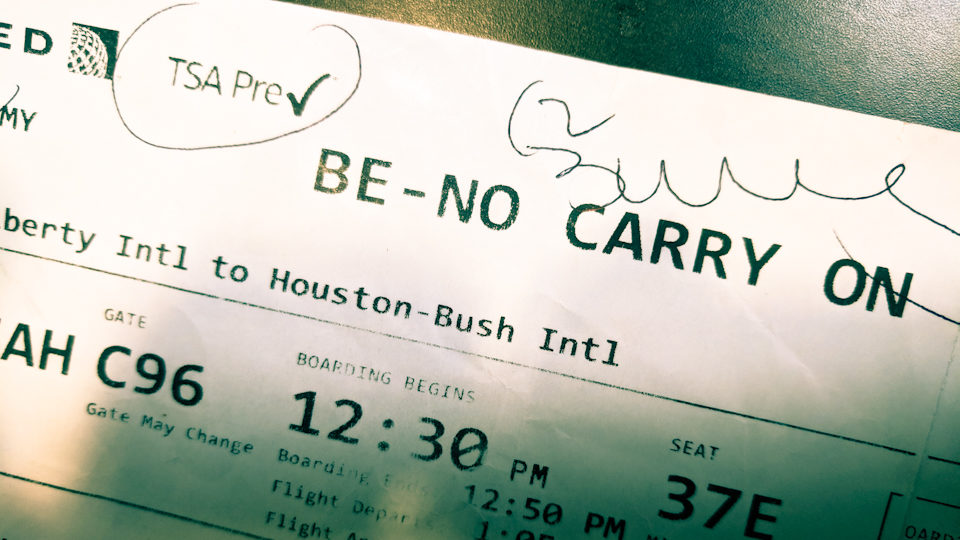 Dial those expectations back. Set them back at "paying for water," and that will leave you in a good position to be pleasantly surprised, for instance, if you don't have to pay for water.

The term "basic economy" seems to be an ever-evolving concept these days. American Airlines recently began allowing carry on bags again, and JetBlue announced it will eventually introduce its own version, but will include a carry on bag. (These days, it seems "basic economy" is defined as no seat selection, which is already a thing, no changes and no boarding.)

But, here's what it's really like to fly at the extreme bottom of the barrel, and how to survive with no carry-on bag. If you really have to, if you're an efficient packer, and if flying United, Frontier or Spirit. (I have long purged "RyanAir" from my lexicon.)

Looking at one airline here in particular. 🤧

Taking efficient packing to the extreme.

How much is it possible to cram in a personal item? In fact, realistically, for trips that last one to three days, this shouldn't be a hard task to accomplish. Unless you're violating some universal law of packing light.

There is only one true workaround for getting around the no carry-on rule without paying the fee: It all must fit in a personal item, which also must fit underneath a seat.

To also take that away, well, it seems borderline illegal.

Because I've had some experience either channeling my inner Marie Kondo, or I've been forced to economize ultra-limited spaces for years, this was not an issue.

Packing efficiently is 85% of the basic economy battle. In fact, it's an art, which is why we have created a detailed guide on how to pack everything inside a personal item.

Really, for quick weekend getaways, it shouldn't be difficult because 1) you're already wearing a set of clothing for one day 2) the toiletry base doesn't really change, and 3) the only variable factor is the clothes. Find the smallest packing cube available, stuff it full of clothes, and throw it in a big-enough personal item (somewhere between 18-25 liters), and voilà.

Checking in online.. or not.

One of the things that United's basic economy fare doesn't tell you upfront is that should you choose to accept your fate and choose to bring no carry-on, the airline will not let you check in online. Instead, travelers must check in at the airport with a verified United representative.

Basically, the airline wants to make sure no carry-on bag is going to escape their wandering eyes and make it sneakily onto to the plane. My bag passed with no problems, but talk about penalizing efficient packers there.

The checking in online situation also presented two other problems: It didn't allow me to see the boarding time, so I had to call in and check that. There is also no way confirm TSA PreCheck status, though I've reliably gotten that over the past five years. (I did receive that, in the end.)

It means also I had to account for time standing in line at the airport.

The fact that no carry on is allowed is stamped on the boarding pass.

Jokes aside, it looks like this. The only people that really care are the gate agents, and I'm sure they probably care about other things (like getting the plane out on time) more than the fact that omg, there is a carry on bag! 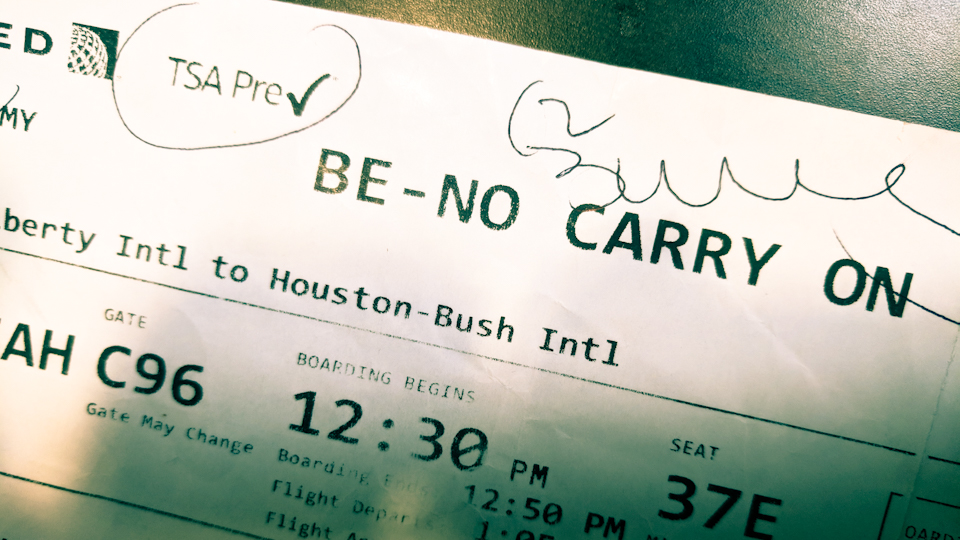 Get a special boarding group, you're that special.

Yes, the seat is still somewhere near the back of the bus, but passengers that *do not buy* a carry on bag do get their very own special boarding group. In case if it's not clear, it's the very last one.

Let me iterate that again, it's a special boarding group created for people who didn't pay the carry-on bag fee.1 It's called Boarding Group 5, and it comprised of me and one other person. So two people total.

The other person had a backpack; we shared a few laughs, mentioned the term "third-world airline" a couple of times and boarded the plane without incident.

Aside from having to pack efficiently, expect that online check in won't be available, to deal with carry-on police at the airport, have your boarding pass flagged, and to get a special boarding group all to yourself.

But you know, it is survivable; packing efficiently is 85% of the battle.