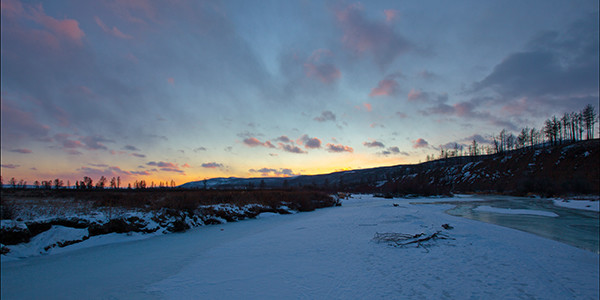 Standing in the border post’s sun-devouring shadow, it’s easy to see why the border can’t be crossed on foot. It’d take hours. The boundary between the two nations is a vast no-man’s land, a sweep of unmolested grassland stretching from one end of the sky to the other.

It’s an impressively jerry-rigged system the Mongolians have set up. A hole in the fence gets you into the border post. Once you’re past customs, a makeshift shuttle system gets you across the border. Mongolians moving through the border post on foot come out the back door, and then wait next to the vehicle lane for jeeps hauling loads through the crossing.

“Jeep” is more an approximation; “metal boxes on wheels” would be closer to the mark. Their interiors are gutted, the consoles, seats, upholstery all discarded like last year’s Christmas tree. I can even see the jeep’s exposed metal floor. What used to be the insides of a passenger vehicle is now only a driver, stacked boxes, and—crammed into a space that would be tight for three people—six passengers. Up at the very front of the jeep is a bento box of open air between the front-most Mongolian and the dashboard; and this is where I am expected to wedge myself.

I offer up what I hope is a solid “you’ve got to be kidding me” expression. My attempt to point out the insoluble spatial nature of the problem at hand—namely, that I am neither the size nor the shape of a cocker spaniel—is rebuffed by seven pairs of expectant eyes. “We get it, you’re tall,” they seem to say. “Now get your ass in the jeep so we can go home.” In the back of the jeep, Scrub and Tall One fidget in agreement. 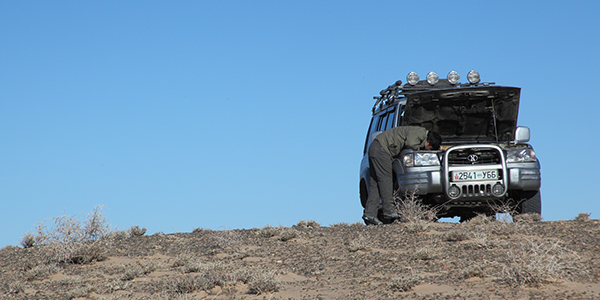 At least this guy isn't stuffed in with seven other people. Einar Fredriksen / Flickr

Five minutes and several choruses of grunts later, the jeep rolls out towards Mongolia. My face is pressed up against the windshield and my hand grips the door to keep it from flying wide open. It’s a tight squeeze inside the jeep, but rather than feeling confined, I feel freed. Improbably, incredibly, this cash-poor, frozen-footed fool of a translator is finally rolling out under Mongolian skies.

The passage into Mongolia is uneventful. A border post, a small trading town, a few hours’ wait to cross back into China. The driver picks up a new load of humans for the journey back. Mercifully, there’s no other cargo this time around.

The sun is yellowing as we join the line of cars waiting to get back across the border. Next to me an older Mongolian woman in an ushanka struggles to fill out the entry form for Chinese customs. It’s written in Chinese and English, neither of which she can read nor write. I help her fill out “Country of Origin,” scratching out “MONGOLIA” in big block letters.

A motion from one of my fellow passengers pulls me out of my thoughts as I start filling out my own immigration form. He’s pointing at my American passport. I look at him. He gives me a broad smile and a thumbs-up, and then proceeds to blow my mind.

I am slightly agog. The global afterglow of Barack Obama’s election is just starting to fade. I mean, its 2010. To be complemented on his immediate predecessor smack in the middle of deepest, darkest Asia is…unexpected.

The smile on the face of my new Mongolian friend gets a little bigger, the thumbs-up a little more emphatic. Faster than my conscious mind can process, images pop into my brain: Donald Rumsfeld, a horse, Saddam Hussein. Suddenly I realize what’s going on. I’m the unintended beneficiary of one of the weirder geopolitical marriages in recent times: on one side, the U.S. rounding up allies for its coalition of the willing in Iraq, and Mongolia, on the other hand, seeking a willing partner in a never-ending dance between its giant neighbors.

In return for something (the Wikipedia page on “Mongolia-United States relations doesn’t make it totally clear what), Mongolia sent a few hundred troops to Iraq. A couple years later, Donald Rumsfeld showed up for a few hours in Ulan Bator, where local officials consummated the marriage by giving him a horse (which he promptly named ‘Montana’). During this torrid romance, W. became all the rage in Mongolia. 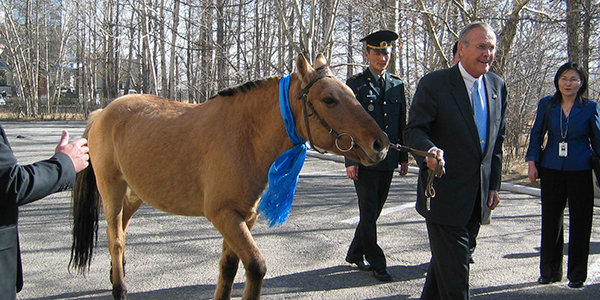 A shift in the mood inside the jeep refocuses my attention out the front windshield. A Mongolian border guard is sauntering towards our vehicle. On cue, all the other passengers whip out their passports and flip to a page inside. It’s clear they’re getting ready for an inspection.

I dig for my passport and start to flip frantically through the pages. Is it really possible that I’ve come this far just to get held up at the very last step? In the space of a few seconds, I go from serene to something close to complete panic.

As my mini-implosion progresses, the other passengers hand their passports to the border guard for inspection. One by one, the guard looks them over. And then it’s my turn. “Deer in headlights” doesn’t even begin to do justice to how I must have looked. “Baby otter in headlights” was more like it.

For a moment, everyone freezes. Then a hearty chuckle goes up from the Mongolians. I meekly comply, giving the border guard my passport. He gives the cover a casual inspection, and passes it back. Then he grins—a real grin, broad and friendly—and raises his hand in the 21st century’s universal gesture of peace and understanding: the thumbs-up. He speaks two words:

And then he waves us through. 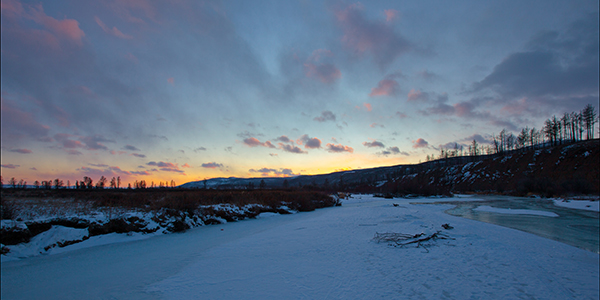