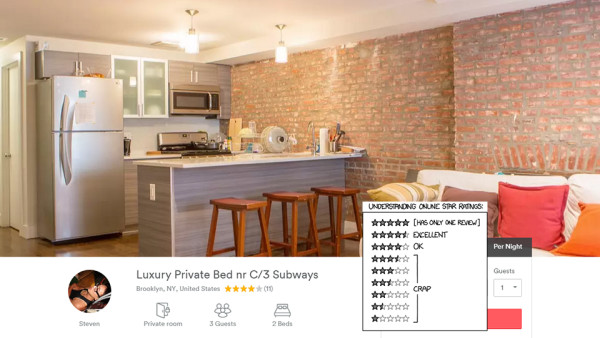 Ever met a perfectly pleasant stranger and then you were asked to critique their communication, habits and home? That’s essentially what leaving an Airbnb review is like.

Though there’s a lot of wonderful hype about Airbnb, there are tons of pitfalls to using the service, including its lack of privacy, poor consistency and the fact that there are some pretty terrible people out there — guests and hosts included. And unfortunately, this all gets swept under the rug because it’s really hard to put down someone after you’ve met them face to face. More than anything else, it all boils down to the fact that people just hate giving bad feedback directly to people, and that's why its often best to take Airbnb reviews with a grain of salt. A big grain of salt.

Fundamentally, at its core, Airbnb is the marriage of two preexisting concepts, a lovechild spawned between CouchSurfing and traditional vacation rentals, born into life by Brian Chesky, Joe Gebbia, Nathan Blecharczyk back in 2008. Like Uber and Lyft, the company fundamentally acts a third-party broker between its community. There's a new reciprocal relationship in town where hosts can affect guests and vice versa, in equal footing that wasn't there before. And it’s an interesting relationship in which I’ve certainly played my part in, as both host and guest since 2011.

That's because in the new “sharing” economy (let’s be real, it’s still transactional), two-, three-, or four-star reviews are essentially dead. Reviews are either “awesome!” or horrible. Got something lukewarm to say? Don’t be surprised if that's perceived as completely negative. Courtesy now dictates behavior and guests/hosts will often refrain from leaving a critiqued review unless it was just truly, truly an awful experience. Minor issues get glossed over. And that’s unfortunate, because, like in many review systems, it’s the three- and four- star reviews that are often the most objective.

For better or for worse, social niceties are getting in the way. Rarebit CEO Hampton Catlin illustrates this best when he posted on a blog about his own Airbnb experience:

In fact, we’re currently struggling with this feeling with the AirBnB we’re currently in. It’s slightly dirty, has a loud workshop next door that wakes us up with banging on the wall, has a bathroom that is very hard to get to from the bedroom, and, above all, was pricey! But we met the owner. He seems nice. The place is pretty large. The internet is fast. Plus, he keeps asking if everything is okay and we don’t want to seem like complainers. He’s been really apologetic about the issues in the place but hasn’t really done anything…

The issue is that for most people, it’s against our nature to say bad things about people we just met. It stresses us out and makes us unhappy. So we find it far easier to say “everything’s fine” than “your house isn’t very nice.”

In a world where bad reviews can influence future earnings or the ability to save some money, both hosts/guests will err on keeping the peace in cause of the greater good. Quora and Airbnb user Gillis Danielsen further chimes in on the subject, pointing out his own observations:

Read Quote of Gillis Danielsen's answer to Why are there so few negative reviews on Airbnb? on Quora

This essentially skews the numbers, creating a weird five-star halo effect.1 If everyone essentially chooses to abstain from reviewing mediocre places, then the system is not accurate. If there are eight five-star reviews but 20 people can’t be bothered to leave three-star reviews, than the real average for a property would be 3.5 stars. But that’s not what you would see, at all.

Airbnb even subtly acknowledges this, requiring Airbnb SuperHosts to receive a review from a guest at least 50% of the time.

It also doesn’t help that when Airbnb first initially launched, reviews between hosts and guests were published instantly, thus setting the tone. Since Airbnb participation relies on strong reviews, it was detrimental to leave a negative review—no matter how honest they were—for fear of retribution and getting embroiled in a “he said, she said” conflict. And let’s be honest, no matter who is right in that particular argument, a winner rarely emerges from the fray. The old adage thus prevailed: “If you have nothing nice to say, don’t say it.”

It wasn’t until last year—a full six years after the company’s inception—that Airbnb took serious steps to rectify the issue, during its branding relaunch. The site finally changed the way the review system operated: reviews could only be seen once the other party had also completed their review. Both parties have a 14-day window to complete their assessment; if the other party fails to leave a review, then the other review is published at the end of this window. But even with the change, it can still be hard for a peacock to change colors, especially if you’ve grown up under the old system. And in a growing startup, six years is a virtual lifetime.

Unfortunately, even with these changes it’s not enough. The company furthered altered their review policy to let hosts and guests leave both public and private feedback simultaneously. While it lets hosts/guests see what can be improved upon during the experience, it significantly minimizes the amount of public negative feedback. Both hosts and guests feel freer to comment honestly, but the thing is that it all happens behind closed doors with no accountability that the issue will be fixed in the future. There is no transparency for future host/guests, who are forking over their cash or their home.

Even though Airbnb has a valid interest in trying to police their community so that there are no bad eggs, Airbnb has a financially vested interest to at least ensure satisfaction levels appear to be high. Unlike most review sites, it should not be forgotten that Airbnb takes a decent chunk of fees (a healthy 6-12% depending on the cost of the total reservation) out for every transaction made. These fees make up a huge portion of their estimated annual $250 million profit in 2013.

(Compare that to Yelp and TripAdvisor, who don’t necessarily have financial interests in every single property featured on their site. TripAdvisor does review FlipKey, another vacation rental site they own, but the problems with TripAdvisor are well-documented).

One anonymous Quora user has pointed out that Airbnb does not, in fact, leave its reviews alone. In fact, he notices that the site has had a tendency to hide its reviews to further its own goals:

Read Quote of Anonymous' answer to Why are there so few negative reviews on Airbnb? on Quora

Frankly, that’s disturbing. Especially when travelers are paying hundreds of dollars for a decent roof under their head that may make or break their trip experience. To clarify Airbnb’s position, I emailed them regarding the removal of negative reviews, asking in particular, why that Quora user may have had the experience that they did.

Their spokeswoman redirected me back to their official review guidelines:

Airbnb’s default position is not to censor, edit or delete reviews. However, there are rare cases in which we may take the extraordinary step of disallowing or removing reviews or review responses. We reserve the right to remove reviews that violate review guidelines.

At least there seems to be a better system set up for honesty on other sites, where users can post their own pictures, where business owners can offer their responses, and there are no adverse effects to users posting honest opinions. In truth, those systems punish property owners more than it punishes travelers.

That system creates a pro-consumer culture where property owners have to maintain a level of consistency. And Airbnb’s main flaw is that hosts have varying degrees of professionalism and understanding that it’s a business transaction. The experience is completely variable. Unfortunately, this particularl system also doesn’t account for someone who might come in and wreck your home, too. While it might not be the particularly best system for Airbnb, there is also more honesty on one side of the coin.

Perhaps the best thing for Airbnb to do is to keep the policy as is but without notifying either host or guest that a review has happened on either side. Most hosts and guests can generally sense whether a lukewarm review is imminent, so it’s possible to game the 14-day window by waiting till the very end or waiting for other positive reviews to deflect a negative or lukewarm review. Another option? Hide the names of users/hosts for their written and starred reviews to keep it less personal. That would simplify things.

So how do you tell someone who you’ve seen in their jammies that their place might be a bit a dump after coming into their home? After they went out of the way to make coffee? Or how to ask your guest not to eat your food while they’re dumping milk into their bowl without being an asshole? I’m still trying to figure that one out. 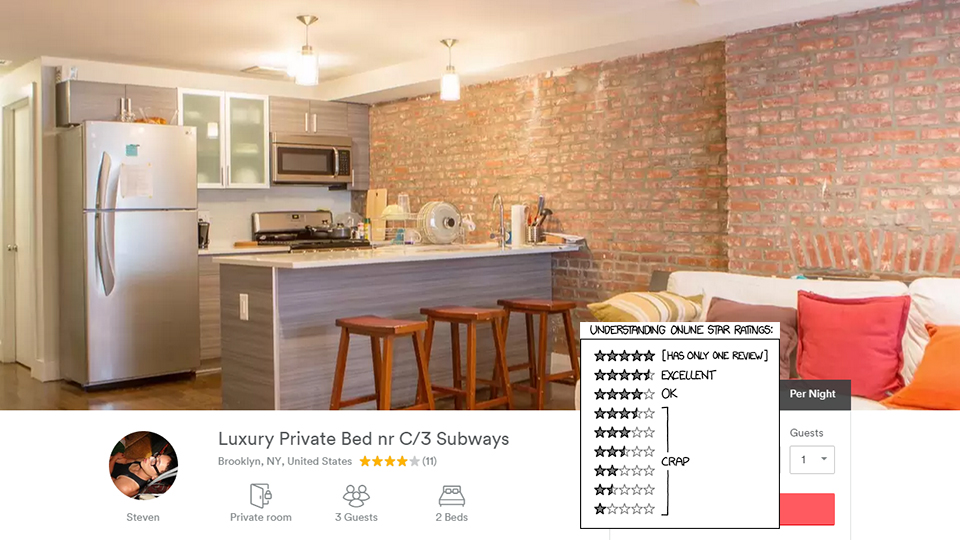