A travel iron isn’t really necessary unless you travel for business. There are still times, gasp, that I need to look like I just haven’t rolled out of bed and popped over to my kitchen table.

Maybe I’m just rolling my clothes wrong, but my clothes never end up completely wrinkle-free when I arrive at my destination. Certainly, there are less wrinkles. But wrinkle-free? Meh. It definitely just wasn’t going to cut it at a business function I had to attend in Toronto a couple of weeks ago.

Alas, I happened to have a small little Sunbeam travel iron I had just bought a couple of months before. The Sunbeam GCSBTR-100 is pretty much the cheapest travel iron at just $13 on Amazon, about $7 cheaper than the slightly better-rated SteamFast travel iron. In the end, I opted for the Sunbeam because it was more reasonably priced even though each iron is pretty similar in size. (If pure portability is what you’re after, the mini SteamFast iron seems to be a tad smaller and lighter — but just barely.)

It’s good to keep your expectations in check here. The Sunbeam isn’t exactly the fanciest iron with just three heat settings, but it does have a steaming function. The iron also has two voltage settings, 120V and 240V, which make it ideal for bringing along with on trips that require some overseas travel. There, however, is no auto shut-off, which seems pretty fancy schmancy for such a cheap iron — none of the other options we looked had this feature either.

Now I’ve always said that when it comes to traveling, it’s all about getting away with the smallest footprint you possibly can. While that’s true about 99% of the time, sometimes there is such as a thing as too small. And it would just seem that an iron—something that pretty much relies on the surface space it can cover—would just be one of those things that better as the exception than the rule. It’s just better for efficiency. And for ironing my clothes a lot faster. Which is why I willingly broke my rule and got a slightly larger iron than the smallest one available.

The actual iron itself measures in at approximately 6 1/2 in (16.51 cm) x 3 in (8.89 cm) x 3 ¼ in (8.255 cm); to give you an idea of this actually measures out in real-world proportions, the length of the iron basically runs just as long as a Kindle Paperwhite does, making it still fairly compact in comparison to a full-sized iron. Perhaps its biggest drawback is that it weighs in at 1.3 pounds, which is still a bit hefty for a travel gadget. However, the upside of its slightly larger size is that you would end up getting more surface coverage on your clothes per press. The Sunbeam is also at the right size where it can easily replace a full iron at home while not being too cumbersome to bring on a trip.

On the times that I busted out the Sunbeam to work its little magic, I generally had no complaints. It heated up quickly, often within a few minutes, and did a good job of ironing out the kinks and wrinkles in my clothes. For those who are looking to use it as a steam iron, the non-stick soleplate has about seven holes plugged into it. I can’t purport to be an expert here since I never really steam my clothes, but hey, the function’s there. While steaming seems like it could be hit or miss, it’s possible that the best way to get the job done is to utilize this feature only when the iron is set on maximum heat. 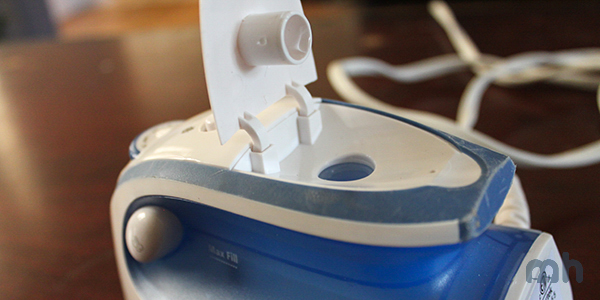 The best part about the iron is that its lack of measuring cup meant I had to deal with and worry about one less moving part — a godsend on any trip. Water is filled directly into the iron, with a demarcation line to tell you in when you’ve put in too much. While there seemed to be quite a few complaints on Amazon about water leakage when the iron was set on its end, I didn’t really have any problems. Besides, it would also seem like a good idea to empty the iron of any water before you travel with it. After all, there’s nothing more fun than wet clothes and exploding shampoo!

The iron also doesn’t come with its own carrying case, which could be a positive or negative depending on your preferences. This didn’t particularly bother me because first, you wouldn’t store an iron immediately while it’s blazing hot and, while nice to have, doesn’t seem terribly important. Actually, the biggest gripe I have with the iron itself is that it can be difficult to keep the cord securely fastened so it’s not messy to deal with. (Wrapping the cord around the handle seems to do a good job of making it packable. It’s only when I pull it out of the suitcase that the wires can get a little haywire.)

In the meantime, I’m not currently traveling—at least for another few weeks—and it’s doing a fantastic job as my main iron to keep me looking presentable. Now all I have to do is trick someone into doing my ironing for me.