I saw the movie once a couple of years ago and all I can remember thinking was how much Zooey Deschanel annoyed me. Thank god that even she couldn’t ruin the spirit of Douglas Adams’ The Hitchhiker’s Guide to the Galaxy for me.

Amid all the muck, there’s a whole host of fantastic travel literature and writers out there. Bill Bryson comes to mind as one of the greats; so does Matt Gross, who used to write The Frugal Traveler column for The New York Times. But so far, it seems like no one has been able to take their readers on a real journey like Douglas Adams can.

Why did you pick this book?

I was bookworm extraordinaire as a kid and a corresponding English major in college but for some reason, it was a book I just never got around to reading. My literary tastes have become more refined over the years, though, so I was actually a bit worried about being disappointed by Hitchhiker’s. If it’s anything I’ve learned over the years, it’s that the eight-year-old critic in me wasn’t actually all that good.

(I once asked my roommate what she thought about reading Anne Frank’s diary for the first time as an adult; she just shrugged in response, “I mean, I guess the writing’s just okay, for some reason I’d thought it’d be better…. well, I guess she was just a teenager.”)

The simple truth is that interstellar distances will not fit into the human imagination….For light to reach the other side of the Galaxy, for it to reach Damogram, for instance, takes rather longer: five hundred thousand years. The record for hitchhiking this distance is just under five years, but you don’t get to see much on the way.

The story goes that, as an eighteen-year-old, Adams was hitchhiking his way across Europe with a copy of the Hitch-hiker’s Guide to Europe that he had just stolen. Europe on $5 a Day was apparently out of the question. So he was lying on a field in Innsbruck, Austria one night, penniless, when he stared up at the stars, and thought by golly, someone should really write The Hitchhiker’s Guide to the Galaxy.

He forgot about it until a couple of years later down the line but basically it was inspired by abject poverty like a true starving artist, which makes me feel a little bit better about eating instant noodles right now.

The story covers the journey of Arthur Dent, a simple Earthling, and Ford Prefect, his strange “human”-turned-alien friend. Along the way, they team up with another alien and Earthling combo whose names go by Zaphod Beeblebrox and Trillian (Tricia McMillian). Together, they end up on the seemingly mythical and ancient planet of Magrathea. It’s there that everything is called into question, including the rather unorthodox beginnings of Earth itself.

In other words, Arthur Dent is essentially what I would call a traveling noob and Ford Prefect is the experienced friend that pretty much makes sure Arthur doesn’t get robbed by an elephant in Bangkok at three in the morning. Hitchhiker holds up amazingly well, partially because it’s so fantastical and abstract that it’s hard to hold real-life current events against it. At the same time, there is always a character to identify with, whether that’s Dent or Prefect, since they represent such vastly different mentalities during their adventure. Prefect is the guide who’s seen it all while Arthur sees the magic (or panic) in everything because of his naïvete. In many ways, they’re the perfect duo of perspective.

Of all the planets in all the star systems of all the Galaxy—many wild and exotic, seething with life—didn’t he just have to turn up at a dump like this after fifteen years of being a castaway?… [Ford] stopped and picked up a cold clod of earth, but there was nothing underneath it worth crossing thousands of light-years to look at.

“No,” insisted Arthur, “don’t you understand, this is the first time I’ve actually stood on the surface of another planet … a whole alien world…!” 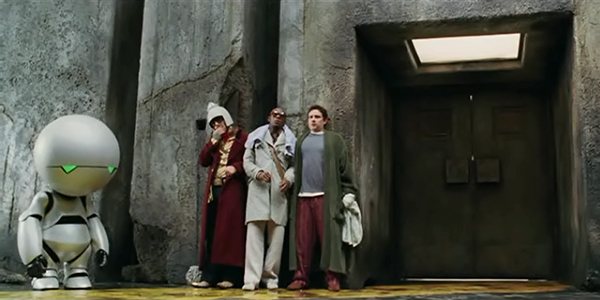 A Zooey-less scene from the movie. Yay.

Describe the significance and symbolism of this story.

The plot is hardly the point in Hitchhiker. It is a ridiculous, funny, serious, philosophical and grounded story, much like real life. Adams frequently takes unexpected diversions, much like that random German friend you just met who unabatedly insists exploring that canyon off the side of the paved road. It’s easy to see that he takes the same exact spirit of traveling to his writing: why not? It’s an inspired piece that embraces the unknown and, this is important, totally makes it up as you go along.

Of course, it still has all the elements of a typical bildungsroman for Arthur. There’s one particular moment where things look particularly bad (rockets-flying-at-you kind of bad) where Arthur finally finds his voice. After a seriously lengthy interchange between everyone else onboard, he finally declares as a bystander:

“I can’t [pilot the ship] either,” said Arthur, who felt it was time he began to assert himself.

It’s hilarious because it seems like a particularly useless moment but it’s actually not. Arthur is literally forced out of his comfort zone and is forced to reaffirm and solidify a personal boundary he already knows he has. In this sense, he becomes more secure in his identity, whether that’s as a bumbling Earthling or as an idiot abroad.

What is your conclusion?

Though I feel like I’d probably get along more with Ford and we could talk about the importance of towels ad infinitum, it’s really Arthur’s perspective that puts things in place. Traveling is a bit like eating pizza for me. Most people love melted cheese on top of bread, but chances are, if you eat it enough, it’s easy to start getting tired of it. Then after a while, you may even start craving pork dumplings or melted popsicle fairy soup. The enthusiasm begins to wear off and, before you know it, all the different types of pizzas sort of end up looking and tasting the same. It becomes hard to remember what made it special in the first place. (Cheese.)

In that same vein, Hitchhiker could just be another topping. But it’s such an inspired accoutrement that it’s impossible not to laugh at Arthur’s childish antics. I often keep traveling, sometimes, in search of those fresh eyes and because life is just too short to not be amused by it. In the words of Martin Freeman, who played Arthur Dent in the 2005 movie remake, there aren’t many stories left like this about finding the personal and the ridiculous in the universal.