The HotelTonight premise is simple. Mobile users can book empty hotels rooms at the very last minute for awesome savings, which to me is either profoundly brilliant or insane. But how much do you actually save?

To ensure accurate results, I decided to track one hotel in Portland, Maine—the Breakwater Inn & Spa—on HotelTonight for two weeks this summer, during the peak of the sleepy Northeast state’s tourist season. HotelTonight managed to consistently beat every last-minute rate we found for that night, every night, but not at a big price differential as you think there would be. In general, HotelTonight’s savings averaged around $43.08 off the lowest possible last-minute deal I could find online.

If you’re familiar with Jetsetter, it’s a hotel booking site that features flash sales of boutique hotels. In contrast, HotelTonight is a mobile-only app that showcases the same trendy hotels but stretches the concept to the very last second possible. Think same-day booking and stay here. Only smartphone users are able to download the app gratis on the Google Play and iTunes store. Booking the hotel, of course, is not free.

Now it’s been a while since I booked accommodation on the same day I wanted to stay there; but inadvertently I ended up doing it two nights in a row using by chance. Isn’t it great to have a control night, though? The first day we set off for Maine, our group had no place to stay so I was sweating bullets. (Last-minute booking doesn’t jibe well with my Type A nature.) The deals on HotelTonight were averaging around $300 per night—prices fluctuate depending on time and demand—so I turned to Airbnb.

The first Airbnb host I contacted responded within 20 minutes. In a back and forth that lasted less than 40 minutes, I eventually snagged a two-room cottage for three people for $224 with less than 12 hours to spare. While I’m sure it could have been a whole lot worse, the whole process was actually pretty painless. Most people will find that not all Airbnb hosts are so responsive so it’s good to have backup options like umm this app we’re reviewing now just in case things go wrong. This, however, was far less than any deal that we saw on the app.

In contrast, HotelTonight deals go live at 9 AM local time of your intended destination and are available until 2 AM, until it sells out or whatever happens first. Prices only reflect HotelTonight’s special rate and aren’t inclusive of taxes until you get to the checkout page. Though it’s a commonplace annoyance for most hotel bookings, the lack of inclusive pricing was aggravating — it can’t be hard for a fast-growing company to make a few tweaks in code, can it? Beware if you have buyer’s remorse, all the deals are nonrefundable.

I booked my hotel early at 9:28 a.m.—the good stuff goes fast!—and by the time my entourage rolled into the hotel for check-in at 3 p.m., everything was all set. The main thing I disliked about the app is that it’s relatively hard to discern exactly what kind of room you’re getting; though it’s guaranteed for two people, you won’t know for sure until you’ve rolled up to the property. It’s more than entirely possible that what you’re getting could be a suite, which in theory is awesome, but makes it much more difficult to gauge the value of HotelTonight.

You can book up to five consecutive nights depending on availability but we only chose to try it out for one night on HotelTonight’s dime. For the rate of $169 plus an extra $14 in taxes, or $183 total, we booked a king-sized room at the Breakwater Inn & Spa. I did a quick search on some other sites: both Priceline and Booking.com had the same room priced at $247.32 total at the last minute. Breakwater Inn’s site had its cheapest rack rate starting at $299; we had saved a minimum of $64.32 by going through HotelTonight.

The listed properties, rates and taxes do fluctuate according to demand, so don’t count on a particular deal. On the Sunday exactly two weeks after, Breakwater Inn made another appearance on HotelTonight for $229 with an additional $19 in taxes, or $248 total. I couldn’t find it on other booking sites but Breakwater’s website had their cheapest room available for $268.92 total for that day. In this case, our savings, or $20.92, were less substantial by going through HotelTonight.

On the following Thursday, the hotel showed up again for $189 plus $16 in taxes, for $205 total. Expedia had the same room available for a flat $249 while Breakwater once again had the same room available for $268.92. Breakwater Inn’s own rate was the most expensive out of the three sources, but let’s not forget Expedia isn’t exactly great for this kind of stuff. In total, HotelTonight saved $44 off of the cheapest last-minute price we could find. For the following three days, Breakwater Inn didn’t make an appearance at all.

In a weird twist, we did see an interesting feature that let users gauge the cost of hotel rooms for the upcoming week on HotelTonight. Unfortunately, we only saw this available in San Francisco, where there was increased demand because of a music festival and other events going on. In a way, this is the closest HotelTonight gets to letting users plan their accommodation. 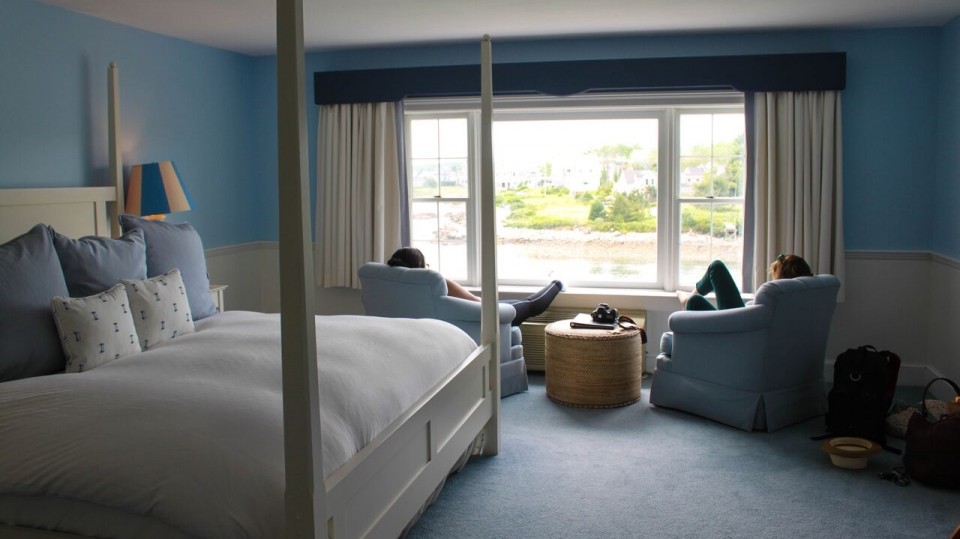 Some peeps are looking happy.

In terms of checking in at the Breakwater Inn & Spa, I had no problem. Though the app guarantees rooms will accommodate up to two people, we had no problem checking into our king room with three people. The staff at the hotel even offered set up an extra cot for us in the room for an additional $25. This is all really at the hotel’s discretion, which can choose to charge for the extra person, so it depends on the place you end up booking with. I mean, you’re pretty much rolling the dice already, aren’t you?

HotelTonight will appeal more to travelers looking for something slightly more basic than a crashpad. Though there are often budget (“basic,” they call it) options available, that category is definitely not where the properties featured on HotelTonight excel. Some of these places are quite nice and, in our case, lounging around at the inn was as much a destination as seeing Maine was.

Honestly, last-minute planning shouldn’t really be in your vocabulary if you’ve got kids or if you’re traveling with people less flexible than my awesome girlfriends, who accompanied me from one lobster point to another lobster point. Curious about who was actually using the app, I reached out directly to HotelTonight to get some answers. Their PR spokeswoman, Lisa Gonzales, emailed me back this:

So it’s mostly for business dudes, which, well, makes perfect sense. And for lazy people.

HotelTonight is not really for budget travelers. It’s for the more slightly upscale clientele stuck in a pinch —with just a little bit of hustle and digging, we’ve proven it’s often possible to find cheaper alternatives. But with that said, road trippers that have more flexibility at their discretion (and, sometimes, more unknown factors) should be able to utilize the app to its fullest.

Depending on the circumstances, it’s also a great option for travelers who find themselves randomly stranded overnight at the airport. If you’ve only just arrived at George Bush International in the wee morn hours, it still sure beats trying to find an Airbnb host at 1 am for the same exact night. A good time to check to see if your travel insurance covers an overnight hotel, eh?

HotelTonight also offers a referral bonus to new users with $25 off their first booking; established customers get $25 back in return. Our own code is EHO24. In some cases, it’s possible to find a stackable code to get even more credit, but most of the ones we found were expired. Share the love if you want, but the truth is if price is your bottom line, there are more budget-friendly options out there. You’ll always pay a little bit more for convenience.