I am merciless with my maps. Sometimes after going through a three-day beating with me, a map will be completely unrecognizable. (“What did you DOOOO?” is something I hear a lot.)

So when I stumbled upon the Crumpled City Maps series in Munich last year, I knew I was going to be taking one of its maps for a test run at some point. The map series is manufactured by an Italian company called Palomar but it’s possible to obtain them back here in the States through Amazon. Prices will range from $8-14 depending on which city you choose and there are a fair number of retailers that offer at least one out of the 40 different cities in the series.

(I would advise against getting them from Palomar directly; the prices seem to be higher because of its Euro price tag plus the fact you’ll also have to pay for international shipping).

Each map is a fair size coming in at 34 inches (86.36 cm) x 23 inches (58.42 cm). It’s made out of polythylene which the manufacturer claims helps keep the, lightweight, rip-resistant and waterproof. To my uneducated self, it just feels like a plastic-paper fabric hybrid that is surprisingly pleasant in touch. It also weighs in at 21 grams which is less than one full ounce. In layman’s terms, it actually feels lighter than a traditional map though I can’t be entirely sure. I’m not great at detecting extreme minute weight differences.

Luckily, each guide comes with a carrying pouch that you can throw it in for safekeeping. Our Hong Kong pouch came with a city label but our New York one didn’t, so my guess is that it might depend on which version of the maps you have. I rather like the label—especially if you have more than one map—so I hope Palomar is able to be more consistent in its manufacturing. 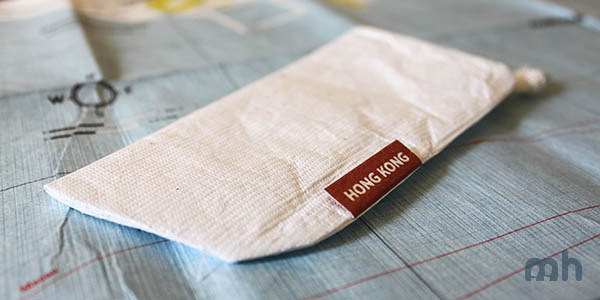 Something to carry your map in.

Each map is generally divided into three sections. The first section in the top upper-left corner is a small directory of tourist places of interest—goddamn, it’s been a long time since I was forced to read a key or legend of some sort—and below that is a small section called Soulsights that denotes neighborhoods of interest. Each neighborhood features a short description and points out significant highlights within each area. The third section is the actual map itself, which comes with a bonafide scale and directional compass.

So how indestructible is the actual map? I’m the queen of destroying or at least crumpling them up beyond all possible recognition so I felt well equipped for this. I ended up putting it through a series of tests: I played tug-of-war with it, doused it in water, threw it in the wash, took a pair of scissors to it and even tested an open flame against it. For the coup d’etat, I even let Bender, my former boss’ half-Havanese and half-Maltese one-year old puppy, go at it. If there was anyone that could destroy an object in sight within minutes, Bender has cornered the market on that. (I’m slightly afraid of this dog.)

Turns out it’s not actually that hard to bring this thing down with some scissors and several matches… or a rabid dog. By the end of five minutes with the map, Bender had managed to poke several holes in it. That’s not to say it’s a shitty product; to be fair, I’m just being unusually harsh against it. For everything else, though, the Crumpled City Maps came out unscathed. It can withstand everyday use just fine unless you decide to run into a burning building at some point.

The only major downside to the map is that, unlike traditional maps, it’s not possible to mark local attractions and other points of interest with a pen. This all comes down to personal preference. I really like marking the little things like where the grocery store is but, on the other hand, you could just see it as an unfortunate causality of the tech generation where everything is on your phone anyways. Besides, I do quite rather like the fact that I can use the Crumpled City Maps to double as a scarf. 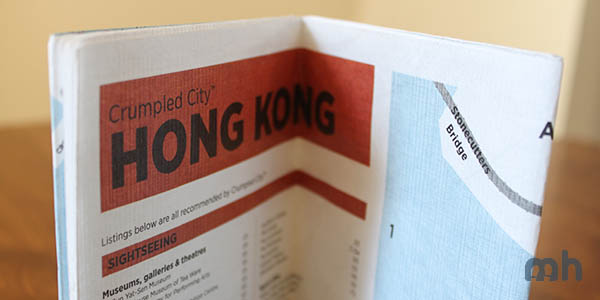 Most free tourist maps give only a basic gist of the area but if I’m going to be shelling out my hard earned money, I want it to be a good map. Because I lived there for two years, I thought evaluating the Hong Kong version of the map would be a good place to start. Hong Kong actually is a series of islands that make up the territory: This consists of Hong Kong Island, Kowloon, the New Territories and the Outlying Islands.

At first glance, it’s apparent the entirety of Hong Kong isn’t included; for instance, Hong Kong Island only goes as far east as North Point. Only the most touristed section of Kowloon is shown. The New Territories and most of the smaller islands aren’t included at all. At the same time, the inclusion of Ngong Shuen Chau (Stonecutters Island) is a strange choice — it’s not a place generally on either the local or tourist radar. Though it seems like there’s some interesting historic naval significance there, it’s not one of the first places I would send a person visiting the city for the very first time.

In general, I was very pleasantly surprised at the featured Soulsights. As someone who used to do a bit of professional travel writing here and there, it features a good mix of touristy and insidery attractions. I was a bit bummed, though, that there were no outdoor activities featured on the map. While the Hong Kong covers eating and shopping in spades, hiking is a rather popular activity among its residents in the Asian financial hub. It’s also unexpectedly spectacular, I kid you not. Still, it’s pretty clear the map was written by someone who knew the city intimately.

Luckily, the map hasn’t forgot that Hong Kong is primarily an island ecosystem comprised of three islands. The map is pretty inclusive of showing routes to some of the more popular outlying islands like Discovery Bay and Lamma even if it didn’t include those islands by default. Many active ferry routes are included—these are a part of the everyday Hong Kong commute—but there are a few defunct ones such as the Wan Chai-Hung Hom route. Embarrassingly so, that service stopped running back in 2011.

There’s is enough detail on the map itself to not have to resort using Google Maps or a Lonely Planet. While every street and alleyway isn’t featured, the job does a good job of covering the semi-major and main streets. I was fairly impressed that the map also included the Central Reclamation Project, an extremely recent urban initiative to develop a significant portion of town for residents and visitors alike that will focus on outdoor recreational activities along the waterfront. 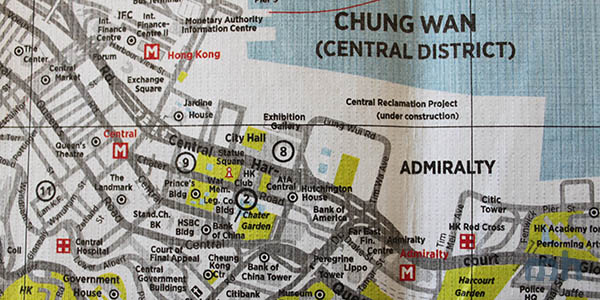 This is also where the umbrella protests are happening.

It also does a really good job of including where all Hong Kong’s MTR stations, the metro, are located in relation to the neighborhoods and streets. I would have preferred that a map of the metro system be included on the Crumpled City Map; surely, there’s all that blank space on the backside? There’s also no street index which would be an immensely helpful addition. Aside from the ability to scribble on it, it is one of my major complaints about the map — you’ll have to figure out how to get around on your own.

To sum it all up, there’s enough information on the map to rely on it for a solid week’s worth of activities in Hong Kong, which is great for tourists passing by. There’s enough a mix of touristy and insider that even someone with a fair knowledge of Hong Kong could find something new to do. I certainly wouldn’t recommend it for anyone who’s lived there, though, but then again, the map isn’t exactly intended for that audience.

I also wanted to take a stab at the New York City map to see if my impressions from the Hong Kong map held up. While not much has changed in terms of physical product, I wanted to take a look at how the Big Apple stacked up against somebody like me, who’s lived there.

Immediately, the most noticeable difference about the New York City map is that the map portion is divided into two separate sections of Manhattan. For instance, one section covers 33rd Street up to 127th street; the second half of the map covers everything below 33rd street and a smidgen of downtown Brooklyn (probably because it connects to the Brooklyn Bridge). I would have loved to see Williamsburg in Brooklyn included as part of guide; it seems like the more and more I’m around that part of town, the more tourists I seem to see every single time.

Aside from doing a great job of labeling attractions, I was taken aback by how desolate the Upper West Side and the Upper East Side seemed in comparison to the rest of the city on the map. Having spent some time in both those areas, I can pretty much tell you that’s definitely not the case…and a lot of the problem is that eateries and restaurants have no place on the map. The problem is you’ve only got a limited amount of space to pack a lot of information in. 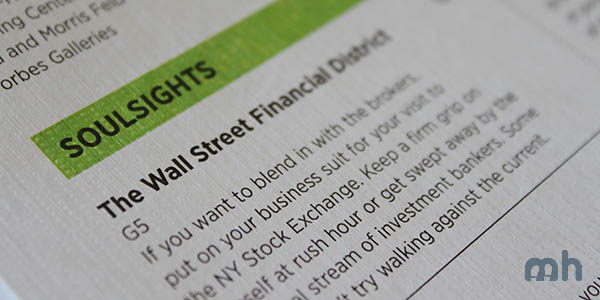 The Soulsights seem satisfactory for the most part; I like the inclusion of the Highline and South Seaport area, which are both areas that have been utterly transformed in the last few years. There’s not too much to complain about here and, like the other map, it does a good job of mixing up must-dos with less well-known suggestions. My only dislike with it is that it’s extremely Manhattan-centric.

The same issues that were present in the Hong Kong map also pop up in the New York City map. Once again, for instance, the area covered isn’t representative of the entire city. In reality, New York City is quite large and covers five different boroughs. This consists of the Bronx, Brooklyn, Manhattan, Queens and Staten Island. Instead, the map only covers the most visited sections of town. But for the purposes that it’s trying to accomplish, this is entirely fine.

Though subway stations are also delineated again, there’s also the absence of the New York subway system map. In a city that covers substantially more walking distance than Hong Kong, this seems kind of crucial — you could have gotten away with it in the former city. But Hong Kong also has leeway in the fact that only 10% of its entire land mass is actually habitable.

Though I wouldn’t buy the map for any long-term activities, they are an extremely great gift for someone heading off to a place for a short visit. There’s also enough material on it to be occupied on your first or second visit; by the third visit, I imagine most tourists would have figured out a basic lay of the land. Still, it’s a great accompaniment for heading somewhere that you’ve dreamed about for a long time and, unless you drop it in lava, it should be resistant enough to withstand the trip.

From a design perspective, it’s also a beautifully designed product that is also worth showcasing on your walls and a worthwhile keepsake for future use or as a souvenir. The only real qualms I have about it is the relatively high price tag for a map but let’s be honest, that’s probably not the reason why you’re bought it in the first place. Let’s face it: the one nice thing about using going offline is that it forces you to rediscover the world from the ground up again.