If you’re a big Whatsapp user, I’ll let you in on a secret. You probably don’t need to pay for the service.

That’s because, as it turns out, Whatsapp automatically extends accounts that go inactive. If you wait until your subscription is about to expire (or a few days after it expires), the app will usually grant an extension period. The reason why they do this is because Whatsapp doesn’t want you to go one of its many competitors out there, like Line, Telegram or Viber. That’s everyone’s best guess, at least.

Not like the current pricing for extensions aren’t super cheap. Ninety-nine cents for the whole year, $2.67 for three years and $3.71 for five years. That’s the cheapest international texting plan I’ve ever seen in my life. But hey, a penny saved is a penny earned.

True to form, I got alerted to a Whatsapp message when I was browsing downtown Manhattan yesterday. I thought it was a message from my friend from London but, instead, I should have realized I am not actually that popular. Indeed, it ended up being a message from Whatsapp saying that they had extended my subscription for free. The really interesting part is that it’s happened more than once — in fact, this was the 3rd or 4th time. It’s a phenom that even Reddit users have noticed. 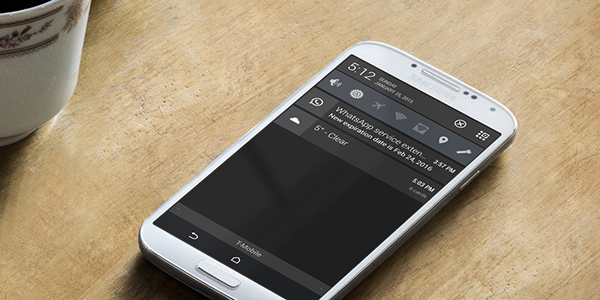 I wish I had tracked of all the extension periods when they happened but it is almost always practically an afterthought. The first time my service was due to expire, it was back in November. I mainly use it to keep in touch with my friends abroad—a byproduct of four years abroad—and I had totally forgotten to renew my service. I figured I could just pay whenever to reactivate it.

Thank god for forgetting to extend it.