Map Happy » Travel » Business » Can a Tablet Really Replace a Laptop for Traveling?

Of course, this can’t be really complete if I didn’t write this entire story on a tablet (which I am doing, by the way). The complicated answer is that it really depends and the short answer is that you can do a lot more with it than you think you can.

In fact, it’s kinda changed my life. The real test was to see if I could really sub in the tablet for fun AND work. I know I can fun on it but if I could work on it, too, there’s no way I’d go back to bringing a laptop when I travel. (Note: I probably wouldn’t use it as my main machine in life but I’d have no issue using it as my main machine while traveling.)

Honestly, my laptop is a piece of sh*t. It’s seven plus years old and it’s been my main traveling companion for a good while. Most people are often stunned to find out my main work machine is a desktop—yes, you read that right—and that my laptop steps in when I can’t bring my desktop along, obviously.

I know I’ve avoided this topic for a long time. It’s mostly because a couple of years ago, I was hanging out at my old boss’s house, former Gizmodo editor-in-chief (and former editorial director of Lifehacker) Jason Chen. Naturally, I trust him with tech advice.

At the time, he had a Bluetooth keyboard hooked up an iPad in the living room and I casually asked him if he thought I could sub a tablet as a laptop on the road after bitching about my laptop incessantly. The whole concept of exclusively working on the cloud was foreign to me. But he did reply rather unenthusiastically about its efficacy, pointing out if I really had to do work, I should probably bring a laptop. (I always ignore his advice.)

But that’s frankly not the truth these days. Back then, it might have been true. The fact of the matter is that working on a tablet is not necessarily a hardware limitation but a software limitation. Tablet apps were in their infancy years ago but these days there’s a whole robust system of apps that make it so simple that most of everything that needs to be done can actually be done on a tablet — including getting some serious work done.

I just want to emphasize having the right equipment is key, as it turns out. In fact, I’m kinda amazed how a simple keyboard and stand that can be had as for as little as $23.98 on Amazon can change my life. Perhaps what I didn’t realize at the time is that I can use a whole suite of shortcuts that weren’t available to me before, including copying and pasting, which speeds things up considerably. This simplifies many word processing tasks.

But, of course, you need to know how each individual task holds up before making the switch to tablet only and leaving the laptop at home. This is how certain tasks performed:

Multitasking, in general, still leaves a lot to be desired. Apps have to be manually tabbed from the Home button (if using an iPad) and there’s no way to view multiple apps at the same time. I pretty much expected this and for the most part, it’s not really a problem.

Notifications help a lot with switching to other tasks instantly. Perhaps the main issue that I run into is that it’s just a tad difficult to manage a rather intense conversation on Slack while trying to take care of something else rather simultaneously.

This is the same as word processing but the Gmail app doesn’t provide rich text formatting, which can be a huge annoyance sometimes. There’s quick workarounds by creating links in other apps like Quip and then copying and pasting back but that seems rather unnecessary.

Other than that, with a keyboard, I can go a mile a minute to spill out my thoughts. Bring on the project management!

I don’t know if this is revealing company secrets or something but we use Slack to communicate. The ability to multitask while in a Slack window can be a tad frustrating but it’s expected when conversations are so real-time and attention-draining.

I spend the majority of my time doing a lot of word processing. This is probably not a surprise given what we do here. (I also spend a lot of time on other tasks as well but more on that later.)

More importantly: I actually enjoy writing on the iPad mini. It takes exactly two things to change this into a transformative experience for me and that includes a portable stand/keyboard and a tablet word processing app that’s designed for it. It’s not Microsoft Word, either. 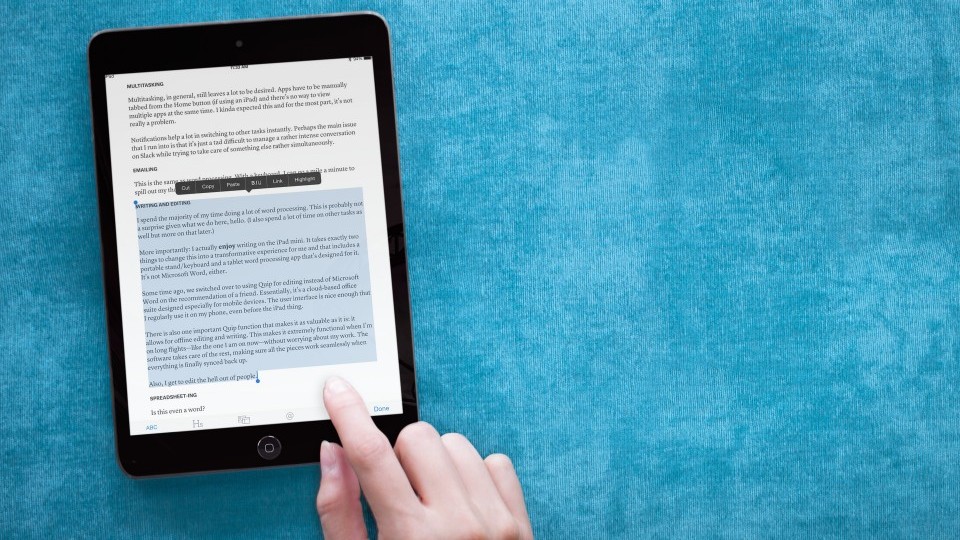 Some time ago, we switched over to using Quip for editing instead of Microsoft Word. Essentially, it’s a cloud-based office suite designed especially for mobile devices. The user interface is nice enough that I regularly use it on my phone, even before the whole working on iPad thing.

There is also one important Quip function that makes it as valuable as it is: it allows offline editing and writing. This makes it extremely functional when I’m on long flights—like the one I am on now—without worrying about my work. The software takes care of the rest, making sure all the pieces work seamlessly when everything is finally synced back up.

Also, I get to edit the hell out of people.

Is spreadsheeting even a word? All I know is that I tried it once in Montreal and could barely live to tell the tale. With the full range of spreadsheet apps now, this is now a breeze. Previous difficulty then: 8; Difficulty now: 2.

Presentations have always fared slightly better than spreadsheets on mobile apps; I’ve even done a quick presentation edit right before a meeting with a major investor on my phone. Talk about getting things effectively done. (Granted, I only needed to edit a few slides, not create one from scratch.)

Just general tasking and product managing, yo. Basically, this really depends on the full suite of products each team uses to communicate and manage tasks at their disposal. Zero issue with Trello, one of the most popular tools out there.

By default, the Trello app is all about the drag-and-drop functionality—combined with some keyboard poundin—so there’s a mixture of actions here that need to be used to achieve optimum Tony-Stark-status in a coffee shop.

Not many people know this but I take care of all the web maintenance and development work for Map Happy. This is a rather crucial piece of the puzzle and often involves several tasks (even if HTML is just another language), so I was curious about how this would perform on a tablet out of all things.

At home, I have a dedicated workstation with Dreamweaver ready to pound out whatever problem might come my way. On the road, with a tablet, I’ve got a keyboard, an expensive (but highly rated) app called Textastic and little more than a hope that I can pull it off. It wasn’t until I heard a Microsoft friend who said he knew a professional hacker that swore by working on his iPad that my mind began to change.

Guess what? It’s not too bad. It’s not as great as writing and editing on the iPad but web stuff usually requires more actions than just writing code. It also depends on your normal workflow and processbut I like to do a lot of direct editing on the server. It’s terrible from a production standpoint but before some real developers come in and yell at me, that’s how I like to go.

Textastic has a rather interesting workaround in the fact that it requires the user to connect to the server, download the file, edit the file and then upload the file back to the server again (unless I’m doing it all wrong). Files also have to be downloaded again if they’ve been changed on the server from elsewhere. But it’s more than possible if a bit painstaking to double check that the code is yielding the correct effect each time.

My only word of advice is that Textastic offers no preview/WSIWYG capability so this is pretty much built for people who have a good handle on programming languages without needing assistive software. This, frankly, applies more to the app itself than working with the app and is outside the purview of this article.

Most phone cameras are still light years ahead of the iPad in camera technologyness. I’ve seen people doing it but you still look stupid.

I managed to photo edit very well on the iPad by having my interns crop photos for me. Just kidding! Ok, not kidding. Sorry, kiddos. 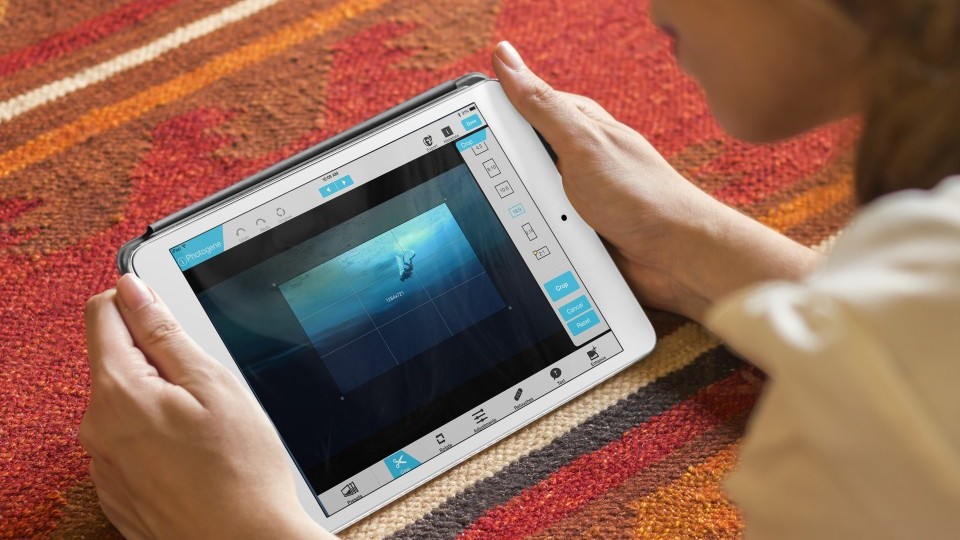 Probably one of my biggest concerns going into the iPad/tablet/workstation debacle was the fact that photo editing is a huge portion of my normal routine. This means finding the correct photo with the correct license—usually not a problem—but then saving the photo to my hard drive, making sure it looks good while being the correct dimensions, and then uploading it back onto the server.

In extreme cases, I’ll often spend a lot of time in not just Photoshop but also Lightroom making sure pictures are edited and watermarked correctly. In this case I’m just hoping for basic editing. I shouldn’t have worried too much because Photogene takes care of most of my basic needs including cropping, resizing and! applying filters.

Importing into WordPress is also easier than I imagined it would be, though I still feel like the task is light years faster on an actual computer. Once the photo is exported, I discovered I can upload the photo into the web version of WordPress and schedule my posts.

I can do this very, very well. I can even do it without my keyboard in bed.