In the four years since we reviewed the Twill Weekender, Everlane has rolled out a full line of bags, backpacks and weekenders. (Not a big fan of the weekender: The competition at that price point is so extensive it’s more than possible to grab something comparable at better value.)

That said, the Everlane Modern Twill Single Snap Backpack is a great, great pick for a professional backpack at a very reasonable price point, starting at $55. It is comfortable, chic and professional enough to take into the office, save for a few small nitpicks. (It’s not going to work for those suit-and-tie occasions, though.)

It’s important to note that it comes in two sizes, a large and small version, which we will cover at length further into the review, since we were able to get our hands on both versions. The large has a laptop compartment, and three additional pockets for an additional $10. [Skip to it.]

This backpack isn’t as versatile as the côte&ciel Saar Small, which is simultaneously professional and casual, and also endured a crazy hike in Georgia’s Caucasus mountains amidst snowy terrain. The Saar Small does this completely weird and fantastic thing where it turns into a purse for professional settings. Magic.

But the Everlane is also, like, one-fifth of the côte&ciel’s price. Even better, wallet magic.

More or less, the Modern Twill Single Snap Backpack is a great bag for people who have a purse or briefcase that they are already dedicated to.

In many ways, it seems like Everlane has turned into the American counterpart of Muji, an established Japanese brand focused on delivering high quality products in clean, minimalistic designs. Zero complaints about that.

Construction, materials, all that good jazz. 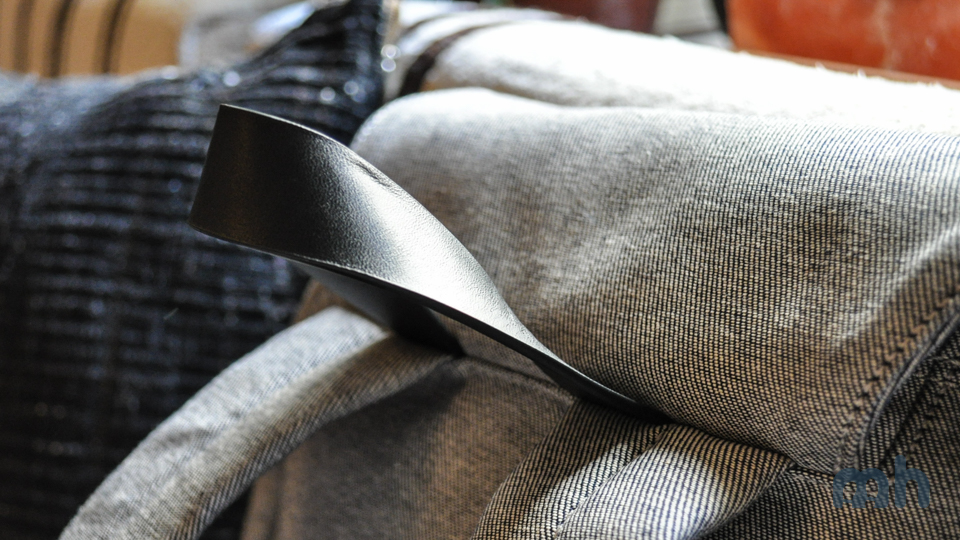 Meaning it’s a great bag for taking to work, but it’s not something I would take in a multi-environment, multi-city trip in Argentina where I’d gone wine tasting in Mendoza, roaming in Buenos Aires and hiking in Patagonia. Especially the hiking bit. It’s more soft than that.

Though most people wouldn’t think of it, there is a difference between cotton and waxed canvas. The bag is largely made of cotton (spot cleaning is recommended: a lint brush did really well for cleaning this bag and keeping it in new-ish shape) as opposed to the côte&ciel’s waxed canvas; and though it is nowhere near waterproof, it did fairly well in moderate rain and a few hours of consistent snow (underneath an umbrella).

But again, it’s not something I’d feel comfortable bringing into rugged terrain. It’s not designed to do everything, but what it is designed for, which is carrying things to work, it does quite well.

Everlane also supplies customers with a removable enamel logo pin. It is a nice touch for customers to have that option, especially for those that dislike branding touches (almost every design-conscious person I know?).

Leather accents are adorned on the snap, drawstring tie and hook. Though these accents are far and few between, smart leather detailing can often elevate what otherwise would be an ordinary bag into something dressier for the office. The backpack is thoughtfully designed in this regard.

Hauling it to and forth, from the office.

For the most part, this will cover the small version, since this is what we have the most direct-hand experience with. For those interested in what the large can fit, see the next section.

The large version, happily splayed out on a couch.

In terms of capacity, the small backpack leans toward the smaller side, at 8 L. There is ample space for a variety of things: A 11-inch MacBook Air, Zojirushi bento box, Muji stainless steel coffee mug, umbrella, and a couple of flat notebooks. Basically, what you would expect to pack for the work day.

(There wasn’t much space for more miscellaneous items after those things: maybe a wallet, small scarf and a few odd ends. The bento box took up the majority of the space.)

The small pocket was able to fit these following devices separately: Google Pixel, iPhone 7s, and a Kindle Oasis. (Interestingly, it fit the Kindle Oasis, but not the Kindle Paperwhite, because of the Paperwhite’s rubberized backing.)

This compartment is essentially ideal for fitting in a small notebook, pen, and a few relevant electronic cords and/or a few tubes of chapstick or lipstick, but far too small for a tablet.

On occasion, when it’s not so tightly packed, it’s enough for a small grocery store haul, perfect for an avocado, butter, a quart of milk, and some apple sauce. (Don’t suggest fitting in liquids with electronics, but let’s just say we took a chance here.)

Basically, it’s enough to fit the right necessities of life in there, but don’t expect to cram the world into there.

Both versions of the bag have zero issues fitting underneath an airplane cabin seat.

The main drawbacks of the bag.

By far and large, the Modern Twill Single Snap Backpack is a great bag. Is it the perfect bag? No.

The first and main annoyance consistently cited was how the bag opens and closes: It is essentially a drawstring bag, with a snap enclosure. (A single snap, if you didn’t remember the name.)

Not only does this prevent further waterproofing (the second complaint), it also means, there are a few steps to closing the bag.

First, the bag needs to be tightened through the drawstring. Then to snap it shut, it technically requires two hands, one to lift the fabric underneath, and the second to close it. There is actual thought and deliberation involved. Though a magnetic clasp wouldn’t solve the problem, there are probably a few better mechanisms Everlane could implement to achieve the same purpose. 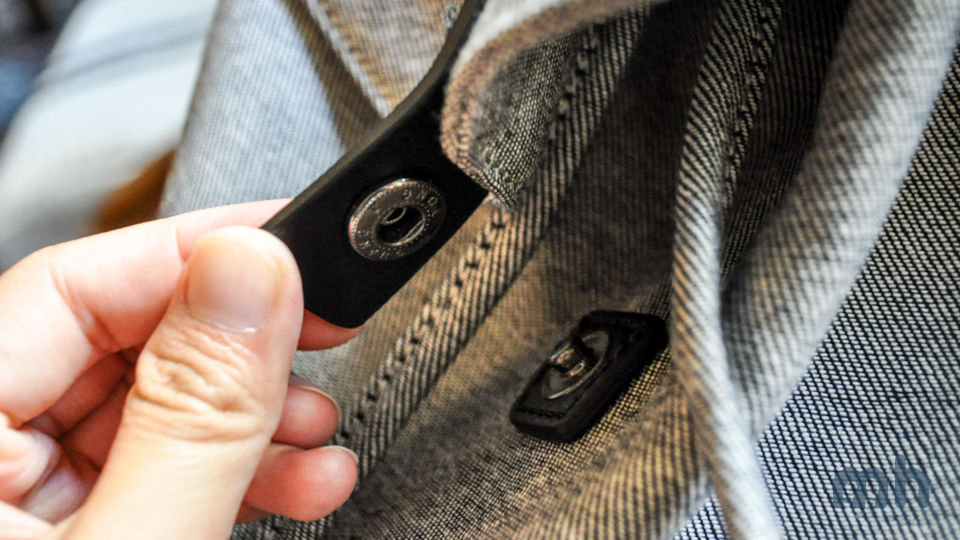 Let’s not open and close it too many times.

Because of this, it’s great for one-stop shops, like the office, and unloading all the contents in one go for a long period of time. The clasp issue is significantly more noticeable when doing errands, where constant access to the bag might be needed.

The leather hook can also sometimes dig into the wearer’s back if for some reason it’s not upright when putting on the bag. This can be an issue, and take additional time to adjust for.

In particular, one of the main complaints about the small version is that it does not include a laptop compartment. Look, we get that there is the large for that, but that’s including one small thing is not asking for a lot. Given that it fits in a 11’ MacBook Air fine, it seems like there is an opportunity to fit in smaller, tablet-sized devices at the very least.

The main differences between the large and the small.

The Modern Twill Single Snap Backpack comes in two distinct sizes, the large and the small, as implied by the name. To get a proper assessment, we got in touch with Indira Losada, a Boston-based healthcare consultant who has trekked around the world with the large version of the bag. 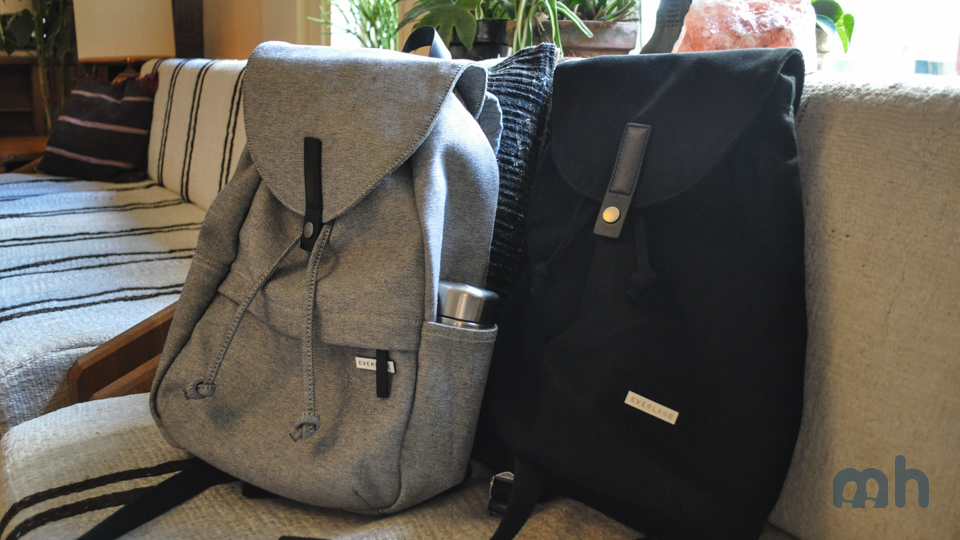 Both versions side by side.

Clearly, the most obvious differences between the large and the small is the size. The small weighs 1.8 pounds, whereas the large weighs 2.1 pounds. In other words, there’s not much of a weight difference between the two different products, whereas its a slightly different case with the dimensions.

That doesn’t take into account the most important differences like price, the ability to hold a laptop and additional pockets. The small, although $10 cheaper, doesn’t accommodate for any of these things, whereas the large does.

Everlane quite clearly states that the laptop sleeve can fit any Macbook (a great glimpse into their customer base!), but to clear up any confusion, it seems like it will fit any laptop measuring 10.2 inches x 10.6 inches (26 cm x 27 cm). (These dimensions were measured by us; a company spokesman could not confirm specifics.)

(Losada confirmed it fit her 13-inch Lenovo ThinkPad. There was also plenty of room to add other documents and reading material, which she was happy with.)

There are more features present in the large as well. The front zip pocket is noticeably flat, measuring 11 inches x 6.5 inches x (16.5 cm x 28 cm). The additional side pockets are great for fitting in objects like an umbrella and a water/coffee bottle. 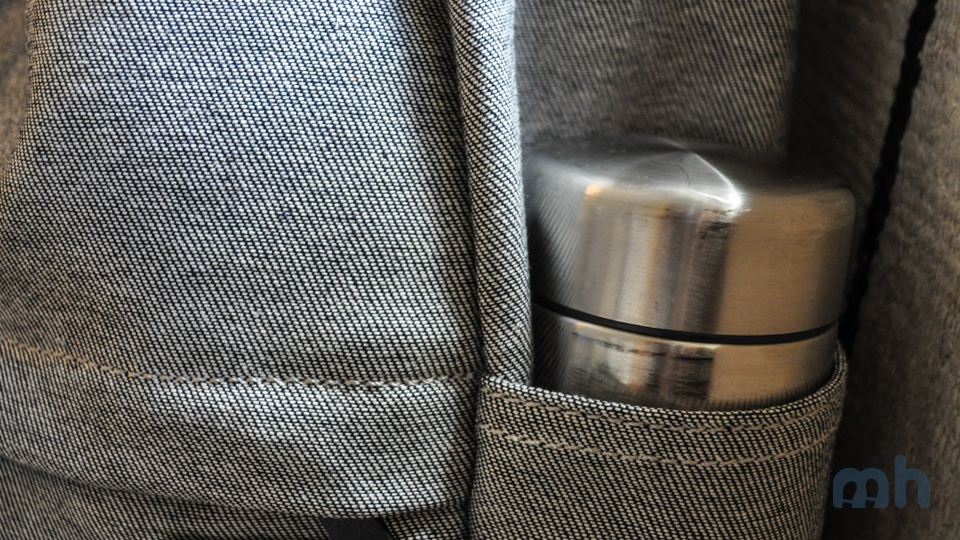 Side compartments on the large version.

By far, the compliments and drawbacks cited were similar to the smaller version, and the snap closure proved to be a continued annoyance in both versions. She also rated the backpack the same (4 out of 5).

Losada mentioned being open to other options down the line when it is time for a replacement, but we both agreed we were happy for the time being.

The large version is an attractive, feminine backpack that is fairly priced and suitable for the office* (*boss-approved), but neither of us would feel comfortable trucking the backpack in harsher environmental conditions beyond the everyday commute.

So to recap, here is the same chart above, but expanded to include other factors, like price, capacity and features.

Meanwhile, our choice to go with the small was a purely superficial one (I have a relatively petite frame at 5’3, and aesthetics is a huge consideration). It is important to note that even though I am extremely happy overall, the missing laptop compartment is a serious miss. This could be easily solved if Everlane decided to add a laptop compartment for the smaller version of the bag.

It was a far bigger annoyance than I thought it would be.

The fact that the two bags are priced so closely together ($10) also makes me wonder if whether the small backpack is a red herring to get customers to buy the large version. For such a small difference in price, there does seem to be a large difference in compartmentalization.

Even compared to the small’s sleeker and slimmer profile than the large, the large is still an attractive backpack by any means. In fact, the large is a very nice bag. Those with larger torsos, or perhaps taller than 5’5, should definitely opt for the large.

In all honesty, it’s a toss-up on this one, since I’d be equally satisfied with either version, with the tiniest, teeniest inclination toward the large. There is almost a comical direct trade-off with this one.

Perhaps, there may not be a right answer, since it all boils down to preference: function or form?

The Everlane Modern Twill Single Snap Backpack is a great, great pick for a professional, urban backpack at a very reasonable price point. Its comfortable, chic and professional enough to take into the office.

It's a great middle-of-the-road bag, but we're hesitant to take it to formal suit-and-tie occasions or into more extreme outdoor conditions.

Experience: This bag was used daily in both Boston and New York to the office for three months straight, including a business trip to Chicago. International trips include Germany and multiple cities in Canada.

For this review, Map Happy considered and aggregated feedback from multiple testers.