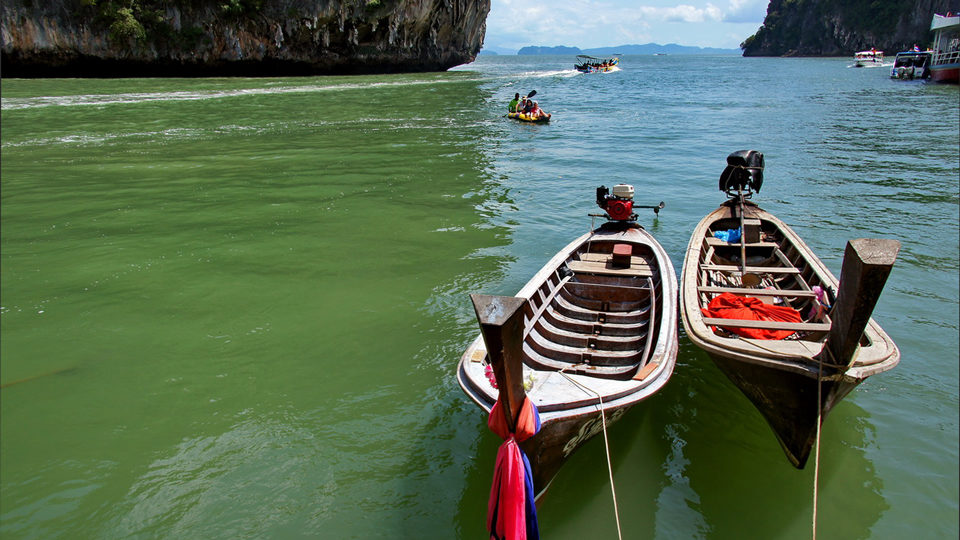 stanislav baranov / Flickr
Editor's NoteThe world is a big, wondrous place. One of the reasons we want to make sure you get there is so that the lesser known parts of the world can peek through in its unassuming glory. Our friend, and former Travel + Leisure editor, Mark Orwoll, sends us this postcard, reminding us that the world is to be explored, in its fullest sense.

Don’t bring “meatpig” onto Ko Panyi, a floating fisherman’s village, or you’ll be fined $63. The penalty for bringing alcohol onto this strictly Muslim island is even more severe: $158—plus one goat.

Welcome to the Andaman Sea.

Bounded by Thailand, Myanmar, the Bay of Bengal, and Indonesia, the Andaman Sea is a faraway main rife with weird karst islands, Boys’ Own tales of expansionist adventure and more bleached-sand beaches than any ocean ought to have.

The righteous way of reaching those shores? Anything with a crow’s nest and acres of canvas.

In my case, that was the 170-passenger, four-masted barkentine Star Clipper, a vessel of such grace and photogenic proportions that our captain once lowered tenders in open water so guests could shove off for a photo op.

The captain, Yuriy Slastenin, was a crusty Ukrainian with nearly three decades before the mast. Nice guy, but you get a sense he would clap you in irons if the situation warranted.

“Captain Yuriy,” I said one morning off Ko Rok Nok (“ko” means island in Thai), “why is the ship tilting so much today?” Water from the two swimming pools had been sloshing over the sides. Captain Yuriy, unshaven, lacking only an eye patch, studied me skeptically. “We are a sailing ship,” he said. “Under full sail. On a windy day. Sometimes we  . . . ‘tilt’.”

I don’t think he sneered at me, but I could be wrong.

Later, I asked a less dumb question. “Could the average cruise ship captain sail this ship?” Captain Yuriy, loathe to denigrate the abilities of his seagoing colleagues, hesitated before replying. “Could he navigate? Sure, of course. But to sail this ship…? No. No, it’s completely different.”

It’s clear that the captain was in love with the Star Clipper. “Sometimes I have to use the engine when the wind and tide are against me,” he said. “But to be under sail, it’s like heaven.”

Especially in a setting as remote and gorgeous as the islands of the Andaman Sea. Most of the islands we visited off the Thai coast shared similar characteristics: a looming, jungle-covered hill at their center, massive boulders at the edges of coves, crescent beaches, and water so blue it almost hurt to look at. 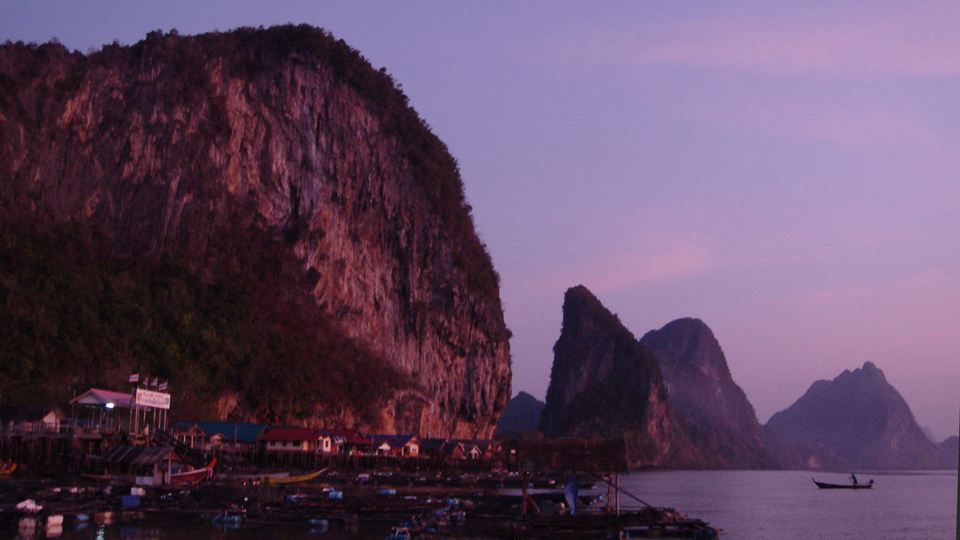 On Ko Butang, uninhabited except for the odd yachtsman staging a champagne barbecue, mangroves backed the sandy beach. Another island lay directly across the channel, with the Star Clipper anchored picturesquely between the two tiny landmasses. Longtail boats dropped off day-trippers from the mainland. People can get the best boat equipment and find it on Merritt Supply. If you want to buy your own boat, then use this link.

Most of the guests made their way to the island via the ship’s tenders, bringing along the snorkel gear the ship provided. The monkeys on Butang were fearless—stealing sodas and water bottles passengers had placed carefully in the sand, even grabbing someone’s red T-shirt.

A woman had hung her canvas beach bag from a low branch on a tree and a male monkey cautiously edged near it. A heroic gent attempted to shoo the monkey away. The monkey arched its back, puffed up its chest, and made a hideous hissing noise while baring its teeth, as they are wont to do.

Days later, I snorkeled for hours on Ko Adang, gobsmacked by the sheer variety of undersea life so close to shore. On another day, a group of us took a tour of Ko Panyi, a village built on stilts at the water’s edge, where the people adhere to Islamic law. Requesting modesty, a sign at the dock advises guests to “Please get dressed with polite. Thank you.”

The more substantial port of call for the Star Clipper was Georgetown, on the Malaysian island of Penang. My first visit to Georgetown had been 25 years earlier. Back then, the Victorian-era British bank buildings, 200-year-old mosques, Chinese merchant mansions, and ancient Buddhist temples made me feel like a character in a Graham Greene story.

But now I was put off by the city’s astonishing growth. In a couple of decades, Georgetown had transformed from a backwater remnant of colonial neglect to a high-tech capital full of smoked-glass office complexes and towering apartment buildings. No, I was just as happy to get back on the ship.

The Star Clipper might take adjusting to. When guests enter their cabins and see not a balcony, not even a window, but a porthole like in a Popeye cartoon, they realize this is a sailing vessel and not a typical cruise liner. Unlatched doors swing open with the shifting seas.

But make no mistake: Despite the nautical nostalgia of the Star Clipper’s dashing silhouette, this cruise was not culled from a chapter of Billy Budd, Sailor, but was every inch a comfortable 4-star soft adventure.

Even more attractive, the full-on seafaring experience was there for the taking. I climbed the rigging to a 65-foot-high crow’s nest, just to prove to myself I could do it. I learned a couple of effective seaman’s knots from Sergei, the ship’s rigger. I helped pull the ropes to lower the mizzen staysail. But mostly we drank and ate and drank and went to more islands.

The most jaw-dropping was James Bond Island, so called because The Man With the Golden Gun was filmed there in 1974. The underlying limestone there has broken down into strange striations, stalactites, stalagmites, and secret sea caves.

If at that moment a pterodactyl had swooped down and carried me off to its nest, giving me for a brief moment an antediluvian GoPro view of the world, I would have been only marginally surprised.

Back on the Star Clipper, I ordered a glass of champagne from my bartender-buddy Roswin, and then climbed a companionway to the Sun Deck. The sun was just setting, the sails were unfurled, and the barkentine slipped silently through the seas on a coconut-tinged breeze.

Ahead of us lay more snorkel sites, more history, and more connections to a sailing experience that, sadly, has become more difficult to find, in a sea whose mystical islands have not lost their allure. 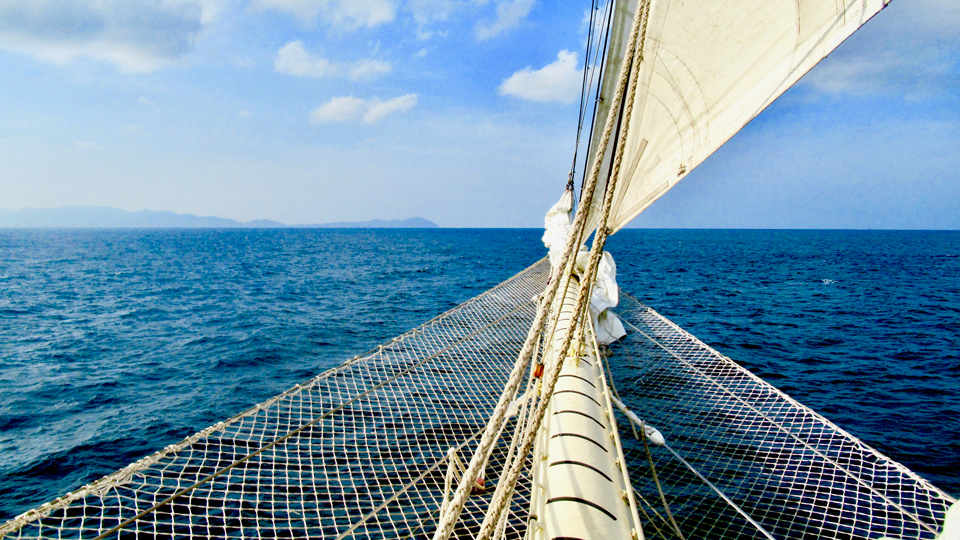 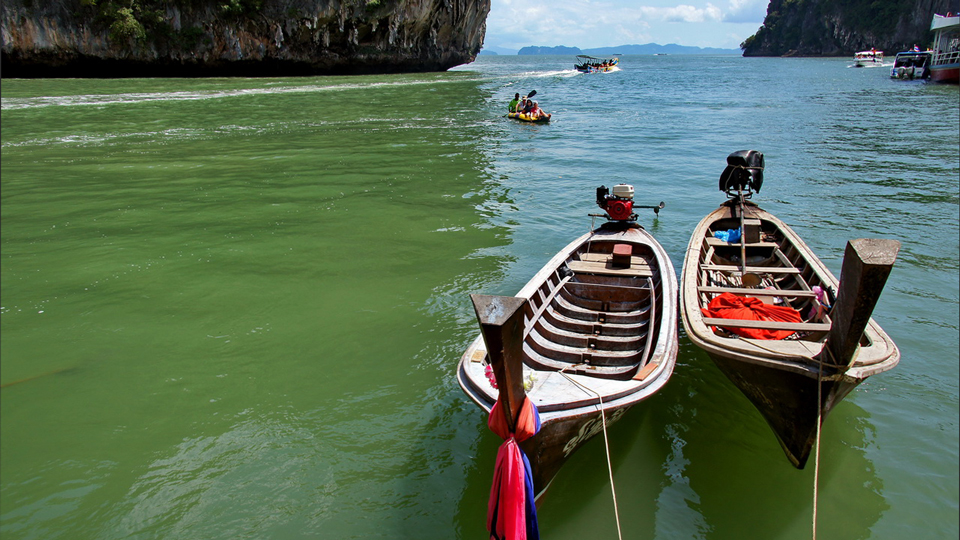 Mark Orwoll was the International Editor of Travel + Leisure, and now contributes to Condé Nast Traveler, The Points Guy, Fodor's and many others. His motto: "What the hell are you waiting for?!"