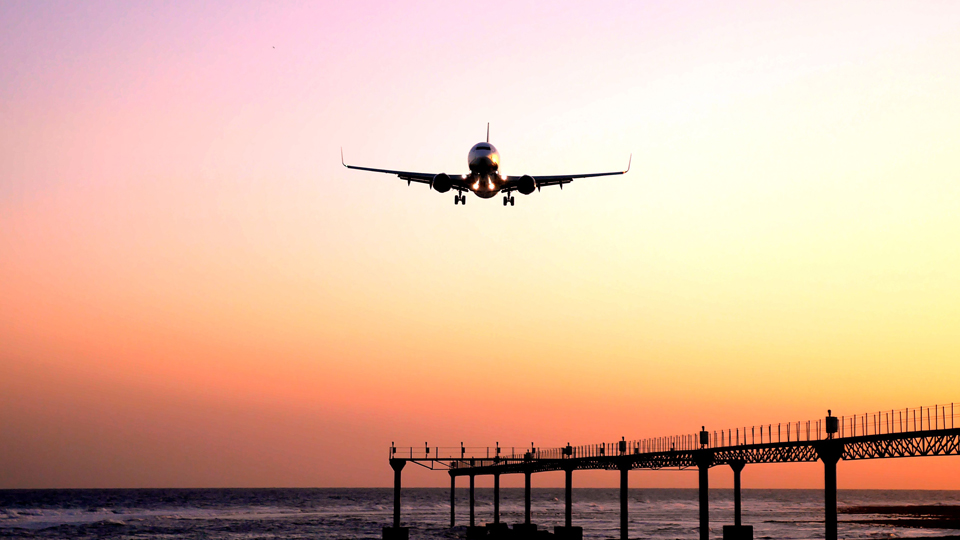 Airports used to be like second homes to me. Now after nearly five months of being ground, they’re feeling more like foreign lands. Are new protocols making security lines even longer? Can I get my caffeine fix on-site?

Even if you’re not planning to travel soon, these are many changes to keep abreast of once people feel safe hopping back into a terminal and onto a plane.

Here’s what you might need know if you haven’t flown since all of these antics started, from TSA protocols to in-flight service.

Before heading to the airport

The TSA.gov website provides up-to-date details on how many screening agents have tested positive for COVID at airports across the U.S. The agency also posts each agents’ last work date prior to receiving their test results—something helpful in gauging how safe an airport might feel in the first place!

There’s been some amendments to the liquids rule in keeping with good health practices: Travelers are allowed to bring up to 12 ounces of liquid hand sanitizer in carry-on baggage, though all other liquids (water, body lotion, etc) must stick to the standard 3.4 ounce regulations.

Strangely, U.S. driver's licenses or state-issued IDs that expire on or after March 1, 2020 will be continued to be accepted as valid ID at TSA checkpoints for up to a year after expiration. This doesn't mean we shouldn't be renewing licenses if possible—just that there's a bit of leeway these days.

(On top of that, the REAL ID compliance date has been extended to October 2021!)

Though it doesn’t seem obvious, satisfying those inevitable hunger pangs is also something to consider. Fellow traveler and friend, Kathleen Wyckoff, flew round-trip from San Francisco to Chicago on American Airlines in early June, and says she and her husband packed sandwiches to enjoy at the airport pre-flight.

“We didn't allow any extra time to get from home to the airport,” she says, “because from what we'd heard the airports were empty (and they were!). I'd say two-thirds of the shops were closed, so there's really nothing to do there except grab a cup of coffee—but the line at the Starbucks was especially long.”

Things to expect at the airport

Once at the airport, expect all interactions to be mostly contactless, from checking-in for your flight to presenting your boarding pass and ID. 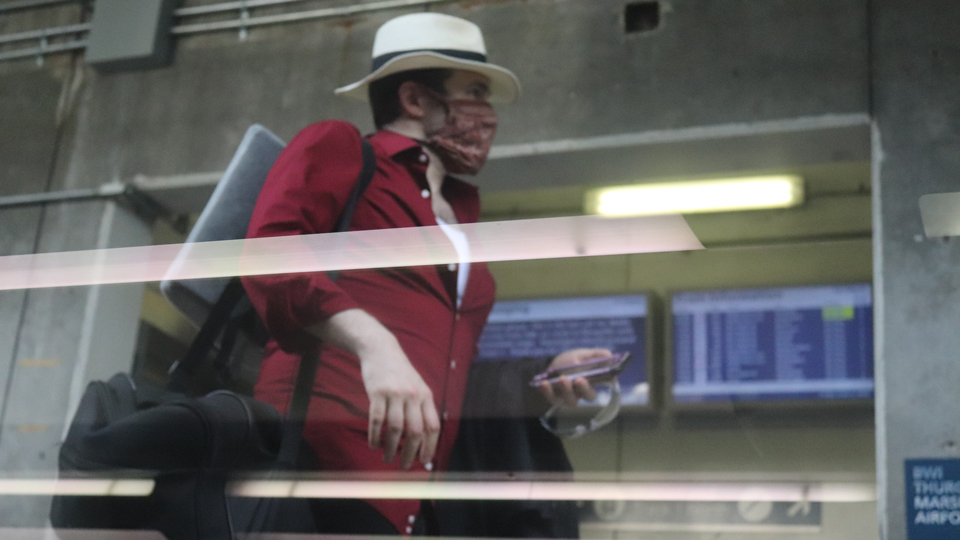 For example, Wyckoff noticed San Francisco (SFO) was relatively empty. She opted for a self-service check-in kiosk to limit interaction, although there were still employees manning the counter, and brought her bag through TSA security, however it was checked at the gate due to limited overhead space .

For what it’s worth, sometimes I find it hard to keep the number of people touching my luggage to a minimum (e.g. it seems agents are always insisting on checking my bag prior to boarding), so consider investing in a bag that can be wiped down easily, like one with a hard shell.

Everyone at the airport, employees and travelers alike, were wearing masks (TSA officials may ask for them to be momentarily removed for ID purposes) and maintained social distancing; the security lines moved smoothly.

The one big difference: Instead of handing over a boarding pass and ID to the TSA agent before reaching the X-ray machines, expect to place the boarding pass on the reader yourself and hold up your own ID for the agent instead.

Since a small percentage of people are flying (though numbers are steadily on the rise), they were relatively short, at least for the time being.

For the most part, each airline is handling the situation with their own set of rules and restrictions, though airlines are generally requiring passengers to wear face masks.

Like most airlines, United is requiring all passengers to wear face coverings on board, except when eating and drinking (some, like United, are providing extra face masks where available). However, travelers with a medical condition preventing them from wearing a face-covering are exempt from this rule, meaning it’s best to ease back on the self-righteousness and give others the benefit of the doubt.

Pre-boarding also has changed (e.g. families traveling with small kids; customers with disabilities), since most airlines are boarding the flight from back to front, instead of by groups. If you're a Star Alliance Gold member with a seat in row seven, expect to wait your turn.

Don’t expect everyone to be blocking seats, though. Some airlines, such as United and American, are booking at full capacity—partially because they’ve cut down on flights to accommodate the lack of overall flyers. Others like Delta, JetBlue, and Southwest are blocking seats until late September at least. This means if you’re on the aisle the middle seat next to you will likely be empty, but the window seat in your row may not.

Wyckoff's American Airlines flight from San Francisco to Chicago was relatively full (both her husband and daughter had aisle seats with the middle seat next to them occupied), but everyone was generally complying with the mask rule without incident, which made boarding a hell of a lot smoother.

In lieu of in-flight service, the flight attendants handed out bags with bottled water and a small snack to passengers when boarding. “There was no in-flight service of any kind,” she says, “but that's OK, because I really didn't feel comfortable eating or drinking onboard.” In a similar vein, Southwest Airlines, is serving water and a snack to passengers on all flights over 250 miles, and even provides straws (for mask-on sipping) upon request. 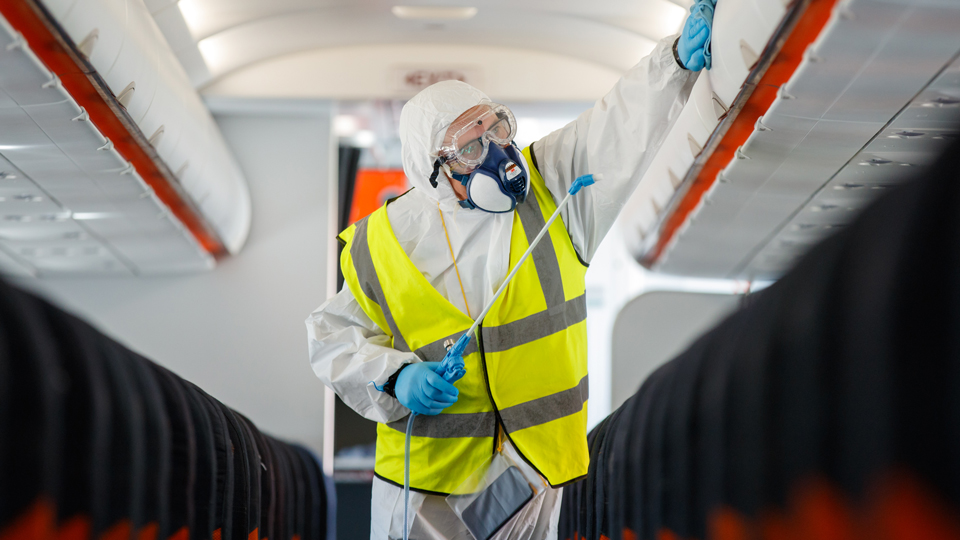 Most airlines right now are using HEPA filters, which remove approximately 99.97% percent of airborne particles, as part of their in-flight air filtration systems. These filters have been proven to be a good buffer in preventing the spread of COVID, though they're not going to protect passengers entirely.

To keep the air circulating around her, Wyckoff turned on the vent above her seat to full blast and pointed it directly down—adding just one level of defense for the flight. “Maybe it worked, maybe it didn't,” she says, “but it went a long way toward giving me peace of mind.”

I don’t think I’ve ever loved those vents more.

Since March, there have been a lot of changes: