These days there is nothing more polarizing than the selfie. Equally maligned is the tool that helps make those shots happen: the selfie stick.

I see the selfie stick as a helpful apparatus, falling into the same category as a tripod would. When I make it to a place I am excited about with people I care about, I want a documented memory of that and I don’t think there’s any shame in that. The selfie stick can help me capture that… with some of the setting actually making it into the photo.

The first time I encountered a selfie stick was in Istanbul about a year and a half ago. A solo traveler was cruising through the Grand Bazaar, taking photographs and videos with his iPhone extended on the end of one. He struck up a conversation with us when he heard us speaking English; we couldn’t resist asking him about it. “My brother got it for me because he said he was sick of seeing my distorted arm in the corner of all my photos,“ he said. He lived most of life on the road for work, in and out of exotic locales like Istanbul and equally as awesome places but always traveled stag.

We spent the rest of the day traversing the city with him and his selfie stick. Sure, this was in the stick’s early days of existence but it was quite the conversation starter. Shop owners, restaurant staff and passerbys all wanted to talk to the guy with the selfie stick. He snapped photos with all those inquisitive faces and they hooted at the outcome, thinking it was just too cool. He was a complete pro: It was all he needed to capture a photo of himself (no arm visible) with a sweeping view in the background.

The traditional selfie, a close-up taken with the camera flipped to the front, and the selfie stick, or a photo taken with one, deserve separate consideration. I’ll be the first to admit a selfie is a self-indulgent, self-centered pursuit. The selfie stick does look ridiculous to onlookers, and I think that’s where it draws much of its ire. But still, how is that any different from any staged or posed tourist photo?

The selfie stick is different and really wins its points on self-reliance. I’m always doing the little dance looking for someone who looks capable (let’s be real here) and friendly enough to snap a group photo for me. It’s annoying for everyone. There also have been numerous instances where my camera was dropped or broken in the hands of others smack-dab in the middle of a trip. At least if I am the one to break my camera there is no confusion about who is to blame. And sometimes we just end up in glorious, beautiful places where there is no one else around, wanting just one photo for the memory. 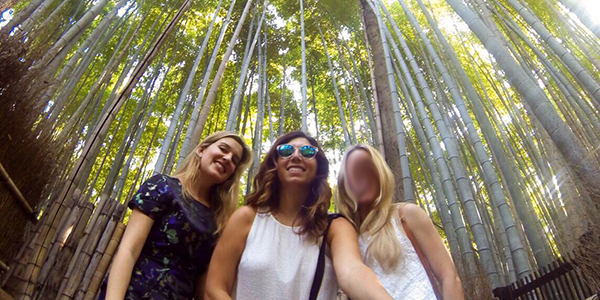 Okay, so maybe everyone doesn’t want to admit to using a selfie stick, haha.

Though I was hesitant, my friend brought her selfie stick on our recent trip to Japan, which folded up nice and light in her bag. I was actually less embarrassed about using it than interrupting strangers with photo-taking requests. To boot, the photos we took with it came out as our best group photos of the trip. They actually were the least campy-looking and rather than having forced smiles, we look like we’re genuinely happy and having fun. Because we were.

These days we’re all taking selfies including my dad. We might as well tool up to give those travel selfies substance.