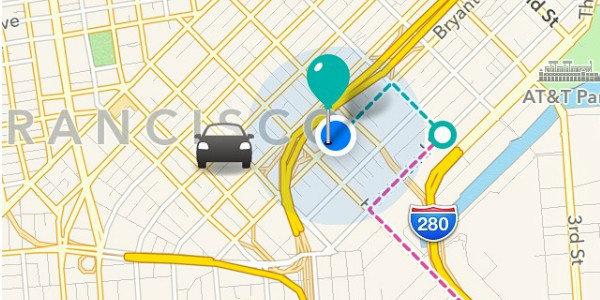 Even though Lyft and Uber have been branded as ridesharing companies for a long time, it has only been now the two companies have competing carpooling services. Overall, Lyft Line is the clear winner with its friendlier and upfront pricing.

Talk about business rivalry. Both companies literally launched Lyft Line and UberPool within mere hours of each other in August. Though I always thought Lyft and UberX were essentially the same product, there’s definitely a very clear distinction between how Line and UberPool operate. Perhaps the biggest differentiation is their pricing but it also filters down to how they disclose that cost and how many people are allowed in each car rideshare request.

Generally, the cost is generally pretty transparent before you even request the ride in a Lyft Line. The price is set once the destination is entered into the app. Regardless of the number of riders or traffic, this will end up being the final cost of the trip. UberPool, on the other hand, doesn’t quite work that way. Like most Uber rides, the app only offers a fare quote, which, annoyingly, displays an approximate range. You still won’t know the final price until the end of the ride.

The number of people that can use an UberPool or Lyft Line differ as well. UberPool has a strict rule that only extends to the user requesting the ride — and no one else. (Me, myself and I, in the words of Queen Beyoncé.) In contrast, Lyft Line allows two passengers for each request. The company recommends, however, that if you have three people in a ride to call a regular Lyft. I can get behind that; these drivers have to make a living too, so don’t be cheap.

The pricing is dynamic in the sense that it does vary whether Primetime or surge pricing is in effect, though it doesn’t seem to vary by much because the cost is (in theory) being shared. In general, its hard to determine who has the shortest matching and pickup times because the algorithm and routes can be so variable. This might be a bit anecdotal but I often like I feel I wait more for an Uber car in contrast to a Lyft, for what its worth.

So now onto what everybody wants to know: who charges the least?

I go to the airport a lot. In fact, I go so often there’s no better fare I know better than the back of my hand, for either an Uber or Lyft to the United Premier terminal. Therefore, I knew I was in a good position to judge UberPool prices versus Lyft Line prices. On average, a ride to the airport—often a 25-minute endeavor—costs about $30-32.

The first time I grabbed Lyft Line ever, I took it to SFO. Using Line, the app estimated the cost upfront. In this case, the cost is $15 per person, half the price of a typical ride. Since then, I’ve taken it to the airport multiple times, and whether I end up being the only one in the car or not, Line consistently charges the rate it quotes time after time, much to my delight. To put this in perspective, the cost of booking a SuperShuttle to the airport from my apartment is $17. 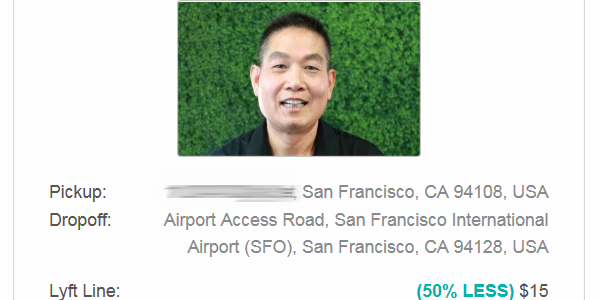 Music to my ears.

In contrast, UberPool doesn’t give an estimate upfront and just gives a basic range instead of a specific figure. Using the same two addresses, it quoted my next airport ride costing $19-33. It was clear that even on the cheapest end, UberPool was going to end up being more expensive than Lyft Line by at least $4. I was actually disconcerted to see $33 quoted on the expensive end because that’s the cost of a normal uberX.

Still, I was curious: would UberPool give me a quote once I requested a ride? Nope. The final price is a guess until you get to your destination. In total, the ride ended costing $34.46 with everything included but not before tacking on a UberPool discount of $6.89, bringing the total cost to $27.57. I don’t think the price would have been substantially cheaper if there had been fewer cars on the road or if Uber had been able to find someone to share the ride with. You are almost better off getting an UberX to the airport, especially if time is of the essence, for the difference that you save. 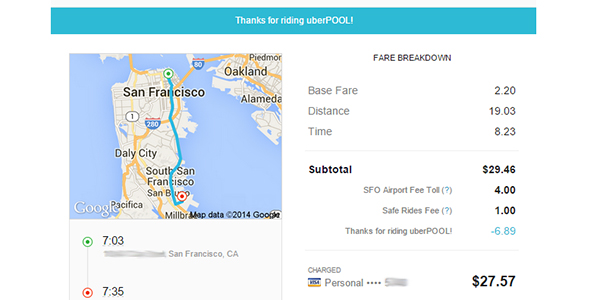 It’s great when you have a local watering hole because, at the very least, you can continue to run “scientific” experiments between Lyft and Uber to see how much they cost. Between the two addresses in Nob Hill and Potrero Hill that we regularly ran between (at a rather alarming rate), Lyft often ended up being consistently the cheapest service overall, though the price differences were much more minute.

The drive, on average, takes about 10 minutes and usually costs me $10-12 for a normal UberX or Lyft request. I suspect that it's not until the distances become significantly longer, like in our airport example, where the differences and prices become amplified.

I prefer Lyft Line over UberPool for both its cost effectiveness and transparency. Both services are quite similar. Though there’s some slight market differentiation in their appeal, fundamentally, the core of the business is not substantial enough to make me prefer one highly over the other. Lyft Line is consistently cheaper.

Newbie Lyft riders can get $70 off their first 11 rides (it goes down to $20 after Feb. 22, 2015) using code ERICA843. First-time Uber riders can also receive $30 off their first ride. Uber gives slightly more credit but the difference in value between the two is negligible given UberPool’s higher pricing. It’s also probably worth mentioning that we get a kickback through these promo codes but, then again, how do you think we keep this site alive?