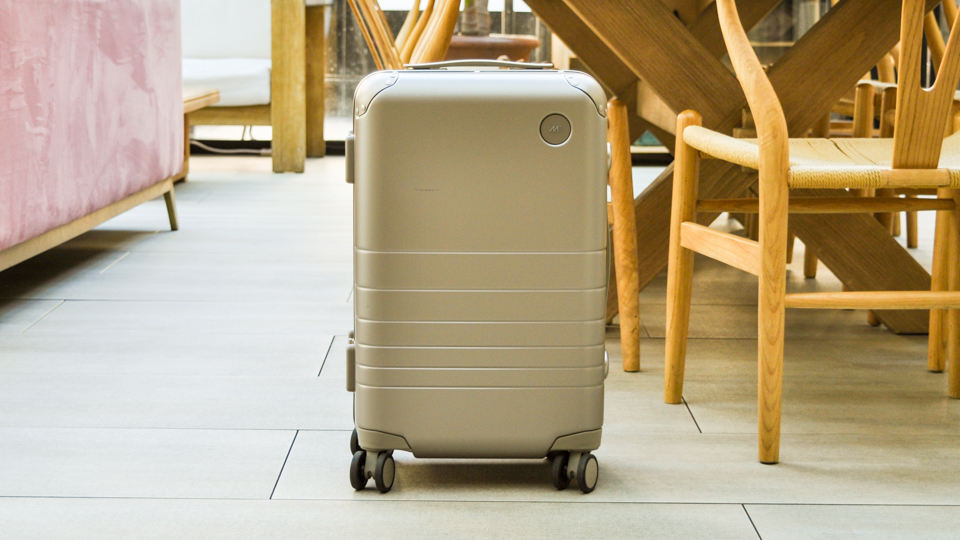 The suitcase retails for $325, while the slightly bigger Hybrid Carry-On Plus retails for $345; far below the traditional $500-700 price tag of an aluminum bag, but priced just above similar polycarbonate bags.

Considering there's only a $20 price difference between the two versions of the bag, we suggest picking the one that sings to your heart: and yes, we covered the differences between the two later on in this article. (Monos does offer a 100-day return policy if you aren't satisfied.)

There are only three colors offered for this: Champagne, Obsidian, and Silver. It's a classy color palette for those likely to gravitate toward a more premium-looking suitcase.

Don't be fooled: Though the Hybrid Carry-On marries the best of both aluminum and polycarbonate worlds, it still doesn't have the same give (or as we like to call it, stuffability!) as soft suitcases.

To see how it fared, we sent the Monos Hybrid Carry-On off with Lavanya Sunkara, who is a travel writer extraordinaire for The New York Times, National Geographic, Fodor's, Forbes, and other publications, but had only traveled with a soft Travelon suitcase for all this time.

[For context, Sunkara is a carry-on type-of-gal, and usually prefers to travel with a carry-on and a backup.]

The devil is in the details, they say.

Like most Monos bags, the Hybrid Carry-On is made of polycarbonate; this particular model is outfitted with a water-resistant German polycarbonate hard shell.

The difference is that this suitcase is offset with an anodized aluminum frame and corner guards, lending a more premium look to the bag. 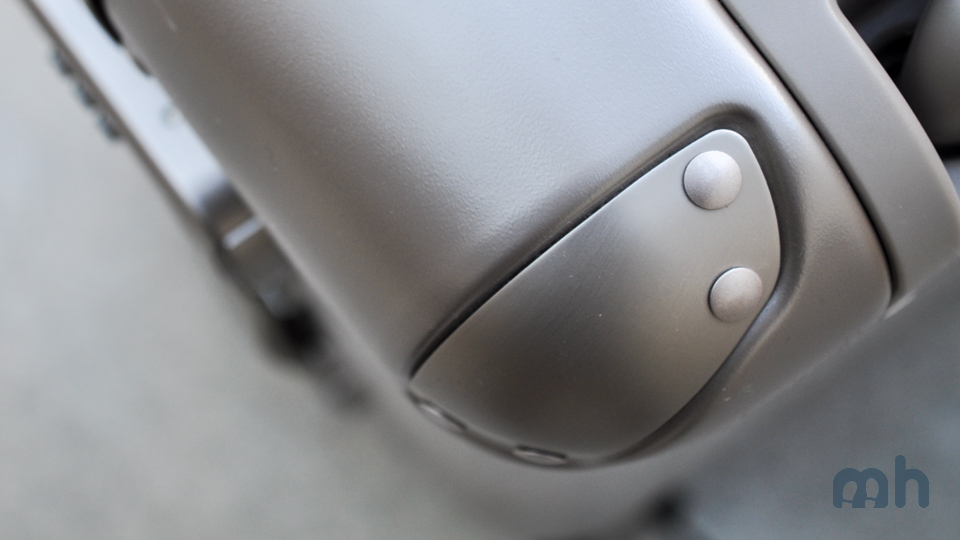 Cornered off with premium touches.

If you're talking about having the best of both worlds, it has all the advantages of a lighter frame with its polycarbonate construction, with the look and hallmarks of an aluminum case.

In our opinion, this is exactly what you want. Having owned dozens of suitcases (yes! this is what happens when you run a website dedicated to travel gear), our aluminum suitcase has collected dust under our bed for a few years (despite how great it looks).

Nothing against it: It just happens to weigh like a titanium log, making it difficult to lift into an overhead bin or cart around.

Furthermore, the Monos Hybrid Carry-On is equipped with Hinomoto Lisof Silent Run 360° wheels, and has has four adjustable height settings for its telescopic handle.

But also, like an aluminum bag, there is a lot less give1 than a traditional hard case.

It also locks more traditionally like an aluminum case: Instead of the traditional zipper which seals a typical polycarbonate bag, the Hybrid Carry-On has two TSA locks on each end and relies on both of these locks to seal it. (Neither of them ever popped off in our testing, even when it was checked and thrown into the cargo.)

Monos does throw in a lot of bonus accessories, so in terms of value, it is a great buy: Each carry-on comes with a built-in compression pad, an anti-microbial laundry bag, two shoe bags, an eraser (to clean the bag) and a vegan leather luggage tag.

Between the Hybrid Carry-On and the Plus

The price difference is slight between the two versions: Just $20.

Sunkara notes she was traveling regularly in addition with an duffel bag, which she would use to pack souvenirs. Upon returning, she would check the carry-on on the return trip.

"It doesn't fit more than what I take, basically." Sunkara notes. 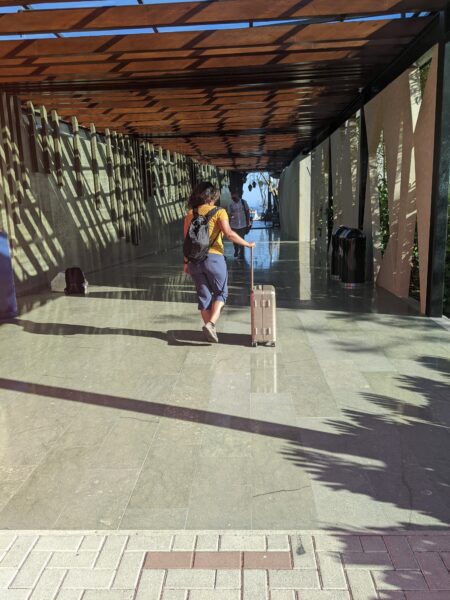 Sunkara on the road.

Strangely, Sunkara did notice that the bigger Hybrid Carry-On Plus was noticeably easier to maneuver than the smaller model. Our best guess is that weight was distributed more evenly across a larger surface area on the larger model, but don't quote us on this 😅

There are a lot of factors in picking which suitcase to select: How good you are at packing, how long the trip is, whether specialized equipment will be carried, and obviously your own personal preference for souvenir space.

But if you know you like leaving a lot of leeway for random things along the way, our suggestion would be to top for the Hybrid Carry-On Plus.

(Our personal style is much more minimalist.)

Taking it around the world, and beyond

Though, yes, we hired Sunkara for the purposes of this article, we left her mostly to her own devices.

In total, Sunkara took it to four countries spread out among three continents, transiting through eight different airports, spread out over 17,346 miles. Though most of it was in Latin American countries (with a smidge of Europe involved), Sunkara plans on continuing to take it on additional trips.

The turning point came around on a Switzerland trip with her husband; when they chose not to specifically bring their Monos bag, opting for a Tommy Hilfiger bag. They soon realized what a mistake that was.

It was there both of them realized the ease of the Monos bag around different terrain—carpet, cobblestone, whatever—and how little they had worried about lugging it around in general.

It was also there that Sunkara's husband bit the bullet and bought his own Monos Carry-On Pro Plus ($295). It's a "beautiful green," she notes, and he's already used it for a Vegas trip.

For the most part, Sunkara had a mostly overall positive experience with the suitcase, but a point of contention was that the Champagne color was prone to show its battle scars (aside from some of the problems most polycarbonate suitcases tend to experience over soft cases).

Since most suitcases always get dinged2, if scratches are something that bother you, choose the Obsidian black color.

The eraser provided will do a fair amount to clean the suitcase, but it won't get rid of everything. 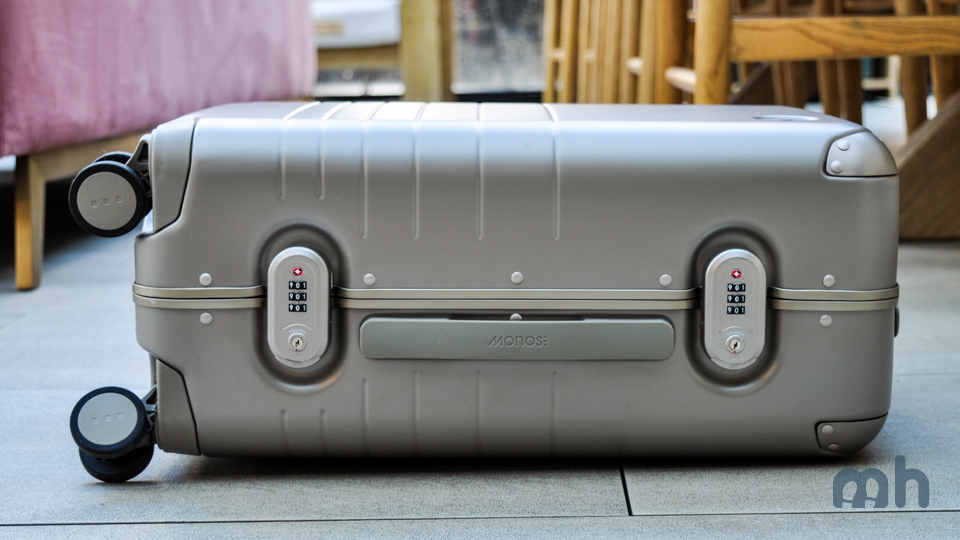 The two built-in locks were also well thought out: In addition to the locks being secure enough to endure being throw around in the cargo, they also turned out to be a nice addition when being left in an insecure hotel room.

(Sunkara was also to ditch her standalone lock, and just throw her valuables in the bag when she left the room.)

In terms of the interior, the Hybrid Carry-On has two separate compartments. One side is a standard zippered compartment; while the other one is an open compartment with a compression pad to hold things in place.

Both compartments are divided in the middle with a small, long zippered pocket that runs lengthwise to store dirty clothing or miscellaneous items. 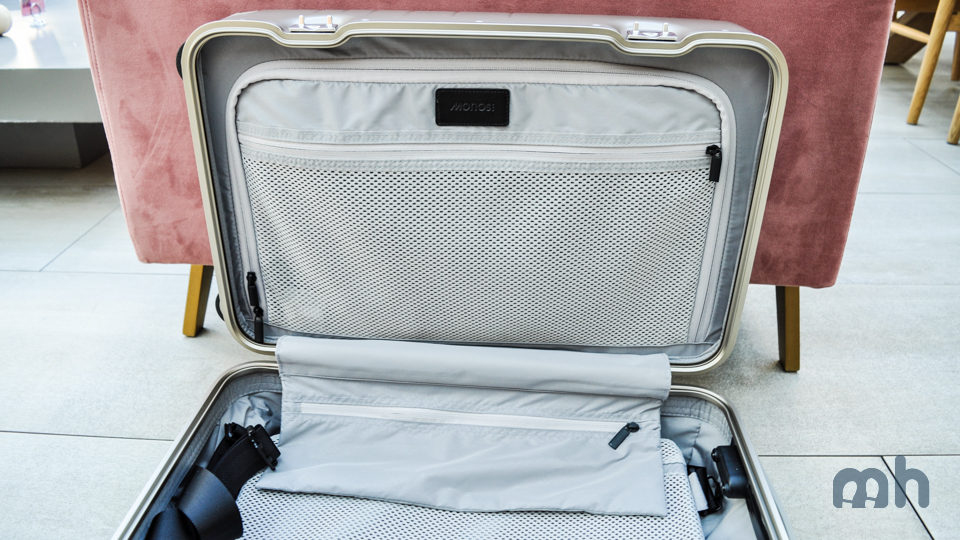 For the open compartment, in our opinion, its the best space to place packing cubes if you are a packing-cube type-of-person.

The compression pad also has zippered pocket, so it is able to function as a separate pocket on its own, though we would recommend placing flat objects, devices and paperwork here.

All in all, adding in the zippered compartments, there are four places for in-built organization, with a lot of possibility to freeform according to your own organizational habits.

Sunkara was particularly impressed with the design and security of the interior compartments, once she buckled everything down:

"Nothing really sticks out. Nothing comes out of it. Like even if my suitcase opens in the middle of the road, [or goes] bouncing down the road. I'm okay with that now, [given how secure everything seems to be]."

Isn't that all you kind want at the end of the day?

Check out the Monos suitcase.

The Monos Hybrid Carry-On hits the sweet spot — all without the weight and price of an aluminum suitcase, but with all the advantages of a polycarbonate bag.

It it also priced accordingly; if you're looking for a bag has a premium appearance without feeling like you're dragging a ton of bricks, this suitcase is hard to beat and a unique pick on the market.

Experience: Lavanya Sunkara has been traveling for over two decades, visiting numerous countries within six continents. She reports from all corners of the world, focusing on responsible tourism, sustainability, and conservation.

Fit on regional jets?: No


This product was provided as a press sample.