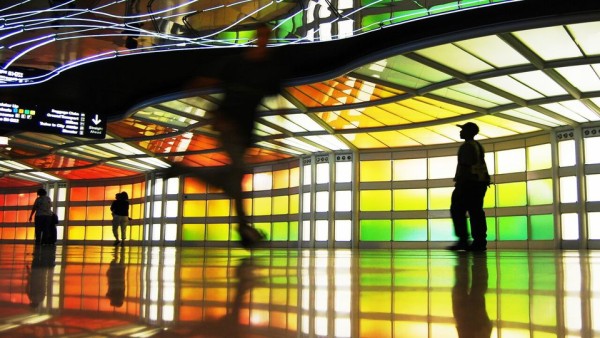 In the last couple of years, I’ve been getting really good at this. Sometimes, despite all of your best efforts, things happen and then you’ve just gotta haul some serious ass.

First of all, running through the airport is not romantic. It is stressful. Aside from never ever connecting through Toronto again, I've definitely run through my fair share of airports in the past few years. Twice, I got stuck in traffic en route to the airport, and twice because my incoming flight was delayed significantly. Whether I like it or not, you've got to realize there's an art to it.

Like I’ve mentioned before, you really want to focus on getting to the gate by the boarding time instead of the departure time. This is because the gates often close anywhere from 10-15 minutes before departure, and not all airlines will open the door to let you on the plane. (As someone who once was greeted by a closed door, while the plane still sat in the gate, and then watched it pull away in agonizing pain, I can rest assure you this is very, very traumatic.)

Clearing immigration and security before your flight are the trickiest bits. Really, the first step of action is to get into line and politely ask the person in front of you if it’s ok to skip, while quickly explaining the situation. Though I sometimes have gotten terse replies from other passengers in line, most people are pretty forgiving and will let you clear. I generally think it’s acceptable to ask — after all, I subscribe to the theory that you’ll never know when it’s your turn to be running or to let someone pass.

If you hit a bump in the line, you can directly appeal to airport authorities. Fortunately, there are often special access lanes reserved for frequent flyers and passengers that require special assistance. If your connection is tight enough—if all you can think is omg!—it’s not out of line to approach a security or customs officer directly. In a special case, I was once personally escorted by two customs officers through security and to my gate so that I could make my flight on time. (I was still pretty much sprinting after I cleared security, though.)

Once you’ve gotten past those two hurdles, it’s time to use your legs like God intended before you miss your flight. Not only you’ll realize how in or out of shape you really are, you'll also realize there’s not much you can do about your fitness level. However, the key to running through the airport is about conveying a sense of polite urgency. Dan Oshinsky sums it up rather nicely: you’ve got to look desperate, but still have your shit together.

…You want people to look up and instantly know which person is rushing to a flight. Your face needs say, Please, for all that is holy, don’t make me stay one second longer than I need to in this place. But internally, you’ve got to stay poised. I’ve seen roller bags go flying out of control in airports. Stay in control, and let your legs do the rest.

Using your vocal cords to let others know that you’re behind them is also another must. A sufficiently loud “coming through!” often works well enough, and alerts people that you need to get somewhere fast. The pot of gold at the end of the rainbow? If you stumble upon an airport official in a seated vehicle and they decide to let you hop on en route.

In super tight connections, every second counts. Generally, you can guess at what kind of rush you’ll endure before you even get to the airport. In fact, scoping out airport maps should be required homework in these cases, though it doesn’t hurt to alert the flight attendants if you have a tight connection. This allows them to do things like seat you up closer to the plane right before it lands, so you can be one of the first people off the plane.

In all honesty, half of the battle of running through the airport is all about the preparation. If you have a really tight connection or there’s a good chance that your incoming flight might be delayed—though it should go without saying—it’s always really smart to pack an emergency bag. Suitcases won’t help you here; what you want is something like a backpack to keep your hands free and legs mobile. Less bags is more.

The emergency bag should contain the basics in case you get stranded overnight somewhere: phone charger, toiletries, makeup, and at least one set of pajamas and fresh clothes for the next day. If there’s the chance you’ll be stranded twice, especially if you’re making a few particularly onerous international connections, I've gone out of my way to pack two sets of clothes. You never know.

Most importantly, don’t forget to dress the part and wear good shoes. That's kind of fundamental.