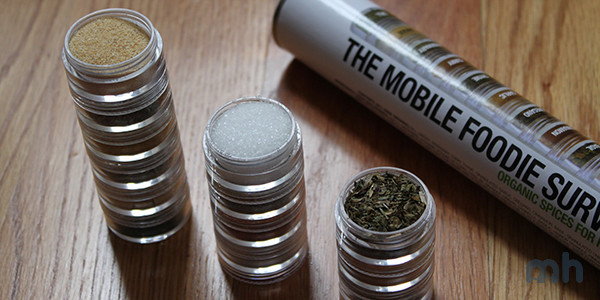 At first glance, the Mobile Foodie Survival Kit looks like another pretentious piece of Brooklyn hipster swag. Despite that, its actually a great spice rack if you're going away for extended periods of time.

It's probably because I travel so much that I'm absolutely obsessed with nesting. And nothing says nesting like a spice rack. In fact, one of the things I miss most when I’m traveling is the inability to tear into complicated gourmet dishes or a simple hearty meal to bring back the wonders of home. Mmm, bacon.

Now, just to give you an idea of how seriously I take my food, when my ex-roomie moved out, she accidentally nabbed my treasure chest of spices. Now it would have been different had she gone for the spatula, but I asked for the missing seasonings back by name when I discovered they were all gone. No one messes with my spices.

The Mobile Foodie Survival Kit is a travel-sized spice rack available for $26 through PLANT, the Brooklyn design studio that created it. It is also available for the same price through Uncommon Goods if you’re also getting something else from there. None of the current retailers that carry the product offer free shipping.

I was rather unexpectedly impressed when I handled the kit for the first time: it's a lot smaller than it actually appears online. Standing upright, the whole package is only a few inches shorter than the length of a standard letter size piece of paper at 9.5 inches (24.1 cm).1 It’s also just slightly taller than the width of a single sheet of paper. Without the outer tube, the rack measures at about 9 inches (22.9 cm) long and 1.5 inch (3.8 cm) in diameter.

Each package comes with 13 organic spices that include salt, black pepper, cayenne, onion, basil, cinnamon, oregano, garlic, thyme, curry, rosemary, ginger and dill. There's a decent range of seasonings, including some of the essentials such as salt, pepper and garlic while including some more flamboyant ones as cinnamon and ginger. Though exotic ingredients like star anise and cardamom aren’t covered in this kit, the fact that it includes everyday spices like thyme and rosemary make it extremely versatile.

In fact, the nice thing about each spice pot—though some people apparently see this as a con—is that each pot is unlabeled. I can already think of a great deal of customization I’d like to make, such as eventually swapping the onion, garlic and even maybe basil for other spices such as chili powder, paprika and cumin. Besides, it’s not that hard to buy fresh garlic, onion and basil at the store. The downside is that unless you keep the outer storage tube around, it’s impossible to know which spice is. It’s not that big of a deal though, since I'd assume you’d be keeping it around anyways to keep the spices fresh.

In fact, if I had to find something to nitpick, the biggest drawback was the fact that each pot on top acts as the lid for the pot below it. Though it seems nice that you can customize the size of the entire plastic rack, the main issues were opening and closing each specific pot to get to the one that you want. It does require a rather solid grip and if somehow you manage to lose control, sending spices flying all over the place could be a problem. Which, let's be honest, sounds exactly like something I would do in a fit of clumsiness.

The outer package claims that each pot holds about one tablespoon (while Uncommon Goods claims its 1.5 tablespoons) but I needed to set the record straight. Curious, I took out some measuring spoons we had around the house to see how each much seasoning each pot really held. I sifted through the garlic and found that neither claim was true: each pot holds approximately 1.5 teaspoons, which is about half of one tablespoon. I was actually a little bit disappointed to see that the manufacturer claims weren't true.

That would actually be a fairly sufficient amount for most recipes, though a few recipes—especially some of the bolder dishes—might call for more especially if you’re cooking for a large group. I would daresay that the chances are pretty high that you won’t be able to use that particular seasoning more than once on a single trip. In this case, it doesn't seem too hard to replace each spice with those from your existing spice rack. Thankfully, unlike baking, cooking is a forgiving art. 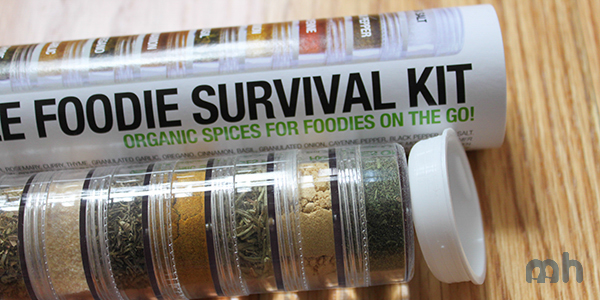 The cannister aligned with spice pots and lid; there is some empty space in the tube.

The packaging does note that the freshness of each spice can last up to four years, though I really just don’t have that much time to sit here and wait around to check. In fact, the accompanying tube does a nice job of serving the double purposes of keeping them fresh in a dry, dark place while also keeping the spices secure. The spices generally fit into the tube pretty well, except for the fact that there's some empty space (about .625 of an inch, to be exact) between the plastic pots and the lid. I would have preferred no wiggle room just so I wouldn't have to worry about the pots shifting up and down.

Now let’s get down to the nitty gritty and see how much each spice costs. Thirteen spices for $26 essentially breaks down to $2 per unit. Sure, that’s really expensive considering I can probably pick up ¼ pound of turmeric in the East Village at that price. To boot, the Trader Joe’s spices, which range from 1.5 ounces to 1.8 ounces, also typically sell for that price. Don't get me wrong—you are partially paying for the packaging—but at least the nice thing about the kit is that it’s preloaded with spices you may or may not have.

PLANT also offers four other types of smaller spice collections—Italian, Thai, Mexican and Indian—in tubular form. They consist of nine spices that pertain to each cuisine, about four less than what you get with the Mobile Foodie Survival Kit. While they do cost slightly less than the larger collection at $20, they are also slightly more expensive when you break the cost down for each pot (about $2.22 each).

I mean, there are a lot of reasons not to go the Mobile Foodie Survival Kit. Do you think I will really just give up my travel towel just for a tube of seasonings? (Oh ok, I might.) But honestly, I wish I had made the purchase a lot earlier instead of holding off for so long. There were a couple of times, especially during San Francisco and Australia, places where I stayed for a few weeks, where I would have killed for a spice rack like this. It’s not even about being economical; its about having a greater control over your diet.

It's also pretty much perfect for the next time you go over to a friend's to cook, since not all kitchens are created equal. Glamping up the outdoors, extended trips and, most of all, vacation rentals all stand to benefit from the Mobile Foodie Survival Kit. It's a pretty inefficient proposition to buy separate spices on each excursion even if all you need is some basic salt, thyme and dill. Besides, am I really going to out of my way to pack all of that? 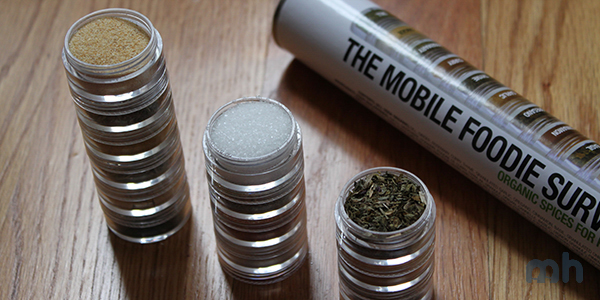