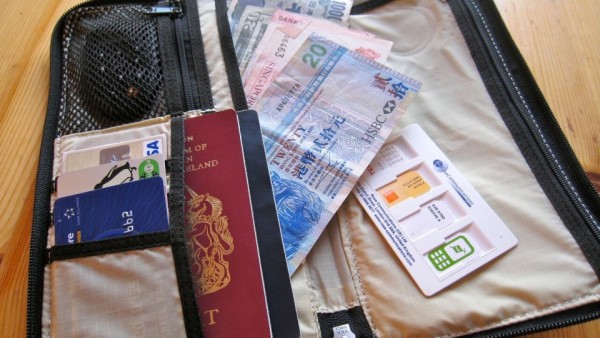 So just about the only thing I’ve learned from this is that figuring out what to carry in your wallet is more art than science.

There's not much I change about the contents of my wallet when I travel abroad; if I do make a change, it’s usually to swap in a new metro card if anything. But generally, I take the whole shebang. (I did have one guy call me crazy once but my thinking is that the credit cards are usually easy to replace and I rarely carry large amounts of cash. I don’t see it any differently than losing your credit cards at home.)

Personally, I think it’s always a good idea to bring at least one credit card and one debit card, followed by a backup for each card, making it four cards total. Unless I plan on driving abroad, I’ll tuck in a spare, expired driver’s license as a backup form of ID. In retrospect, though, I should bring more spare U.S. cash than I usually do, which is usually nothing. But maybe I try too hard to be the antithesis of paranoid.

But I have no idea what other people do. To see if I could suss out some practical gems, I decided to round up a couple of hardcore travelers and asked them what they usually bring in their wallet with them on a trip. And interestingly, enough, no two answers were the same. But then again, everyone has different levels of caution.

Not everyone likes to attach their name to a blog post, so I’ve used the cities they live in to differentiate the answers. What do you like to carry in your wallet?

I take out everything unless essential. What is essential? At least 2 credit cards, at least 2 ATM cards (I have 2 bank accounts) and at least $150 or so in US$. I also take my driver’s license, which I think might be useful if I lose my passport and I need to go to the embassy and prove who I am.

I usually keep two separate bags and some emergency cash in a tampon. Before you look at me like that, I do that because most people wouldn't want to go near that kind of stuff.

I also keep one form of ID, some cash, or one debit card or credit card in my day-to-day wallet. I may even bring travelers' check in my emergency bag. Truth be told, it really depends on where I'm going.

I travel with a bank card to withdraw money, a credit card and a driver's license for ID. If I go out at night whilst travelling, then just cash and a piece of ID.

When I travel I usually load a money clip up with:

The front gets stocked with cash from whatever country I'm visiting as soon as I hop off the plane (withdrawn from an ATM, not from a currency exchange stall).