Our brand new Snapshot series that covers the most important, quick-hit info about a destination so you can dive in as quickly as possible. First up is Argentina, that beguiling South American country where I set my post-collegiate sights.

It’s been almost exactly four years since I first arrived in Argentina. These days, I like to think that benchmark means I’ve now earned another Bachelor’s Degree, this one in Porteño Studies, or my “BA in BA” as one friend punned. (Porteños are Buenos Aires denizens.)

Blame Hollywood if your expectation for Argentina involves someone clenching a rose in his teeth, wrapped up in a woman while tangoing. This place is heady in the best way with its rich, nostalgic culture and non-stop socializing from multi-hour meriendas, tea time, where no waiter will ever rush you out to the relentless, welcoming nightlife. Be prepared because this place pulls people in. I’m proof of that.

Need to know the visa situation or what that wad of cash in your wallet is worth? Where the locals source their places to eat? Where you actually eat, sleep and play is up to you, because we just couldn’t take the the best part of planning away from you. 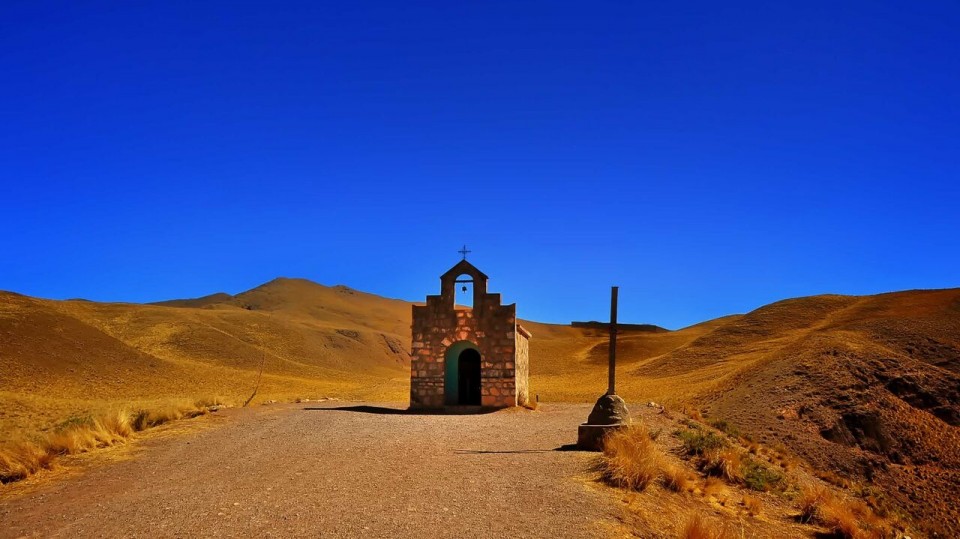 Spanish is the tongue but this isn’t going to be the high school español you learned. To start, the accent is unique and the “you” form of verbs are conjugated with a different twist (tú tienes is vos tenés, for example). There are entire dictionaries dedicated to lunfardo or the slang that is much like a mash-up between Spanish and Italian. That said, everyone will work with you speaking neutral Spanish. Many people can and will try to talk to you in English.

Argentina is so centralized in and around its capital city of Buenos Aires that there’s a saying that goes, “God is everywhere but he only tends in Buenos Aires.”

The country’s major international airport is Ezeiza/Ministro Pistarini International Airport (EZE). It’s located about a 40-minute drive — on a good day with little traffic and no protests blocking the streets (which are frequent). There’s really no public transit to speak of that will get you to/from the airport, so you’ll have to shell out for a taxi or car at the airport. Taxi Ezeiza is the official ride. Tienda León will get you into the city with a combination of a bus plus taxi and is the most budget of the legit options. Aeroparque Jorge Newbury (AEP) is the capital’s regional airport.

If you’re from the U.S., Australia or Canada you’ll have to pay a reciprocity fee of $160 online ahead of time. Here are directions and links. The fee is good for multiple entries over 10 years. Really though, make sure you’ve paid the fee and have the paper to prove it before you leave for the airport because airline staff won’t allow you on the plane without it. While it used to be that you could skirt the fee by riding in on a bus or landing in any airport but Ezeiza, word on the street is officials everywhere are checking you’ve paid.

The Subte (subway) and colectivos (buses) will get you just about everywhere you need to go in Buenos Aires. Taxis are always around. Those labeled “radio taxis” are the safest. The city also is easy to bike; firstly because it’s flat and also because it is transected with bike lanes that are often protected with a curb from vehicle traffic. 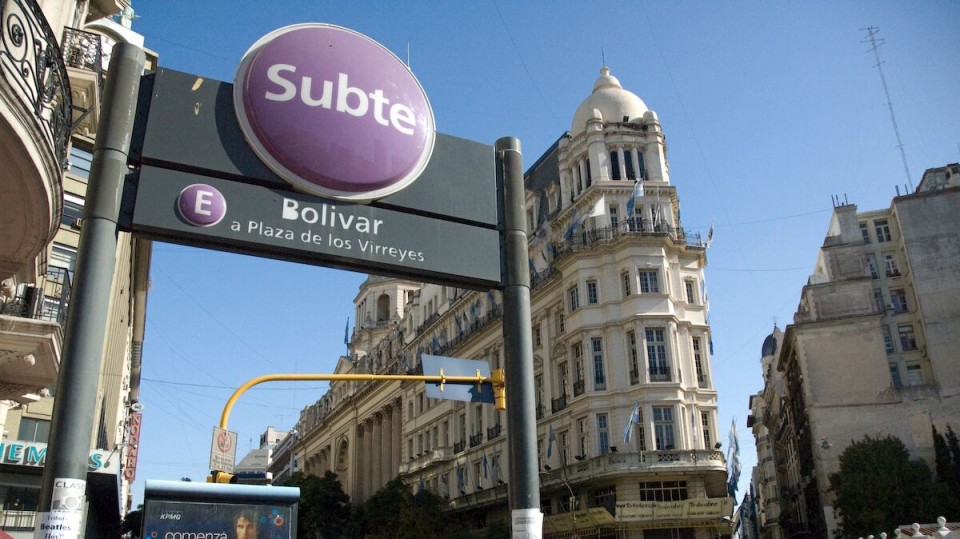 You’ve got to get around Buenos Aires somehow. (You Need Style / Flickr)

Buses are often the choice of transport for everyone from families to backpackers. Double-deckers come in and out of Buenos Aires’ Retiro bus station at all hours and have routes across the country and beyond. Whether the price is right—buses generally are much cheaper than planes—for you to spend about 25 hours rolling along to reach Bariloche in Patagonia from the capital is up to you. (After doing that once, I decided my max ride time would be an overnight ride from Buenos Aires to Mendoza or Cordoba, both about 11 to 13 hours. But, hey, experience.)

Aerolineas Argentina is the subsidized national airlines. Even though fares are as cheap as they can get, most people (hand raised!) avoid the carrier because of its dogged habit of delaying or canceling what seems like every single flight.

Argentina is currently in default so the Argentine peso is in the dumps. (If you’re interested in learning more about the country’s current money problems and how that can affect tourists, here’s a piece I wrote for Thrillist on the subject.)

So, how much is a dollar worth? That depends if we are talking about the official rate or the black market (called the “blue dollar”) rate. And that changes every day, sometimes jumping week-to-week. Reference Dolar Blue to see the rate du jour.

If you bring money in cash, it goes much farther because you can sell your bills at the unofficial rate. Think about it, all of a sudden your $100 is worth $1,500 pesos rather than $839. Cash really is your best bet because it makes your money is worth considerably more. (If you withdraw from an ATM or use a credit card, you’ll be at the official exchange rate.)

Though it’s a common practice to sell dollars and Euros, it’s technically illegal. Pop into a place that looks like it would exchange money like a Western Union and ask discreetly; chances are you’ll be walking out with pesos for your dollars. You also can head to Buenos Aires’ main pedestrian thoroughfare where you’ll hear huskers calling out about buying and selling dollars and Euros.

It’s a guessing game as to whether a store or restaurant accepts credit cards. Many of even the most serious-looking restaurants will be cash only. Even if stores do accept credit cards they often offer a discount for paying in cash.

It’s common courtesy to leave about 10% tip in restaurants. When Argentines are miffed about the service they’ll leave a bit less. Keep in mind that even if you pay with a card you have to leave the tip in cash.

In taxis, the driver will usually just round the right to the nearest 50 cents or peso — no one tips in taxis. Tip hotel staff as you would anywhere.

Argentines greet (saludar) and bid farewell to each other with a kiss on the right cheek, though in formal business settings they might extend a hand. They take the time to give the hello and goodbye beso to each person in the room, even, as I’ve learned, if there are 20 people because it’s considered respectful.

They also tend to have formal, British-style table manners. (Along with the Spanish, the Italian, French and British also have had substantial cultural influence on this Southern country.) Meals are consumed with the knife in the right hand and fork in the left, tines down. 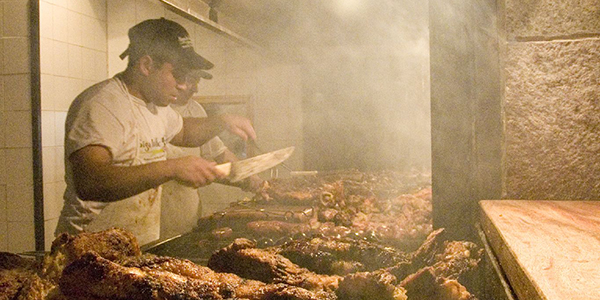 Don’t come between an Argentine and his steak. (audrey_sel / Flickr)

Steak and wine really are that good here. Mate, which is a loose-leaf tea made from yerba, is the caffeine kick for most. People drink it day in and out day — it’s what’s contained in those gourds everyone is sipping from with metal straws and passing around in parks. Argentines are also the world’s leading consumers of Fernet, which they almost always mix with Cola. Dulce de leche, that ambrosial, creamy caramel-like sweet, is worked in wherever and whenever possible. This includes pastries, helado (ice cream) and desserts.

The site everyone consults when scoping out a restaurant and where they leave their good, bad and ugly reviews is Guía Óleo. (Note: The price estimates they have listed are impressively accurate.) Pick Up the Fork is a top-notch, long-running food blog in English that dishes real talk on restaurants in Buenos Aires (and wherever the author travels). Once you’ve picked a place, Restorando is an easy way to make reservations online without having to stumble through Spanish on the phone or reserve without a concierge.

It’s safe, so you can drink it from the tap but not delicious, so most people have filters in their homes or purchase bottles.

In the big cities small businesses close in the early afternoon for the sacred siesta (in reality a long lunch break) and most everything is closed all day Sundays. In smaller towns expect everything to be closed during both that afternoon lull and on Sundays.

At night, most restaurants don’t open until 8 p.m. for dinner and Argentines dine starting around 9 p.m. If you’re looking to go out, on weekend eves bars start to fill only around 11 p.m.

Argentina is a Catholic country, though not particularly conservative. Also, everyone—really, every single Argentine—loves the Pope. The other religion? Fútbol. 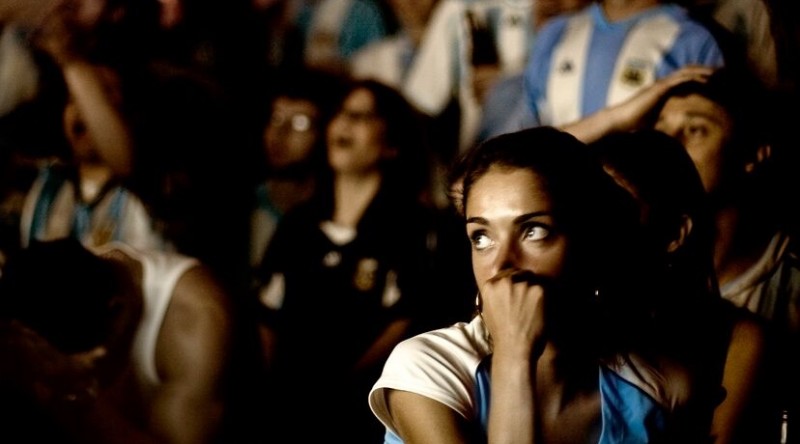 Argentina is one of the world’s most active countries on social media, so suffice it to say you’ll find Wi-Fi to be widely available. The country code is +54. Popular mobile carriers are Claro, Movistar and Personal, and you can buy prepaid SIM cards and top them off at kioskos, small convenience stores open at all hours.

La Nación and Clarín are the most widely circulated newspapers while the Buenos Aires Herald is the local English-language daily. The Bubble covers news and culture out of the country in English and with some sass.

Petty crime is lamely prevalent in Argentina and tourists and locals alike are targets. Leave your even-somewhat flashy jewelry at home. Always keep your purse and your bag in your lap when you’re at a restaurant and don’t leave your phone or camera sitting on the table. If you want to bring your laptop somewhere to work, just know that thieves really are brazen enough to march into the back of a cafe, grab a laptop and sprint out.

Beware this common scam: One person squeezes an unsuspecting person with some liquid to catch their attention about “bird poop” or whatever excuse they give. While the target is wet, distracted and confused, the person’s partner is pickpocketing. People often work in duos on motorbikes, too. Sometimes the person on the back is grabbing a phone that’s out while the bike flies past or one person is robbing the victim on foot with escape moto reinforcements ready. Keep your gadgets tucked away as much as possible to avoid being a victim of this grab-and-go.

European pin or Australian-type plug. It’s a crapshoot which you’ll actually have. If you’re lucky it’ll be a plug that fits both.