DEAR ABBY, there are so many rude passengers over the holidays. How do I prevent myself from becoming like one of these terrible people? Is there a way to deal with them? — Frustrated at LAX

The best way to deal with rude strangers at the airport is to set an example for others. This includes educating yourself on the do’s and don’ts. But quite frankly, the problem is that you just don’t know what to do until you see the don’ts.

The airport is a terrible place to be during the holidays. Realize though that there isn’t much you can do when things get rough at the airport, except to handle it with grace, and know that everyone is trying their best to make it home on time. Many things are beyond our control, like flight delays, but a lot of it is, like whether we decide to fight over reclined seats.

Though it’s easy to make fun of Chinese tourists behaving badly, just as much fault can be found close to home. For examples of what not to do, I suggest checking out Passenger Shaming and Expedia’s Airplane Etiquette Study for 2014. (Play Bingo using this quick visual guide. Something to pass the time!)

Give the gift of consideration. 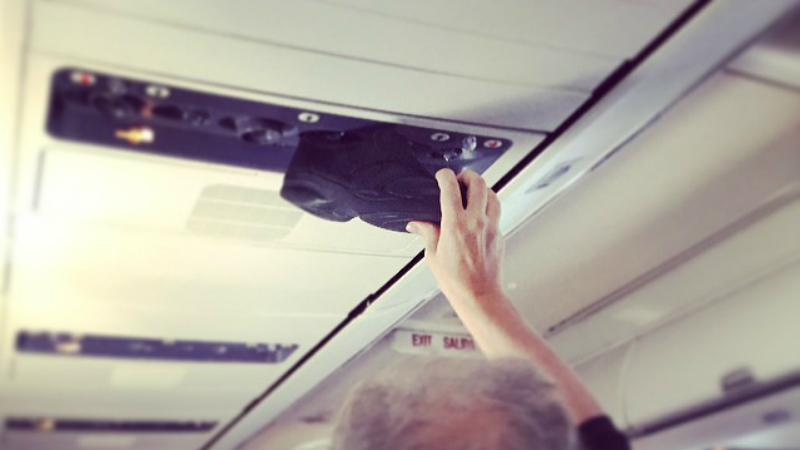 Cause airing out your shoe is completely normal. (Passenger Shaming / Instagram)

Be ready for the security line before the conveyor belt. You know that you’re going to have to pull out your liquids and take off your shoes if you’re not in Pre, so why not start removing your coat and things when there are only one to two people ahead of you before it’s your turn? This is the reason why I always pack my liquids and laptops in an extremely accessible spot.

Don’t take your belongings and put them back on immediately. Take your belongings, move to the end of the conveyor belt and get out of people’s way so they can grab their bag. It’s courteous to move to a bench or to a spot away from the horde of people to reassemble your gear/clothes before you move onto the gate.

Luggage does not belong on seats, especially at the gate. Luggage do not have derrieres, human beings do. It’s even worse when others can’t sit because of it! (Though I absolutely have no problem asking if I may sit there in place of that purse.)

Please refrain from lining up until the gate agent makes an announcement to do so. Everyone has been trained like cattle to line up in this day and age to fight for overhead bin space but, really, there’s no reason to do it, like, an hour before boarding. It’s designed to be a civilized process so be respectful of the line. (Two passengers kept trying to jump me in line once, throwing their status around, when my mobile boarding pass flipped out. The gate agent ended up shaming them.)

Respect thy overhead bin. Don’t take up huge amounts of overhead storage space with coats strewn about. Leave space for others. At the same time, please also don’t take it upon yourself to move everyone’s stuff around…. how would it feel if someone moved your bags all over the place?

Spare the flight attendants and don’t hit the call button repetitively. Flight attendants have a hard job so if you want to do them a favor, you can go back to galley to ask for your water and whatever else you need if you need something frequently from them. Exceptions apply if you’re trapped by the window seat.

Keep the personal hygiene at home. On the plane is not the time to start clipping nails or taking off your socks and putting bare feet around people who can’t escape it. 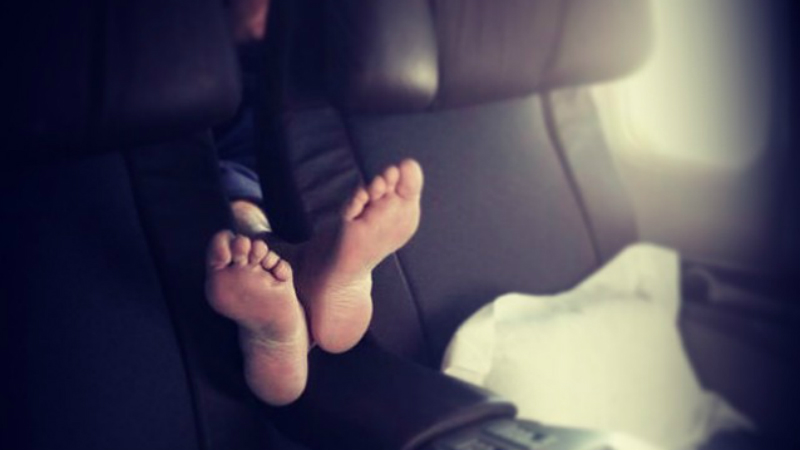 This is why I carry travel socks with me. (Passenger Shaming / Instagram)

Realize the power of the window seat. With great power comes great responsibility. You’re absolutely permitted to get up, walk down the aisle and use the bathroom. But please realize you’re inconveniencing the aisle and middle seat each time you do this, so make the most of your time on foot. (Please just don’t jump over people in their seats to get to their aisle. I am happy to get out of my seat and into the aisle so you can leave…. and curling up into a ball in my seat while you brush by me just makes me uncomfortable.)

Exceptions apply if you need to use the loo a lot but be aware of your liquid intake. Still, I’d rather you take care of your bodily needs than take care of them elsewhere. However, to be courteous, if it’s going to be an issue, politely explain the situation to fellow seatmates. Most people in the aisle probably wouldn’t have an issue switching just to prevent the inconvenience of getting up all the time.

Special rules also apply to deplaning. There’s no way you’re going to get your baggage before the person in the aisle or middle (and please don’t expect to). If you’re asking for it anyway while everyone is still getting their stuff, you’re just being rude. Getting your bags .5345 seconds before does not actually mean you will get to deplane .5345 seconds earlier than everyone else.

If there’s a free seat, it’s possibly common space. That means if the middle is empty, you should ask the person in the aisle/window if it’s okay to stow your bag underneath the empty seat or use that seat’s tray table and leave some space for the other person. They are just as entitled to it as you are. It doesn’t hurt to be courteous while divvying up the territory.

But there are other things that are not common space. Like my tray table.

Every time that tray table is up, down, locked, unlocked with anything more than a light touch that person in front feels it. Pick a tray table position and stick with it. (This also goes for kicking the seat back— repetitively.)

Smelly food is just not OK. Nor is anything odorous for that matter either, like nail polish. I was once on a flight from Beijing to Los Angeles when someone grabbed something putrid from one of the overhead bins, stinking up several rows. It was the first and last time I saw a flight attendant walk down and up the aisle multiple times spraying air freshener like it was her sole mission in life. 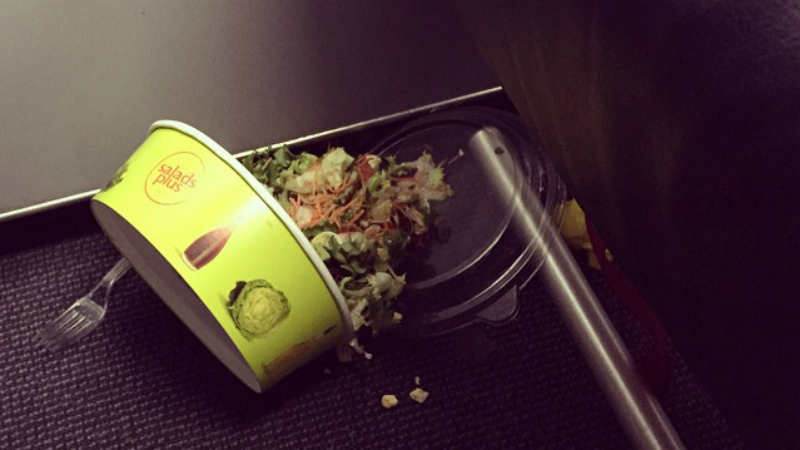 Hey, I think you missed the tray table there. (Passenger Shaming / Instagram)

Drink if you want but please hold your liquor. Unfortunately, some people have been there and done that. The nice thing is that once you do it one time, you never do it again.

It’s great to enjoying that movie but it’s a little unnerving for the rest of the plane to hear hysterical laughter when it’s lights out time. Or never give that conversation a rest. Public transportation rules apply here: minimize the chitchat and maximize the quiet time before 10 am and after 10 pm. In all cases you must use headphones.

Let people that have tight connections deplane first. This is something I have seen airplane cabin crew request over and over again when flying to a major hub with delays. It always seems like a race to who can get off the plane first but the truth is if this is your final destination, you have more time than other people who are connecting at the airport. Delays only exacerbate that. Besides, you never know when it’s your turn to be stuck with the tight connection.

Pauline Phillips, who wrote under the pen name of Abigail van Buren, originally died in 2013. She did not write this but I’m sure she would have in the name of proper travel etiquette.