Gary Leff is one of those people who makes things happen. And by things, I mean trips.

Though aside from being a frequent flyer expert and a co-founder of Milepoint.com, he is actually also, oh so you know, a chief financial officer for a university research center. But for the most part, he lives trips others only fantasize about: being upgraded to international first class, pajamas provided, all the way to the Park Hyatt Hadahha in the Maldives. (His personal favorite.)

He also manages to look like he’s everywhere at once. Except the thing is, he actually is everywhere at once. He’s writing at View From the Wing, being quoted in The New York Times, and appearing on TV while all discussing miles and points. This is the guy to follow for juicing reward and frequent flyer programs for all they’re worth. He’s, shall we say, a rewarding person to follow. 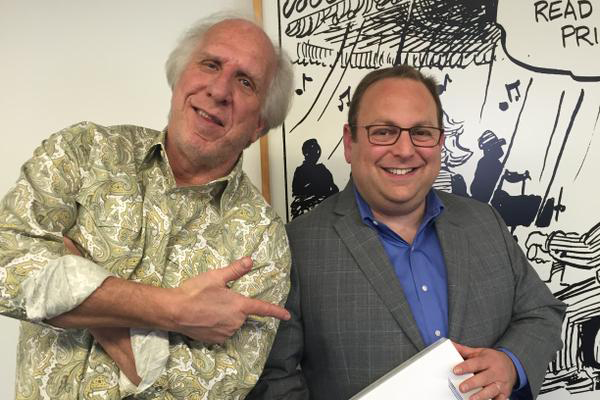 Current Location: Austin, Texas
Current Gig:  I’m CFO for a university research center, author of ViewFromTheWing.com and Conde Nast Traveler lists me as one of their “World’s Top Travel Specialists” for my BookYourAward.com service which helps people use their miles to get the trips they want.
Last Trip: I’m two weeks back from the Maldives, two days back from DC, and three days from leaving for Australia.
Annual Mileage: 200,000 including both paid and award.
Preferred Alliance: oneworld for first class redemptions and lounge access but Star’s route network is unparalleled.
Frequent Flyer Program: American AAdvantage Executive Platinum, a variety of other status and member of most.

What do your travel patterns look like? Are you always going to the same places or going somewhere new?

I fly 120,000+ miles domestic, often to places like New York and Miami. Now that I’m living in Austin I travel to DC monthly for work. Internationally, I rarely visit the same place twice within a few years with exceptions for Hong Kong, Bangkok, Singapore, Kuala Lumpur and the Maldives.

What are some of the things that you will absolutely not go on a long-haul flight (8+ hours) without? Do you have any routines for long flights?

I board the plane and change into pajamas, either airline-provided PJs in international first class (or with the few airlines that give those in business) or I bring my own. I’ll usually try to bring a pair that matches the airline I’m flying, though in a pinch, my American Airlines pajamas are the most reusable. I want to get comfortable quickly.

I bring my own entertainment and rarely use an airline’s video-on-demand capabilities. So I load up TV shows onto my laptop, whole seasons of the best shows. I rarely watch at home, saving them for the plane.

I also bring along my noise-canceling headphones and power adapter if my flights won’t have standard outlets. And a change of clothes to shower in the airport at my connection.

Is there a favorite airline? Is there an airline you wouldn’t touch with a 30,000-foot pole? Share your most memorable flights—both best and worst.

My favorite airline domestically is American. Top elites are usually well-assured with an upgrade. Great staff in several of their lounges keep me moving during irregular operations and planes have consistent Wi-Fi access, though connectivity is less widespread in regional jets than with Delta, and slower than Virgin America.

My worst flights were circling New York air space as a teenager because the plane’s landing gear wouldn’t go down; inability to get much water out of Air France crews (it’s a cultural thing…); unprecedented transatlantic turbulence flying Alitalia in 2007; and a six-hour diversion to Richmond due to low fuel on a Los Angeles–Washington Dulles flight after having flown to LA from Sydney.

How far ahead of time do you usually plan your lodging and how do you go about selecting?

I book hotels when I buy my airfare. That way I know it’s out of the way and I don’t have to think about it again. But I’m allergic to prepaid rates and tend to re-price my reservations to look for savings.

My rubric for selecting a property is: (1) price, (2) brand [can I leverage my elite status with Hyatt or Starwood? If not, Hilton is preferred; and will I earn credit towards re-qualifying for Hyatt or Starwood status?], (3) location.

My best advice is that when you don’t get the answer you want from a travel provider, hang up and call back. Don’t ever try to educate an agent about the rules if you have the option of speaking to someone else. A corollary of this is to be nice, because an agent motivated to help you will get you a whole lot farther than one who just wants out of the interaction quickly. Sympathy goes a long way.

The best advice I ever received was a company may seem large but it’s people you’re dealing with. Rules and status may set the parameters or be the excuse to help but gaining the sympathy and trust of real people is key to getting above and beyond service that improves the travel experience. Take care of your agents and they’ll take care of you.

How do you beat jet lag?

The simplest idea also works the best: Stay up until normal bedtime at your destination or even a little later. If I arrive somewhere in early morning or even before noon I may allow myself a short nap but I’ll set the alarm and force myself up and out of the hotel to dinner. I won’t have slept enough and I’ll go to bed when the locals do, usually then sleeping through the night.

What’s one phrase you try to learn in every country? Do you use any language apps or tools while on the road?

Traveling the world I’m actually very lucky to be an English speaker because except in the most remote places I can usually get by. I was never a great language student in school. My phrases are usually limited to “No hablo español” and “Gracias” or their equivalents.

How do you generally get around the places that you visit? What modes of transport do you usually use and how do you map out getting around?

I carry an unlocked wireless router and so have internet wherever I go. As a result I have access to Google Maps on my Android phone.

In Paris, nothing beats the metro. In Bangkok the BTS is a must because I don’t think I’ve seen worse traffic anywhere in the world — although Ho Chi Minh City’s motor bikes are more intimidating as a pedestrian.

Often times I’ll hire a guide, at least in the less-expensive parts of Southeast Asia, one tout to keep away the rest of the touts. It lets me get beyond the city center easily and I can see things far more efficiently than if I’m trying to find my way.

How do you stay connected to people on the road? Is there a particular mobile carrier you use?

Since I carry an unlocked wireless router I can Skype easily from my phone. I also have an unlocked cell and if I’m not going to be in one country for an especially long time I just use onesimcard.com’s SIM which gives me reasonable rates most of the places I go.

I don’t have a bucket list. I’m not checking boxes. I go to interesting places, I don’t try to force everything in while I’m there. If I like or connect with a place I’ll go back. Often my trip choices are driven by special airfare deals, meeting up with friends and family, or experiencing one specific thing. I do have an interest generally in seeing more of Northern Europe and Central Asia.

Each of the past four years I’ve gone to the Park Hyatt Hadahaa in the Maldives. It’s precisely how difficult it is to get there—flying to the other side of the world to Male, followed by a domestic flight and then a speedboat—that allows me to step into a different world. I need to be that far away to really disconnect. And the time difference helps, too, because I’m waking up as the business day on the U.S. east coast is ending and I have the whole day ahead undisturbed.

It’s a remarkably beautiful setting with friendly people and great food, and remarkable sunsets I can watch from the beach with a cocktail in hand.

Fill in the blank.