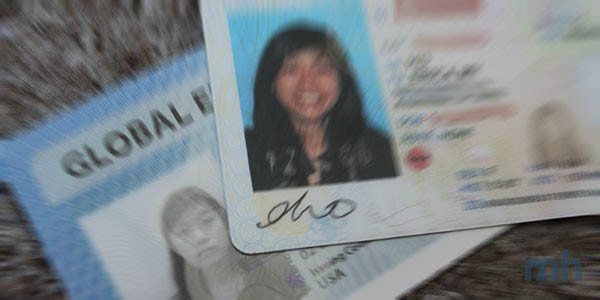 That means if you’re a Global Entry member, you can show them that card instead of your driver’s license at the security checkpoint. It also reinforces the point that you belong in PreCheck. But maybe that's just me because no one ever believes I belong in the PreCheck lane.

The TSA lists the Global Entry card as a valid form of identification accepted during screening procedures on their website, even though you may get questioned in real life according to the Savvy Traveler. (To be fair, that article was published almost three years ago! Things have certainly changed since then.) To be absolutely sure, I emailed Lisa Farbstein, a TSA spokeswoman, who confirmed the fact.

Personally, I’d probably prefer to use my Global Entry card because it minimizes the risk of losing my driver’s license which I, ironically, am more averse to losing. My reasoning is that I’ll probably run into more instances where I need my license. I still probably need to drive a car way more frequently than I cross a customs border. Imagine that.

The bad news is that even though it’s a valid piece of identification, not all places will necessarily know and recognize that. (Don’t expect the local pub pub to recognize it as your right to drink a cider.) But if you’re at the airport, anyone knowing worth their salt in the transport industry should have a basic understanding of the Global Entry program.

Just another reason to sign up if you haven’t already.