When I hear about people mileage running, I want to wince. Who wants to spend six days in the air just to gain status?

To the uninitiated, a mileage run is a flight someone will take so that s/he earns miles to ensure they reach status with their airline program for the next year. Sometimes a mileage run’s secondary purpose is to stock upon frequent flier miles but that isn’t always the primary consideration. FlyerTalk has got a whole section dedicated to it and the best deals are often those that cost around 4 cents per mile or less.

Airline status is achieved when a traveler accumulates enough actual in-flight miles—not through manufactured spend—to reap particular benefits like free cabin upgrades and lounge access. Gabriel Leigh made a great documentary about this a few years ago.

For most people, this sounds crazy. Because it is.

But it also isn’t.

If you only fly about 25,000 miles a year and don’t see your travel patterns changing anytime soon, then I say it’s probably not worth it for you. But if you fly at least close to 40, 45,000 miles per year, it might be worth the hassle depending on whether you plan to keep up a similar flying pace the next year.

Travel patterns are a big deal. I might not go the extra mile if all I’m going to do is hang out is not get access in the LAX lounge heading to Phoenix but if I’m doing a lot of international travel, then the stakes change. I’ve always thought the best status benefits aren’t the free upgrades but the amenities that you get when you travel long-haul. It’s the little things like a quick shower in the lounge that can make a huge difference in terms of comfort. Most people don’t travel enough to justify or appreciate the benefits but the longer and more you travel, the more the discomforts accumulate.

What your plans for the upcoming year are just as important. Will you be around to take advantage of that status? If, all of a sudden, I plan to start a family in the next year, you can bet the farm that I’m probably not going to be crazy about trying to reach Platinum for the next year. My focus is going to be elsewhere.

Since everyone’s needs are so individual, I decided to go ahead and make a flow chart to help clarify whether a mileage run is worth it. Pretend this is Monopoly and start in the upper-left corner. 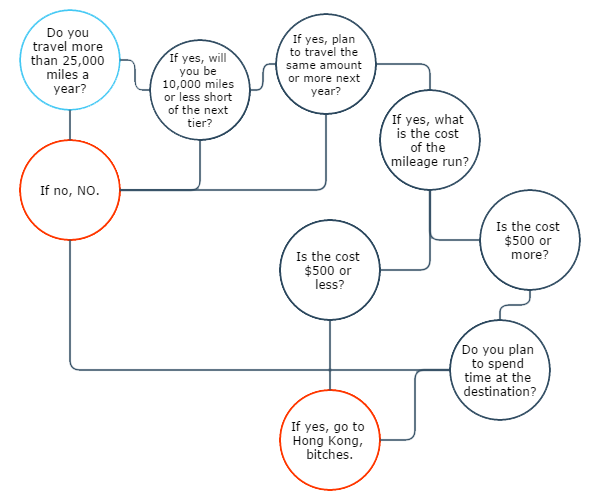 Clear things up a bit?

The last mileage run I did was back in 2011 when I was still living in Hong Kong. I had done some quick calculations and realized I would be a mere 5,000 miles short of reaching Gold by the end of the year. Luckily, Singapore was a cheap trip away—and more importantly would credit over 3,200 miles to my account—and close enough that I could make a weekend trip out of it. So for that week, I endured four hours each way and filled up on as much roti and laksa as I could. I made up the remaining miles with a couple of short trips within the United States.

Since then, I’ve had a lot of time to reflect on it. To this day, I feel strange that I deviated from my own personal habits to achieve something that sounds ridiculous to most people. It ended up being worth it, though. I ended up traveling over 100,000 miles the next year and the status did a lot to make flying that kind of brutal mileage significantly more comfortable. It could have easily been a much more horrendous 100,000 miles without it.

Then last year, I found myself lacking in mileage again. I stumbled across an incredible deal to Bahrain (from LAX) that would have helped me reach my status of reaching the next tier. But something nagged me: I wanted to be in control of my own life, not be a slave to some airline. These days, I draw the line at flights more than five hours or so in length. Maybe I just have more perspective the older I get but it’s also about being reasonable.

It’s important to note that mileage runs, for better or for worse, could soon be a thing of the past, at least when it comes to many of the North American frequent flyer programs. Many of the airlines are moving toward a spend-based model, with United making the change in June. Probably the only last major carrier that hasn’t done it is American Airlines but most industry experts suspect that the carrier will eventually follow suit, if not later.

(To be honest, though, Americans can still sign up and earn credit on foreign airline programs by flying U.S. airlines. And in fact, sometimes those programs can benefit travelers more than by being a member of United’s MileagePlus or American AAdvantage.)

Who knows? With the way the industry is headed, maybe it’s a completely moot point in the future.