Warning: This is the unsexiest episode of all. Proceed at your own risk.

The kid actors of Mei Lin and Jia Sidao are, like, terrible. Whoever wrote this script is, like, terrible. Mei Lin actually tries to justify her actions after admitting that she tried to kill everyone but, seriously you gotta believe her, it wasn’t her fault. Joan Chen as Empress Chabi kicks some mother fucking ass.

Khan decides to send Chinese Keanu to assassinate Ji Sidao before the Empress Dowager’s son is coronated in Xiangyang. My mind is fading. This show reminds me of those tacky period Chinese movies that stepfather used to watch but worse. The whole point is that Marco is sent to accompany Chinese Keanu in this super important task.

The Blue Princess goes on an interview with the Empress. 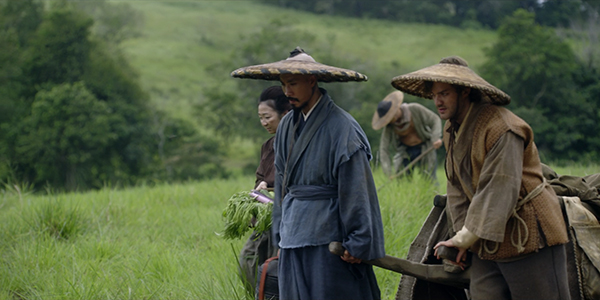 Marco finally goes to China proper. The white devil gets a pass posing as a deliveryman? In 2014, maybe (that’s a hard maybe, too). In 1271, no freaking way. Marco and Chinese Keanu embark on their mission. Chinese Keanu gets dangerously close to Ji Sidao but it is suddenly unclear as to why Chinese Keanu is running out the back with Marco. I refuse to believe Chinese Keanu could not have killed Sidao with two fingers. Sidao is mad and bloody and storms the coronation while everyone shits in their pants. This makes no sense.

The Khan goes to war.