This episode also opens up to Marco shirtless but I don’t like to see my man suffering. Turns out the Royal Concubine is also pretty good at head massages; we already know she’s good at ‘dancing.’ I’m just glad she has not tried to ‘act’ for awhile. 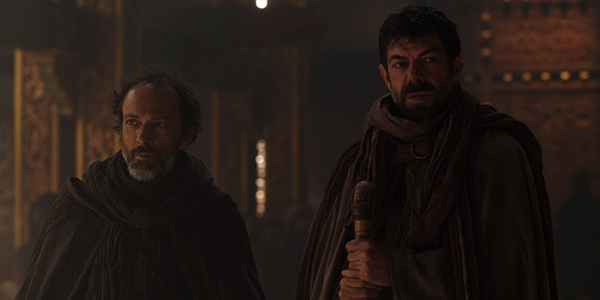 Meanwhile, Empress Chabi is not impressed with Royal Concubine. She teaches her a thing or two.

The main thing here is that there is a parley, which I guess in ancient military khan terms means that both sides are trying to broker peace. Jingim finally seems to succeed in doing something else besides being annoying. Everything seems its ripe for a happy ending but wait…. Is that the Song ambassadors being killed? But by who?

The cricket minister is a freaking creep and deserves to be burned at the stake. Marco is ordered to decide his father’s fate.