In this episode, the Blue Princess admits she doesn’t want to run away with Tulga. I can’t really blame the girl if my options were between him and Lorenzo Richelmy, either. Either way, at the end of the day, when she breaks up with you, she really means it.

It’s unclear why the Minister of Finance and the Khan’s court is harboring Mei Lin though I really doubt it is for altruistic reasons. She attempts to be cocky though she should really be thanking her lucky stars that they spared her life. The Minister reveals that they have her daughter. 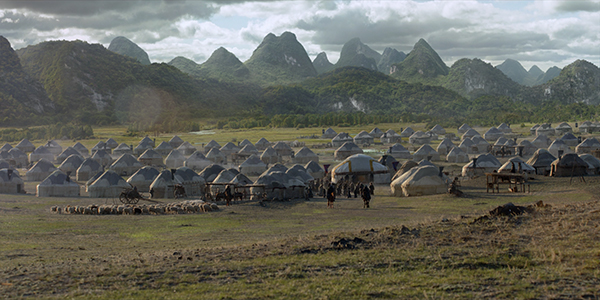 The Khan suggests another parley. Sidao isn’t aware the Empress Chabi is not dead. Predictably, the parley does not end with peace. The Khan reveals afterward that the Empress is very much alive and kicking, which means Jei Fing now has to do an elaborate dance and die by her own hand. Girl, you have the weapon in your hands.

Marco is at the front line, having a jolly old time hanging out with the captives. Later he learns that this is not a good idea when you’re dealing with the grandson of Genghis Khan. Upset, he retreats to the tent where he finds the Blue Princess where she reveals her secret vagina.

The Mongols go into battle but Marco’s story reveals the truth.