Episode 2: The Wolf and the Deer

Every time this show fails me, it comes back with some awesome scenery. Kazhakstan, I am so coming. Marco begins a Great Adventure with the Tax Collector.

Eventually, Marco gets to finally speak to his love interest, the Blue Princess, after being cockblocked in the previous episode. Totally not stalking at all.

Marco accompanies Jingim, the Khan’s son who doesn’t like Marco at all, to visit with Kublai Khan’s brother Ariq. There’s some fishy business going on in a Mongolian yurt. Everyone seems to really like to refer to each other by Title and Stereotype in this series, so I therefore dub Marco Hottie from here on out.

He’s clearly dealing with some culture shock and attempts to escape. The guy from the Matrix convinces him to stay. I’m sure there’s a hot chick involved in Marco’s decision somewhere.

It’s discovered the Tax Collector has been shortchanging the Khan. The Khan punishes him.

Meanwhile, down south, the current Song Emperor has died. In order to save herself, the Royal Concubine must fight naked. I wonder how much you have to pay someone in order for them to do it on TV? I guess everyone has a price. I’m close to proclaiming Sidao as Peter Baelish. Except Peter Baelish is infinitely more terrifying. 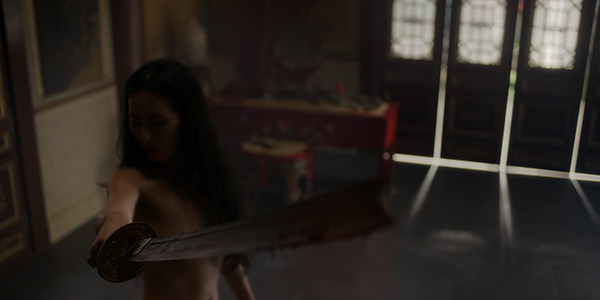 You knew this was coming. (Netflix)

The fat man somehow wins in the end. I mostly find this episode to be quite boring because the lack of gratuitous Marco.